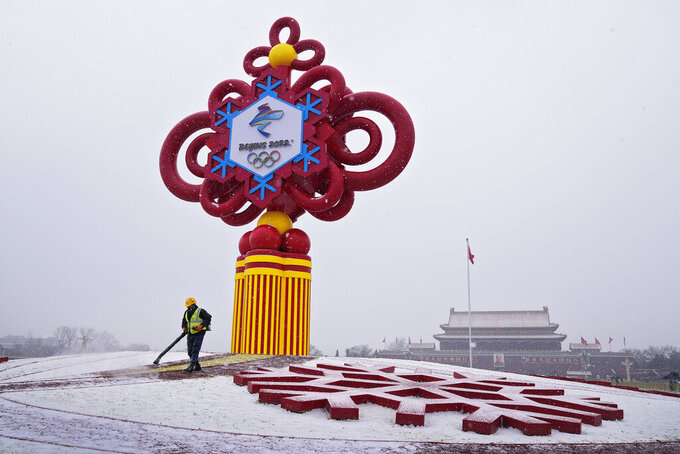 FILE - A worker wearing a face mask to protect from the coronavirus uses a blower to clean the snow on a decoration for the Beijing Winter Olympics Games on display at Tiananmen Square in Beijing, Jan. 20, 2022. The U.S. Olympic team's top doctor says all of the 200-plus athletes heading to Beijing for the Winter Games next month are fully vaccinated, and not a single one asked for a medical exemption. (AP Photo/Andy Wong, File)

ASPEN, Colo. (AP) — The U.S. Olympic team's top doctor says all of the 200-plus athletes heading to Beijing for the Winter Games next month are fully vaccinated, and not a single one asked for a medical exemption.

Chief Medical Officer Jonathan Finnoff told The Associated Press the 21-day quarantine period the IOC is requiring for unvaccinated participants, combined with the education the U.S. Olympic and Paralympic Committee provided, “really resonated with the athletes.”

“Vaccination is sort of the foundation of our COVID mitigation protocol,” Finnoff said Thursday.

In September, the USOPC introduced a policy requiring U.S. athletes to be fully vaccinated by Dec. 1 unless they had a medical exemption. About a month later, the IOC put out guidelines calling for full vaccinations or a three-week quarantine period upon entering China.

Heading into Summer Olympics in Tokyo last year, Finnoff estimated that 100 of the more than 600 Americans competing weren't vaccinated.

The U.S. will finalize the members of the winter team this week. It is expected to include about 240 athletes. Qualifying for the Paralympics is still ongoing, but Finnoff said so far, the USOPC hasn't received requests for exemptions from potential Paralympians.

The USOPC has been organizing testing and flights for the athletes, many of whom will go to Beijing on charter flights. All need two negative tests — one within 96 hours of their flight to China, and another within 72.

The federation is holding more informational meetings with athletes over the next week, at which it will reiterate the requirement of athletes to adhere to the host country's laws when considering any type of protest or demonstration.

Earlier this week, a group of human rights activists urged athletes not to criticize China for fear they could be prosecuted.

“Certainly, the culture and laws of China are distinct from ours,” CEO Sarah Hirshland said. “And we have a duty and an obligation to make sure that they’re well informed. At the same time we need to assure them that they’ve got a robust support team behind them along the way.”

With reports swirling that personal information could be compromised online in China, the USOPC joined some other countries in telling athletes to bring burner phones if possible.

Hirshland called NBC's decision earlier this week to not send on-air reporters to cover the games a case of the network doing “the right business continuity planning” to ensure they can deliver complete coverage to the United States.

Not surprisingly, Hirshland would not commit to a medals prediction. She did point out that the U.S. heads into the games with 11 athletes who are ranked No. 1 in their respective disciplines. That includes Mikaela Shiffrin in the Alpine World Cup overall standings and Red Gerard in the World Snowboard Points list for slopestyle.

The U.S. won 23 medals at the Pyeongchang Olympics, good for fourth on the medals table.

“You add the potential for COVID and we face the same reality as we did going into Tokyo, unsure what the starting lines will look like,” Hirshland said. “But we're not in a distinct situation from the rest of the world. We're all facing the same challenges.”