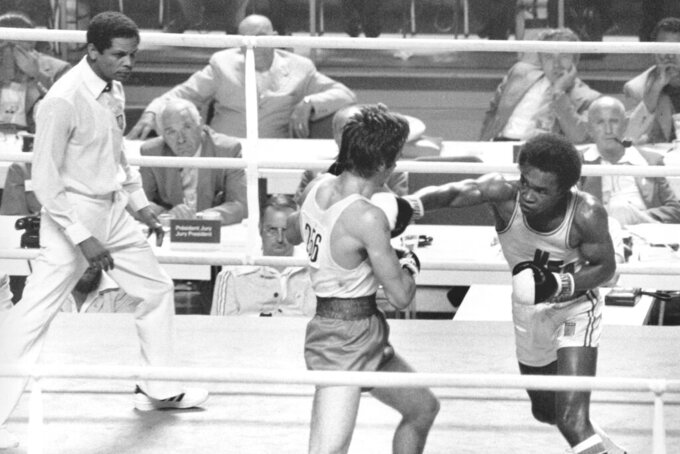 FILE - In this July 29, 1976, file photo, the United States' Sugar Ray Leonard, right, throws a right at Kazmier Szczerba, of Poland, during the light welterweight boxing match at the Summer Olympic Games in Montreal. (AP Photo/File) 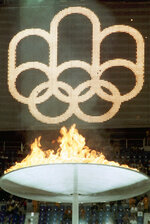 EDITOR’S NOTE — With the Tokyo Olympics postponed for a year due to the coronavirus pandemic, The Associated Press is looking back at the history of Summer Games. AP Sports Writer Tim Reynolds interviewed Nadia Comaneci about her “perfect” performance at the Montreal Olympics and her life since.

Nadia Comaneci did not expect perfection. Apparently, nobody else did either.

There were digital scoreboards inside the gymnastics venue at the 1976 Montreal Olympics, where the numbers would pop up after each athlete completed an event. High-tech for that time, the scoreboard was programmed to light up three digits — with a decimal place affixed after the first number.

And even though a perfect score would be a 10.00, the way the scoreboards were set up meant the highest score, in theory, that they could reveal would be a 9.95.

“The International Gymnastics Federation said, ‘Don’t worry, because nobody’s going to score a 10,’” Comaneci said. “So, I guess I messed them up, too.”

The mess she created was historic.

Comaneci, then a 14-year-old Romanian girl with a ribbon tied in her hair, stole the show at the Montreal Games when she became the first gymnast to score a perfect 10 at an Olympics. She wound up getting a staggering seven of those scores in Montreal, on the way to winning three gold medals and five medals overall at those games.

At an Olympics where there were countless stars and breakout moments — American track star Edwin Moses beginning his reign as the world’s premier 400-meter hurdler; a stacked U.S. boxing team led by Sugar Ray Leonard, Leon Spinks and Michael Spinks dominated the ring; Caitlin Jenner, then known as Bruce Jenner, won the decathlon; and a West German fencer named Thomas Bach won a gold medal long before he would become president of the International Olympic Committee — the Romanian teen rose above all others.

“I’m not sure what was the definition of perfection and whatever that meant,” said Comaneci, who was selected in 1976 as the global female athlete of the year by The Associated Press. “I think people didn’t expect a 10 probably, or they didn’t expect history to be made, but that was not my goal because I was not aware of any of this. So, my goal was to not make a major mistake and hit the ground.”

She won golds in the all-around competition, the balance beam and the uneven bars — the discipline where the first perfect 10 was earned. Comaneci also helped Romania win a silver in the team competition and took a bronze in the floor exercise. The only event where she didn’t medal was the vault, placing fourth there, a mere 0.025 points from silver and 0.175 points from gold.

Romania's Simona Halep, the world’s No. 2-ranked women’s tennis player, was born 15 years after Comaneci’s Montreal exploits. Halep never dabbled in gymnastics but said what Comaneci did generations ago still spurs on any athlete from that southeastern European country.

“Nadia was an inspiration for all of us,” Halep said at the U.S. Open last year. “Doesn’t matter which sport we had to do at that time. And she’s still a motivation for everybody.”

Comaneci won two more golds and four more overall medals at the Moscow Olympics in 1980. In 1989, just weeks before the revolution that toppled Nicolae Ceausescu, she slipped across the border to Hungary and defected to the U.S. And in 1996, she and fellow Olympic legend Bart Conner returned to her homeland for their wedding.

About 2,000 Romanians gathered outside to watch that ceremony on a video screen. Later, they cheered when Conner, in near-perfect Romanian, asked the crowd to accept him as one of theirs.

Conner and Comaneci still live in Norman, Oklahoma, where Conner won NCAA all-around titles in 1977 and 1978 to lead the Sooners to back-to-back national championships. The couple trains young gymnasts, host competitions and offer a free three-day event called The Bart and Nadia Sports Experience to about 10,000 kids each year.

“The kids get introduced to sports, little kids that don’t know yet what they want to do,” Comaneci said. “They have fun, they try all the sports ... and then they get a medal at the end. So, they get to know what sports are all about, and if they kind of fall in love with one or the other sports they sign up for them.”

Most of the kids know about Comaneci’s achievements. But to kids, 44 years ago seems like a really long time.

“Imagine an 8-year-old girl who comes with her mom and competes and she’s all excited,” Comaneci said. “I’m in an elevator with the girl. The mom is trying to tell the girl, get her attention and say, ‘It’s Nadia.’ I was in next to her. And the little girl said, ‘She’s alive?’

Yet it lives on.

Those Montreal scoreboards, instead of saying 10.00, could only display 1.00.

It’s fitting, in a way. After all, Comaneci’s perfect 10s made her the Perfect One.