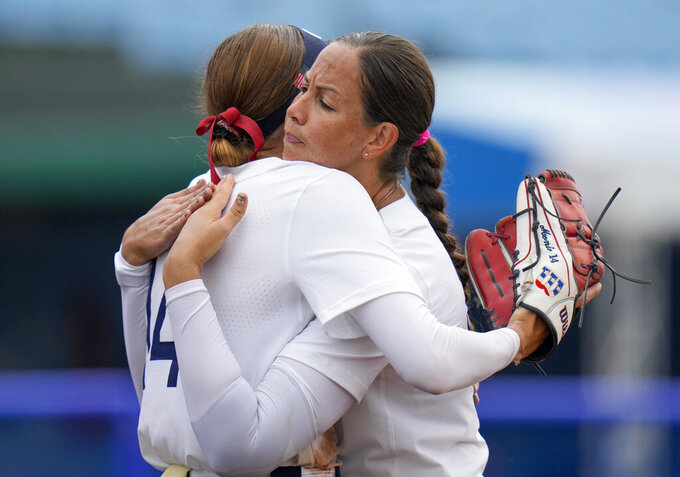 FUKUSHIMA, Japan (AP) — Six outs from her second Olympic no-hitter, Monica Abbott was clinging to a one-run lead when she walked Canada's Jen Gilbert leading off the sixth inning, and pinch-hitter Sara Groenewegen lined a 0-2 pitch to the right-center field gap.

Center fielder Haylie McCleney picked up the ball at the wall and fired to Ali Aguilar. The second baseman made a perfect one-hop throw to catcher Aubree Munro, who moved up the third-base line and swiped a tag on sliding pinch-runner Joey Lye for the out.

“It's fun to be on the mound to watch that,” Abbott said after her one-hitter led the United States over Canada 1-0 on Thursday in the first of three one-run softball games. “I don't want to give up a hit like that, but, man oh man, it took a lot of confidence in me on our defense."

Amanda Chidester hit an RBI single in the fifth off loser Jenna Caira that scored McCleney, who went 3 for 3 with a walk and has reached base seven times in two games.

Trying to regain the gold medal it lost to Japan in the 2008 final, the U.S. improved to 2-0. After a day off for the opening ceremony in Tokyo, the tournament shifts to Yokohama on Saturday.

Abbott, 6-foot-3 and slim, has a Randy Johnson-like reach that reduces her release point from the 43-foot rubber to about 37 feet from the plate. Pitching a week before her 36th birthday, she struck out nine, walked three and needed 102 pitches in the Americans’ second consecutive one-hitter.

Cat Osterman, at age 38 the Americans’ senior player, struck out nine over six innings and Abbott struck out the side in the seventh to finish Wednesday's opening 2-0 win over Italy.

“Once you start thinking about it, it always ends up being broken up,” Abbott saidof the no-hit bid. “So as soon as it popped into my head, I was like, no — no, no, no, no, no, don't think about it.”

“I felt good rounding third,” she said. “We live to play another day.”

Munro made sure not to obstruct the runner.

“That was the first drill that we did in 2011 and what we do every single year on the first day of practice,” he said. “That can win gold medals."

Groenewegen took third on the throw, but Abbott stranded pinch-runner Janet Leung when Victoria Heyward flied out and, after an intentional walk, Kelsey Harshman struck out.

The U.S. was 1 for 8 with six strikeouts with runners in scoring position, but the 1 was enough.

McCleney popped a single into short left with one out in the fifth. Janie Reed, whose husband, Jake, was designated for assignment by the Los Angeles Dodgers in the hours before the game, sacrificed and Chidester — who is engaged to Mexican infielder Anissa Urtez — lined a 1-2 pitch on the outside corner to the opposite field into right.

There was a spring training intrasquad feel, a day after many officials attended the opener. The stadium, about 40 miles from the site of a 2011 nuclear power plant disaster, was almost empty because fans were banned due to the coronavirus pandemic. There were 30 media and officials in the stands and approximately a dozen photographers on the field.

“We feel bad that the people of Fukushima were not able to tell their story, that we weren't able to go out into the community to see the story,” Eriksen said. “It's really devastating to the people here not to really show the world that Fukushima is back. It's resilient. It's a beautiful place. It's gorgeous. This venue is gorgeous at the base of the mountains.”

Mana Atsumi's squeeze bunt single with one out in the eighth inning scored automatic runner Eri Yamada, and host Japan improved to 2-0.

Haruka Agatsuma's grounder to second off Danielle O’Toole advanced Yamada to third, and Atsumi bunted toward third on a 0-1 pitch. Yamada was running on the pitch and slid home ahead of Amanda Sanchez's throw.

Mexico, 0-2 at its first Olympics, tied the score 2-2 when Yamada dropped Anissa Urtez's fly to center in the seventh for what was ruled a single.

After winning the opener, Yukiko Ueno struck out 10 and took a three-hitter into the seventh on her 39th birthday but walked Suzannah Brookshire leading off and allowed a single to Victoria Vidales that put runners at the corners for Urtez.

Winner Miu Goto relieved with two on and got three straight outs, then stranded the bases loaded in the eighth when she threw a called third strike past Valdes, her fifth strikeout in two innings.

Yamato Fujita homered in the second inning, Urtez tied the score with a home run in the fifth and Agatsuma hit a go-ahead double in the bottom half.

Jade Wall hit a run-scoring single in the second inning, Kaia Parnaby took a three-hitter into the seventh and Australia evened its record at 1-1 following an opening loss to Japan. Australia is fourth among the six teams, and Italy fell to 0-2.

Taylah Tsitsikronis doubled off Greta Cecchetti leading off the second, advanced on Tarni Stepto's groundout and scored on a two-out infield hit by Wall, who beat the throw to first after second baseman Andrea Filler's diving, backhand stop.

Ellen Roberts, who played college ball for Memphis, made her Olympic debut after Parnaby had thrown 85 pitches, and Marta Gasparotto took a called third strike.