'An answer for everything': Djokovic in Olympic medal rounds 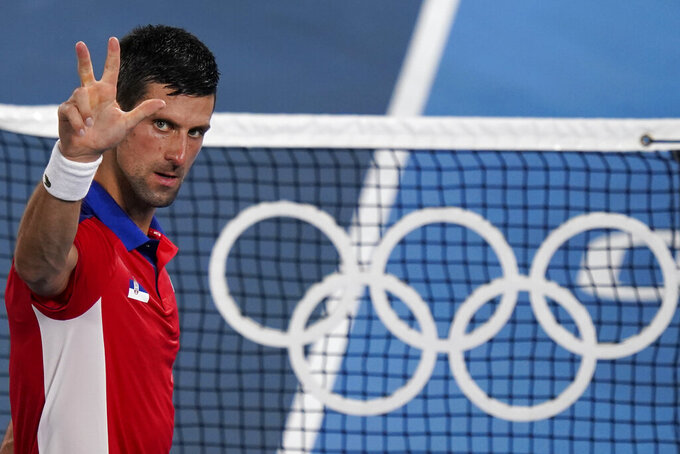 Novak Djokovic, of Serbia, celebrates after defeating Kei Nishikori, of Japan, during the quarterfinals of the tennis competition at the 2020 Summer Olympics, Thursday, July 29, 2021, in Tokyo, Japan. (AP Photo/Seth Wenig)

The top-ranked Serb never gave Nishikori a chance in a 6-2, 6-0 rout of the home favorite from Japan to reach the semifinals of the tennis tournament at the Tokyo Olympics on Thursday.

“He was defending amazing today — everything deep — and I was trying to stay with him but I couldn’t,” Nishikori said. “I thought I was playing OK but my serving was bad today and he was attacking every (time)."

The dominant performance advanced Djokovic into the medal rounds and — more importantly — moved him one step closer to finishing off this segment of his Golden Slam bid.

In the women’s tournament, 12th-ranked Belinda Bencic of Switzerland and 2019 French Open finalist Marketa Vondrousova of the Czech Republic will meet in the gold-medal match.

Bencic beat Elena Rybakina of Kazakhstan 7-6 (2), 4-6, 6-3 and Vondrousova — who eliminated Naomi Osaka in the third round — defeated fourth-seeded Elina Svitolina of Ukraine 6-3, 6-1.

Djokovic — who is in his third Olympic semifinal but has never made it to the gold-medal match — will next face Alexander Zverev of Germany, who beat Jeremy Chardy of France 6-4, 6-1.

The other semifinal will feature Karen Khachanov of ROC against Pablo Carreno Busta of Spain. Khachanov beat Ugo Humbert of France 7-6 (4), 4-6, 6-3 and Carreno Busta defeated second-seeded Daniil Medvedev of ROC 6-2, 7-6 (5).

After losing, Medvedev smashed his racket then threw it into the upper deck of the empty Court 1 stands.

Djokovic, who has already won the Australian Open, French Open and Wimbledon this year, needs the Tokyo Games title and the U.S. Open trophy to become the first man to achieve the Golden Slam.

As it's been for months, it seems that Djokovic, who has not dropped a set in the tournament, is getting better match by match — so much so that it looks like he's hardly being tested.

“Matches are not getting easier but my level of tennis is getting better and better and and I’ve done that so many times in my career," Djokovic said. “I’m (the) kind of player that the further the tournament goes the better I’m feeling on the court and that’s the case here.”

There was really only one moment when Djokovic was in slight trouble. It came in the opening game of the second set when Nishikori held a break point. Djokovic responded with a rally that sent Nishikori scrambling from corner to corner before unleashing a forehand cross-court winner that the Nishikori couldn’t come close to getting his racket on. That prompted a loud roar from Djokovic

After it was done, Djokovic called it his “best performance" of the tournament.

“Against (a) very good opponent,” he said. ”I felt like I had an answer for everything he had.”

Djokovic then came back out less than two hours later and won in mixed doubles with partner Nina Stojanovic, beating the German pair of Laura Siegemund and Kevin Krawietz 6-1, 6-2 to reach the semifinals in that event, too.

Bencic became the fifth player to reach two finals at the same Olympics since tennis returned to the Games in 1988, joining Serena and Venus Williams, Andy Murray and Nicolas Massu.

The results means that Switzerland is guaranteed a tennis medal — two, actually — at a fourth consecutive Olympics after Federer and Stan Wawrinka won gold in doubles in 2008, Federer took silver in singles in 2012 and Martina Hingis and Timea Bacsinszky claimed silver in doubles in 2016.

Federer announced a week before the Tokyo Games began that he wouldn’t play at the Olympics because he “experienced a setback” with his knee during the grass-court season. That left Bencic as Switzerland's most accomplished player in Tokyo and her performance represents a personal breakthrough for someone whose best Grand Slam result was reaching the semifinals at the 2019 U.S. Open.

Vondrousova hasn't dropped a set since the first round.

“Since I beat Naomi, I was thinking I am playing well so maybe I can do better and now I am in the final,” Vondrousova said.

Play started four hours later than on previous days after organizers finally acted upon a request from players to avoid the hottest part of the day.

In men's doubles, an all-Croatian final was set up between the pairings of Marin Cilic-Ivan Dodig and Nikola Mektic-Mate Pavic.

The women's doubles final will feature Bencic and Golubic against the top-seeded Czech duo of Barbora Krejcikova and Katerina Siniakova. Krejcikova won both the singles and doubles (with Siniakova) titles at this year’s French Open.