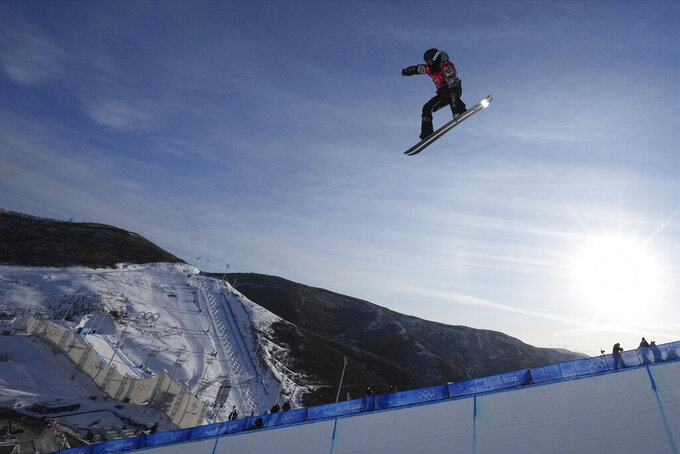 Less than 24 hours after snowboarding's global icon took his final competitive halfpipe ride at the Olympics, he was bound for the airport. The destination: Los Angeles to watch his first Super Bowl in person.

White said his girlfriend, actress Nina Dobrev, has been suggesting he get busy making a list of things he wants to do in retirement “so I'm not sitting around twiddling my thumbs.”

“I’ve been to the house parties and stuff. Never been to the game, so I’m excited to check that off the list,” White said in a phone interview with The Associated Press, as he rode to Beijing on Saturday to catch a late-night flight.

After that, he'll take some time to relax.

The build-up to his last contest, then the tear-stained aftermath of his fourth-place finish, have been an emotional roller coaster for the three-time champion.

“I woke up this morning and I just felt this peacefulness,” White said. “It was amazing to know I have so much ahead of me.”

White said his phone has been blowing up — all of it supportive. And though no single athlete has meant more to the sport of snowboarding than the 35-year-old Californian, he conceded he had been nervous about what kind of reaction he'd get.

“As a competitor, I always wanted to be on the podium and I didn’t know if people would still respect my legacy,” he said.

He put down a solid run to get into medal contention, but with a chance to move up one spot and land on the podium, his legs grew weak and he fell as he tried the second of back-to-back 1440s — one of the toughest combinations in the sport.

The less-than-perfect performance, his emotional reaction to it, and even his worries about what others would think — all of that revealed the softer side of White, who grew from “The Flying Tomato” to a multi-platform sports and business icon in front of the world's eyes. The past week in the mountains above Beijing have triggered an outpouring of feelings along every step of the way.

Any second thoughts about his decision to hang it up?

“The initial competitive reaction was, ‘Oh, I almost had the podium and I want to come back and try that again,’” White said. “It’s one of the things that’s driven me to be one of the best in sports. But I think I’m going to enjoy this new lifestyle much better.”

Dobrev took to social media and praised her boyfriend, saying: “You will forever be the G.O.A.T. of snowboarding. Not to mention you are also the G.(B).O.A.T. = Greatest Boyfriend Of All Time.”

“I couldn’t be more proud. Of everything you have accomplished over the last 20 years as a competitor and the man you have become,” she wrote.

White's next chapter will include a dive back into business.

He has combined with his brother, Jesse, to launch a new snowboard brand, Whitespace. He said a first run of snowboards sold out online in 15 minutes. White is also owner of a music-and-competition event, Air & Style, which could get fresh legs if COVID-19 subsides.

White said one of his realizations as he weighed whether to retire was that “instead of beating these guys out here, I want to start sponsoring them.”

He's still figuring that part out. He said offering advice and helping a few young riders find their way in the sport is intriguing. A dip into coaching — at least in the way that his buddy and coach, 2002 bronze medalist J.J. Thomas is doing it — might take a little longer.

“I would need time before I did something like that, and it would have to be a very special situation,” White said. “But definitely supporting in some capacity would be very enjoyable, I think.”

But before that, some rest.

Even for a megastar used to traveling the globe, the last four months have been a lot. There was a long stretch in Europe for training, which also led to the decision to retire.

There was a hectic swing through qualifying events, which were hampered by an ankle injury, a bout with COVID-19, a broken binding in one contest, then a quick unexpected trip to Switzerland to secure his spot on the team.

And then China. It was not an easy trip for anyone, and for White, it was made all the more hectic — and emotional — because the spotlight was shining on the final performance of his one-of-a-kind career.

“Advice I've got from others is ‘Just take a second,'" White said. “I just want to take a pause and really soak in this moment, everything I've done and earned and enjoyed, and then see what sparks my interest.”