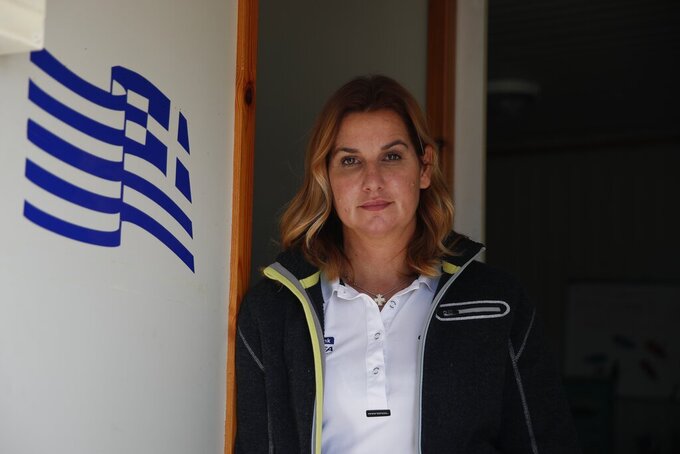 Greek Olympic sailing champion Sofia Bekatorou poses for a photograph during an interview for the Associated Press, at Agios Kosmas marina in southern Athens, Thursday, Feb. 4, 2021. Bekatorou is the most successful female athlete in Greek sporting history who recently revealed that she was the victim of a sexual assault, allegedly by a senior sports official in 1998. In an interview with The Associated Press, Bekatorou said she was glad those revelations are having an impact in a country long accustomed to cronyism and senior-level impunity.   (AP Photo/Thanassis Stavrakis)

ATHENS, Greece (AP) — Before she could join sailing classes near her home in Athens, Sofia Bekatorou had to show an instructor she could tie a basic knot properly. Passing the test at age 8 changed her life.

Bekatorou spent her first afternoons in a bathtub-sized sailboat stuck in circles, but coaches took note of the girl's determination. By her 12th birthday, she was outperforming the boys in competitive races and on a path to winning gold medals as a world champion and at the Olympics.

But the most successful woman in modern Greece’s sporting history revealed in January that an incident almost 23 years ago had marred much of her personal happiness and professional career — an alleged sexual assault by a Greek sailing federation official at a hotel in Palma de Mallorca, Spain.

Her disclosure was made at a little-advertised online sports seminar, but it gained national attention and elicited statements of support for Bekatorou from the country’s prime minister and first female president. It was followed by dozens of public claims of sexual misconduct and workplace intimidation in the worlds of elite sports, the performing arts, and academia.

Bekatarou, 43, said she hoped the reaction marked a turning point for Greek society, which often seems resigned to official cronyism and impunity.

“I’m very happy that they came forward and spoke out,” she said in an interview with The Associated Press,. “We need to embrace people who have lived through such experiences, because it’s a very big step, even talking about it.”

Bekatorou won a gold medal in the women's double-handed dinghy event with teammate Emilia Tsoulfa at the 2004 Summer Olympics, which was held in Athens.

Greeks caught televised glimpses of the many successes that followed: the keelboat race that returned her to an Olympics podium four years later in Beijing, and opening the parade of nations for the 2016 Rio de Janeiro Summer Games as the first female flag-bearer ever to lead the Greek Olympic team.

Bekatorou dedicated the honor at Maracana Stadium to her older sister, Varia, who had died of brain cancer four months earlier. Her long run in top-tier competition included a battle with a career-threatening back injury and, as she recently revealed, years of therapy. Reserved and soft-spoken, Bekatorou says the sailing federation official sexually assaulted her in 1998, on the day she celebrated qualifying for the Sydney Olympics. Neither she nor prosecuting authorities have publicly identified the accused official, who has denied the allegations.

Along with her Olympic medals, Bekatorou brought home four World Championship titles and a shelfful of national and European trophies. She was twice named World Sailor of the Year. In recognition of her accomplishments, she was given the rank of major in the Greek army.

But she alleges that the the official who assaulted her also undermined her position on the national sailing team over nearly 20 years, arguing that priority should be given to younger competitors.

“It’s a very big weight that we carry in our personal life. And these are things that can actually put you in a deep depression for a very long time," Bekatorou said. “And unless you have the (right) help and environment, it’s not easy to overcome it and move on.”

The accused official was fired last month from senior posts at the Hellenic Sailing Federation and the Hellenic Olympic Committee. He called Bekatorou's allegations “defamatory and deceitful.”

The alleged assault has exceeded a 15-year statute of limitations, but a public prosecutor has agreed to examine the case for other possible victims.

Bekatorou said the impact of her revelations had taken her by surprise.

She smiled when asked about future plans and the test given to her when first learning to sail. Demonstrating her knowledge, and the skill she picked up as an 8-year-old, she looped a piece of microphone cable into a bowline knot.

“I’ll have to sail on bigger boats that are less physically demanding, but I don’t really like the idea of being called a former competitor.”

She is happy, she said, to be associated with the #MeToo movement that followed the allegations of past sexual misconduct that exploded in 2017 and the subsequent conviction of Hollywood film producer Harvey Weinstein.

When the allegations emerged in the entertainment industry, “I was feeling, you know, something really strong coming from inside, but I wasn’t ready to deal with it. And I didn’t want just to talk about it. I wanted to change something,” Bekatorou said.

“And I knew that in order to change something, I had to be ready, whether someone would follow me or no one would….Now, I’m ready.”