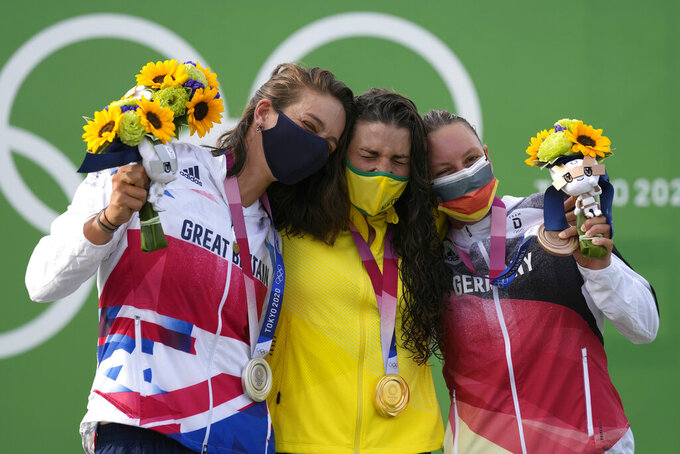 Jessica Fox of Australia, centre, holds the gold medal Mallory Franklin of Britain, left, holds the silver medal and Andrea Herzog of Germany, right, with the bronze medal in the Women's C1 of the Canoe Slalom at the 2020 Summer Olympics, Thursday, July 29, 2021, in Tokyo, Japan. (AP Photo/Kirsty Wigglesworth)

TOKYO (AP) — For years, Australia's Jessica Fox was among those pushing to get women's canoe slalom accepted as an Olympic sport.

With a history-making gold medal within her reach, she was not going to miss her chance.

Starting last with an eye on the time she had to beat, Fox shot out of the gate on Thursday and ripped through the rapids at the Kasai Canoe Slalom Center to victory in 105.04 seconds, beating friend and rival Mallory Franklin of Britain by more than three seconds for the gold.

The women’s canoe slalom is one of 18 new events introduced to the Olympics this year in a push for gender equity. It replaced the men’s double canoe slalom.

"I can't believe it, I'm so proud to be here today. I'm so proud of all the women who have raced here and been part of this moment. And grateful to all the women, all the coaches, all the people who lobbied for gender equality in our sport and have us here," Fox said.

And it was quite a comeback for Fox, who came to Tokyo as a heavy favorite to win gold in the canoe and kayak slalom. The goal of double gold fell apart Tuesday with a hit gate and time penalty in the kayak slalom final. She won bronze instead.

“I think I re-lived my kayak race a million times in my head ... It was very taxing. I had to do a lot of mental work over the last 48 hours, but it just shows I've done the work the last four or five years and I'm really proud of that," Fox said. “There was a lot of relief at the finish line. I've never been as nervous as I was today.”

Fox showed none of that in the boat. She and Franklin came to the Games ranked 1-2 in the world and the final set up the showdown the sport expected.

Franklin went fifth in the final and snatched the lead with a run of 108.68 seconds that included a 2-second time penalty for touching a gate. When it was finally her turn, Fox was flawless. No mistakes. Even if Franklin had avoided any penalties, she still would have been second.

“It was a really good run," Franklin said "She was better.”

Fox said she was waiting in the warm-up pool and listening to the time each paddler posted, when she grasped the history-making moment that awaited.

“I thought to myself, 'This is what I wanted. I wanted a great final,'” Fox said.

Franklin said she also is proud to be among the women's medal pioneers for the sport.

“For us to be able to come here and produce that kind of final, it just shows how far the women have come,” Franklin said.