Canada beats US behind Gushue to win Olympic curling bronze 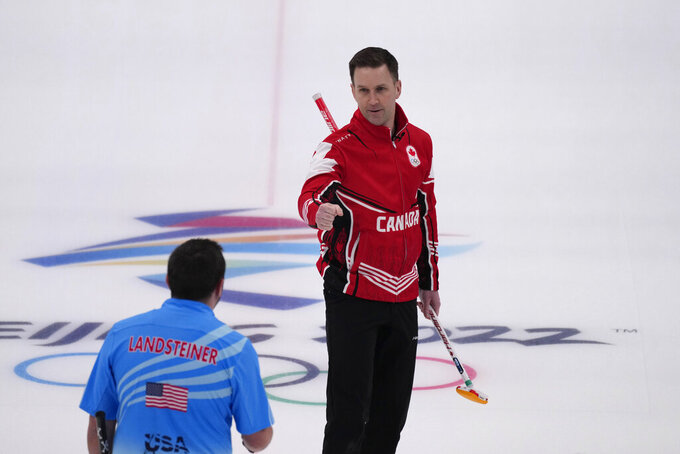 He ended it empty-handed, losing 8-5 in the bronze medal match to Brad Gushue and Canada.

“I'm not retiring, but that doesn't mean I'll ever get back here,” said Shuster, who would be 43 for the 2026 Games in Milan and Cortina. “No matter what happens, I’m so happy and proud and love playing with these guys, and I hope they want to keep doing it.”

Gushue returned to the podium 16 years after he won gold in Turin — beating an American team that included Shuster in the semifinals. Four years ago, Canada was shut out in the men's and women's events for the first time since the sport returned to the Winter Games in 2002.

All three Canadian curling teams in Beijing finished the round robin 5-4, but the women and mixed doubles teams missed the playoffs on a tiebreaker.

“I’m sure people are going to talk about why we didn’t win gold. And rightfully so," said Gushue, who was teamed this time with Mark Nichols, Brett Gallant, Geoff Walker and alternate Marc Kennedy.

“We’ve been a very good team for a long time," Gushue said. "But this is not easy; this is hard.”

Gushue shared the podium in Turin with Shuster, who won bronze. Shuster has been back at every Winter Games since, winning it all in Pyeongchang four years ago.

“He’s a freak, man. Like, five Olympics and we’re going to hopefully go for six. That guy’s an absolute animal,” U.S. second Matt Hamilton said. “The guy’s an awesome dude and a great teammate, and just I’m lucky to be on his team.”

Gushue wasn’t able to get through the ultra-competitive Canadian Olympic trials again until this year.

“The fact that I was away for 16 years, this whole experience means a lot,” he said. “Even if we lost today, we’ve made the most of the experience. At 41, those are the things you remember more than at 25, when it’s all about winning. The perspective has changed dramatically.”

Canada’s third-to last shot in the 10th end cleared all of the American rocks out of the target area, leaving no chance for the U.S. to tie the match. Shuster immediately conceded.

“You could argue that fourth place is the worst spot to finish in the tournament. And I still love my team, and I love curling,” Hamilton said.

“It would have been great to win a medal. But at the end of the day, these guys are still my boys,” he said. “When I get back to the States, I’m still going to go to their house for a barbecue and a beer, and we’re going to get ready for the next Quad and see what we got.”