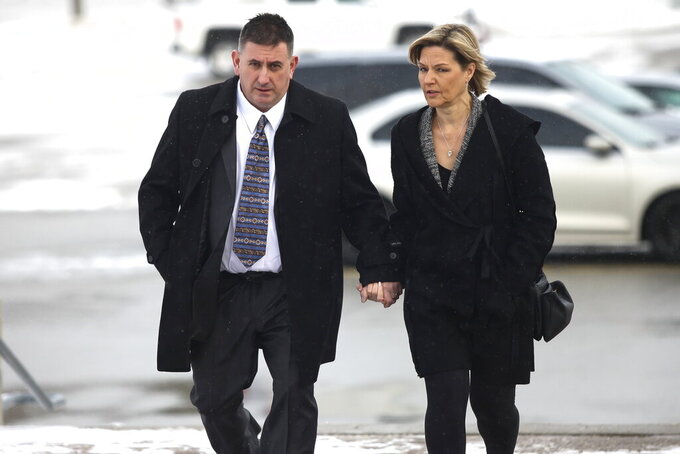 Former Canadian gymnastics coach Dave Brubaker arrives at a courthouse with his wife Elizabeth Brubaker in Sarnia, Ontario, Wednesday, Feb. 13, 2019. A former member of the Canadian national gymnastics team wrote a public letter accusing the country's 2016 Olympic coach of climbing into bed and pressing his body up against her, reaching his hand underneath her shirt and trying to talk her into exposing her breasts. The letter by Abby Pearson Spadafora, 38, revealed the latest in a long series of allegations of sexual, emotional and physical abuse by coaches Dave and Elizabeth Brubaker, who have been banned by Gymnastics Canada. (Mark Spowart/The Canadian Press via AP)

A former member of the Canadian national gymnastics team wrote a public letter accusing the country’s 2016 Olympic coach of inappropriate and unwanted touching.

The letter by Abby Pearson Spadafora, 38, revealed the latest in a long series of allegations of sexual, emotional and physical abuse by coaches Dave and Elizabeth Brubaker, who have been banned by Gymnastics Canada. Spadafora accused the coach of climbing into bed with her and of reaching his hand underneath her shirt.

“The abuse never stopped,” Spadafora wrote in her letter released Thursday. “My male coach would regularly snap the back of my sports bras when I started wearing them. I was taught that gaining weight and puberty were a bad thing. Injuries were rarely taken seriously, and I was taught to hide the pain.”

Spadafora said she started training 25 to 35 hours a week at age 7, and was weighed twice a day.

“This is when the grooming began that led to years of abuse,” she said of her training, which began around 1991.

A group of 11 gymnasts, including Spadafora, have come forward to detail abuses at the Bluewater Gymnastics Club in Ontario. They took part in an investigation by Gymnastics Canada that led to the Brubakers' bans. Spadafora and another athlete have criticized the investigation. saying it retraumatized them because they were urged not to say anything publicly for fear it would be used against them in the hearing process.

Some 480 athletes have signed a petition asking the Canadian government to commission an independent third-party investigation into abuses at the club.

Dave Brubaker, who coached the Canadian Olympic team in 2016, was found not guilty of sexual assault and sexual exploitation in 2019 after the judge in the case involving a former gymnast disclosed that the officer investigating Brubaker was related to the alleged victim.

His lifetime ban from Gymnastics Canada, and his wife's ban through Jan. 18, 2024, was handed down earlier this year after a disciplinary panel confirmed 54 counts of misconduct by the Brubakers. The Brubakers initially appealed their bans, but in March withdrew the appeals.

The attorney who represented the Brubakers in the sexual assault trial, Patrick Ducharme, did not immediately return an email from The Associated Press.

In her open letter, Spadafora said the abuse was mostly physical in the early years. She described an episode in which her coach put her in a handstand on a low bar, 5 feet off the ground, then pushed her hands off the bar to force her to crash into the mat headfirst.

“He repeated this several times and not once did he check me for a concussion,” she wrote. “I was eleven! I was petrified and wanted to cry, but I knew I couldn’t for fear of retribution.”

The advocacy group Global Athlete released a statement saying Spadafora should be applauded for the bravery to come forward and tell her story.

“Her brave stance in sharing her lived experience must be shared to stop such normalized behavior," the statement said.