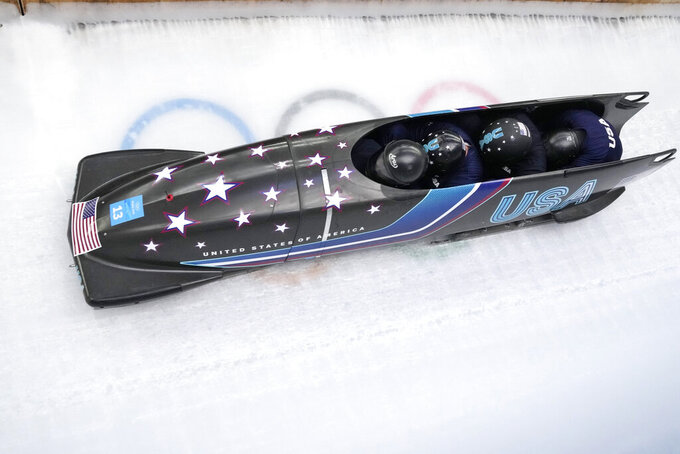 Frank Delduca of the United States and his team drive their 4-man bobsled during a training heat at the 2022 Winter Olympics, Wednesday, Feb. 16, 2022, in the Yanqing district of Beijing. (AP Photo/Dmitri Lovetsky)

BEIJING (AP) — Carlo Valdes is already set up for life after bobsled. He owns a financial planning practice, something he started a few months after the Pyeongchang Olympics. And he could be working with customers to help them with their futures full-time right now, if he was so inclined.

Instead, he’s at one final Olympics.

The reason: He had to make sure USA Bobsled had a plan for its future before he retired.

Barring a change of heart, which seems unlikely, the Beijing Games will be Valdes’ final competition. He’ll be on the crew that pushes the U.S. sled driven by Frank DelDuca in the four-man event that starts Saturday and ends Sunday, the final day of the Olympics.

“I want to make sure I’m helping these young guys out, not just helping them get through this Olympic year, but beyond that,” Valdes said. “For me, this is my last go-round. I want to do my best to make sure that they understand what it takes to run a sled and help keep the pilots calm, do whatever they can to make sure everything’s taken care of, so the pilots can just focus on getting down the track. That’s how successful teams do it.”

And Valdes knows what it takes to be successful.

He’s been part of 10 medal-winning rides for the U.S. in World Cup competitions, is a two-time Olympian and raced in three world championships. He was the final person to push Steven Holcomb’s two-man sled in competition, was part of Holcomb’s final four-man team and has been sliding internationally since some members of this U.S. Olympic team were in high school.

“He is an awesome role model,” said first-time Olympian Charlie Volker, a 24-year-old who is part of what USA Bobsled is counting on as the next wave of top-notch push athletes. “He talked me down a few times when I was getting nerved up before the season. I had these small injuries that kept recurring, and I think a lot of it was stress-related. And Carlo would just say, ‘Do what you do, control what you can control.’ Simple. Carlo helped me like a wise old teacher, a wise old man, someone who’s been there, done that.”

Valdes is here to make sure the Americans end this Olympic cycle the right way, and in turn, it’s not lost on his U.S. teammates that this is his finale.

It’s fitting that he never was a driver. Valdes prefers to be in the back of the sled, never wanting attention of any sort other than believing that he has one of the world’s finest mustaches. He loathes “dad jokes,” the sort of one-liners that tend to draw something between groans and polite laughter. They bother him so much that veteran U.S. skeleton athlete John Daly would randomly place FaceTime calls to Valdes to tell such jokes. Daly even had a logo made up for the “Daly Dad Jokes,” would post Valdes’ grumpy reactions to them on his social media platforms and always ended the calls with a promise to make another the following day.

Even in Beijing, Valdes begged teammates to stop singing “Happy Birthday” to him on the day he turned 32 last week. Around the 20th or so version of the song, they honored his request.

It’s all done out of intense respect. Valdes is beloved. The team already knows he’ll be missed.

“I’ve done my best,” Valdes said. “I just want to leave the sport in good hands and I tried to teach these guys everything I could.”