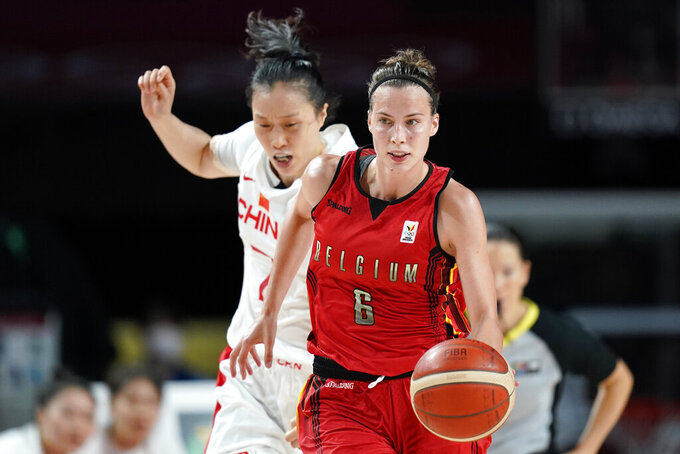 Belgium's Antonia Delaere (6) drives up court ahead of China's Ting Shao (7) during a women's basketball preliminary round game at the 2020 Summer Olympics, Monday, Aug. 2, 2021, in Saitama, Japan. (AP Photo/Charlie Neibergall) 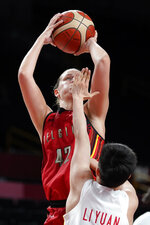 Both China and Belgium had already qualified for the quarterfinals with only seeding on the line when they played. China (3-0) finished atop Group C, while Belgium (2-1) remains one of the four seeded teams in the quarterfinals based on point differential.

Belgium led 21-17 after the first 10 minutes but China was up 38-37 at halftime. The lead was cut to one with 1.3 seconds left when Emma Meesseman hit two free throws after Huang Sijing was accessed an unsportsmanlike foul, her second.

Meesseman had 20 points by halftime but only scored four in the second half.

The Chinese led 59-52 after the third quarter and never trailed again.

Li Meng added 11 points for China, and Yang Liwei and Pan Zhenqi each had 10.

A scary moment came with 3:18 left in the game. Kim Mestdagh was chasing a loose ball and apparently hit around her throat in a collision. She seemed to have trouble breathing and grabbed at her throat before being helped to the bench a couple minutes later. She never left the bench area but didn't return.