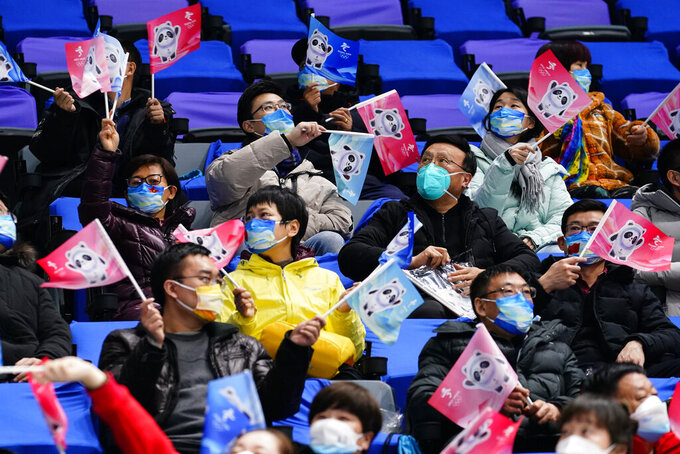 Spectators cheer during a preliminary round men's hockey game between China and Canada at the 2022 Winter Olympics, Sunday, Feb. 13, 2022, in Beijing. (AP Photo/Matt Slocum)

BEIJING (AP) — A spectator’s single clap echoed through the mostly empty National Aquatics Center after the British curling team knocked a Swiss stone out of position, a difficult move that usually would trigger cheers from fans.

The spectator looked around at the audience of about 200, surrounded by thousands of vacant seats, and stopped clapping.

Halfway through ten sets of curling, as teams shouted in Russian, Norwegian, Swedish, French, Dutch and Italian, the crowd shrank further when more than half stood up and left for another event: The souvenir shop had opened.

Skiing, skating and the other competitions take place before a global TV audience, but limited crowds see them in person after China, which is enforcing strict anti-virus controls, decided against selling tickets or allowing spectators to come from abroad.

Instead, organizers said they would invite 150,000 people including schoolchildren, diplomats, businesspeople and what the organizing committee called “winter sports enthusiasts.” This was somewhat of a departure from the Tokyo Games last summer, where pandemic protocols kept most venues all but empty.

An Associated Press journalist was among a handful of Beijing-based reporters invited by the Foreign Ministry to watch the curling on Monday.

Organizers have given few details, but foreign chambers of commerce and employees of companies that are Olympic sponsors said they received invitations to the Feb. 4 opening ceremony.

People who attended the ceremony and sports events were required to receive a third dose of an anti-coronavirus vaccine as a booster, present two negative virus tests before events and take two more tests afterward.

Joerg Wuttke, president of the European Union Chamber of Commerce in China, said he was invited but couldn’t attend because it was too early to receive a booster. Wuttke said he would watch on TV.

Spectators are issued N95 masks and arrive at venues aboard buses as volunteers in blue parkas and white hats wave.

Guards check foreign passports or Chinese identity cards. Spectators are required to show a smartphone app that tracks their movements and health condition. They pass through metal detectors and are scanned for the coronavirus's telltale fever.

Cameras, computers, pens, selfie sticks or food and drink from outside are forbidden.

Inside sports venues, spectators are kept in areas separate from athletes, reporters and sports officials. They are as little as six meters (20 feet) away but are in areas dubbed “the bubble" that are supposed to have no contact with outsiders.

During the curling competition, spectators were separated by empty seats. In an anti-coronavirus measure, signs in competition venues tell spectators in Chinese and English, “NO CHEERING.”

At the souvenir shop, plush toys of Olympics mascot Bing Dwen Dwen and children's clothes were sold out, but paperweights shaped like curling stones, binoculars and Olympics-themed clothing, jewelry and pins were available.

In an email response to questions, the Beijing organizing committee said spectators would be organized by their communities, employers and winter sports associations.

Gao Jia, an employee of a sponsor, received a ticket to the opening ceremony. She said attendees gathered at a hotel for a security check, were taken to the Olympic Park on Beijing’s north side and walked three kilometers (two miles) to the National Stadium.

“We were quite tired, but the excitement offset all of it,” she said. “When we got inside, everything had turned blue. We felt, wow, it was all worth it.”

Gao said afterward she was required to stay home for one week. She asked that her company not be identified by name.

Employees at other companies that are Olympics sponsors including Bank of China Ltd. and social media platform Sina Weibo have said they were offered tickets.

One woman wrote on Sina Weibo that her company received three tickets and more than 70 employees applied for them. The posting didn’t identify the company and the user didn’t respond to a message from AP.

At the end of Monday’s curling, Britain, Canada, Denmark and Sweden scored more than Italy, Norway Russia and Switzerland in the day’s round robin.

The teams quietly left the ice to a smattering of applause in the nearly empty arena.