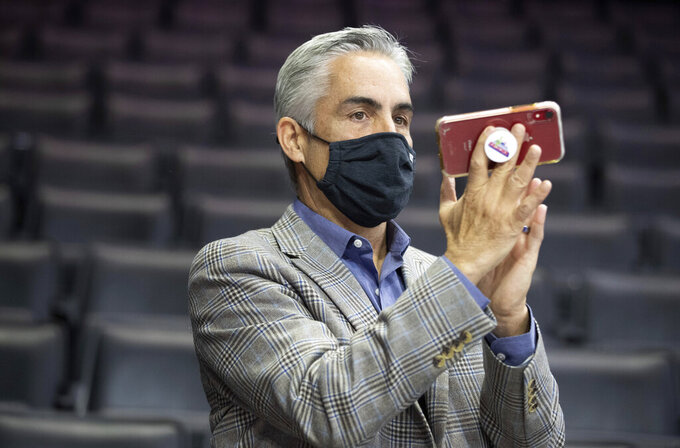 FILE - USA Curling CEO Jeff Plush applauds a presentation by a member of the U.S. Wheelchair Curling Team prior to evening competition at the U.S. Olympic Curling Team Trials at Baxter Arena in Omaha, Neb., Nov. 18, 2021. A majority of USA Curling's diversity task force has called for the removal of Plush as the national governing body’s CEO, accusing him of failing to act when confronted with allegations of sexual abuse and other misconduct while serving as the commissioner of the National Women’s Soccer League. (AP Photo/Rebecca S. Gratz, File)

The head of the organization that runs Olympic curling in the United States resigned Friday in the wake of an investigation that revealed he failed to act on allegations of sexual abuse and other harassment when he was commissioner of a women’s soccer league.

USA Curling said it had accepted the resignation of CEO Jeff Plush and appointed Dean Gemmell, the federation's director of development, as interim CEO.

USA Curling also said it was launching a full review of its bylaws and governance policies, including how it manages abuse claims.

“Change will come swiftly, with contributions from all kinds of people who play our great sport,” the federation said in a statement.

Gemmell said he was planning on hosting a town hall in the coming week.

“I’m convinced curling can be a force for good, and when the people in this sport work together we can make great things happen," he said in a statement.

Plush did not immediately respond to a text message and email from The Associated Press.

Last week, citing the soccer investigation, a majority of USA Curling’s diversity task force called for his removal and, failing that, for the board to step down.

“He cannot be trusted to prioritize the safety and well-being of athletes in this organization,” the group said in a statement that was signed by 11 current and former members of the Diversity, Equity and Inclusion Task Force. “We are concerned about the immediate safety of US curlers.”

Plush’s tenure was also in turmoil after the governing body voted at a member’s assembly earlier this week to expel the country’s largest regional association for nonpayment of dues during the pandemic. Clubs complained that debate was shut down without having a chance to voice their opposition and about other irregularities in the voting process.

Unhappy curling clubs took to Twitter with calls to #FlushPlush, saying the purge clashed with the sport’s ethos as a welcoming, convivial community and its desire to grow beyond its upper midwestern roots.

According to an investigation by former U.S. Attorney General Sally Yates, Plush was aware of abuse allegations against Portland Thorns coach Paul Riley when he led the National Women's Soccer League but did not do anything to prevent him from coaching in the league. The report also said Plush did not respond to requests for an interview as part of the investigation, which uncovered years of systemic emotional abuse and sexual misconduct.

USA Curling has said an investigation found Plush “acted in accordance with prioritizing the safety of athletes.” It said it would revisit the investigation in light of the Yates report.

The diversity task force called upon U.S. Olympic and Paralympic Committee CEO Sarah Hirshland to remove Plush from the position he has held since 2020. It also requested an investigation into how USA Curling has handled any abuse allegations during Plush’s tenure.

The statement was signed by eight members of the 12-person task force and three former members; the four who did not sign were Plush and members of the USA Curling staff and board of directors.

The statement also was posted online as a petition, and it had garnered more than 500 signatures.

“The collective response has eroded the trust of the curling community in the institutions charged to protect us,” the statement said.

According to the report into sexual misconduct in soccer, Thorns player Mana Shim informed Plush in 2015 about Riley’s advances, as well as his retaliation when she asked him to stop. Plush forwarded Shim’s email to U.S. Soccer, but the league took no action against Riley.

Riley, who denied the allegations, was fired as coach of the North Carolina Courage. NWSL Commissioner Lisa Baird stepped down, and Thorns and Portland Timbers owner Merritt Paulson stepped down as the teams’ CEO.