Czechs rely on equipment manager in net for Olympic practice 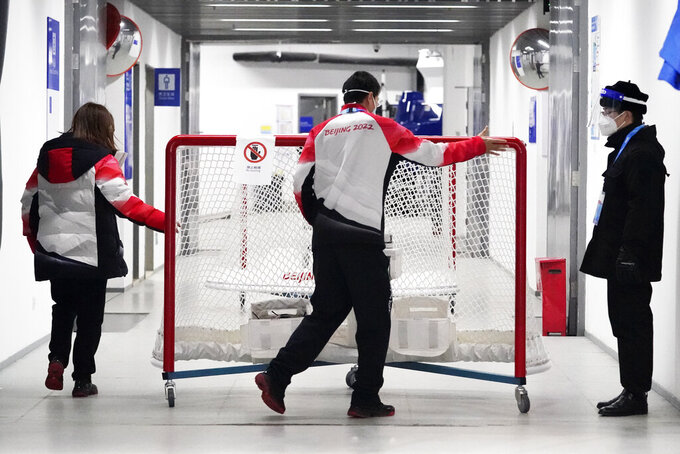 A hockey net is moved down a hallway as the National Indoor Stadium is prepared for ice hockey at the 2022 Winter Olympics, Monday, Jan. 31, 2022, in Beijing. (AP Photo/Mark Humphrey)

Now an equipment manager for the Czech national team, he was the only goaltender on the ice for pre-Olympic practice Tuesday because more than half the roster hasn't made it to Beijing yet. Much like Jaromir Jagr, he won't be added to the roster, but players and coaches are happy to have Sulan around.

“I don’t know if it’s possible just to ask him to do the drinking water for the guys and then jump to the net,” Czech Republic coach Filip Pesan said. “I don’t think it’s going to happen.”

The Czechs are wondering what their situation in net will look like, since goalies Patrik Bartosak, Simon Hrubec and Roman Will have run into COVID-19 testing issues back home.

“Those guys, they were positive, they had COVID two, three weeks ago, so we were sure that those guys are ready for the tournament,” Pesan said. “We’re still kind of sure that they’re ready and we’re going to pray for them to come.”

The Czechs practiced with only 10 skaters and Sulan, which is actually their biggest group since getting to China. That's because of a combination of positive virus test results and the Czech league continuing to play games this week.

“We finally could play 5-on-5 in the zone,” Pesan said. “It’s the first time in the last three weeks we have that chance.”

Players had someone to shoot on because of Pesan, who at 39 can still fill in more than a decade since hanging up his pads. Pesan hoped to have one of the team's goalies on the ice for practice Wednesday but plans to use Sulan again.

“He’s pretty good,” said forward Lukas Sedlak, who was one of the new additions to practice. “He’s doing a good job. Hopefully I think tomorrow we’re going to have our goalie. I usually score more goals on regular goalie, so I will be happy.”

Pesan will be happy when the goalies on the roster pass their tests and get on the ice in Beijing. Former NHL forwards David Krejci and Michael Frolik should be with the team later this week, too.

One player who won't be joining is Jagr, the face of Czech hockey for the past three decades who's still playing on the verge of his 50th birthday. Jagr is still playing for Kladno, the team he owns in the Czech Republic, but is not eligible to go to Beijing because he wasn't among the pool of players the federation submitted.

“He’s not on our long list, so that’s why we cannot ask him to come over,” Pesan said.

The Czechs open the tournament Feb. 9 against Denmark.