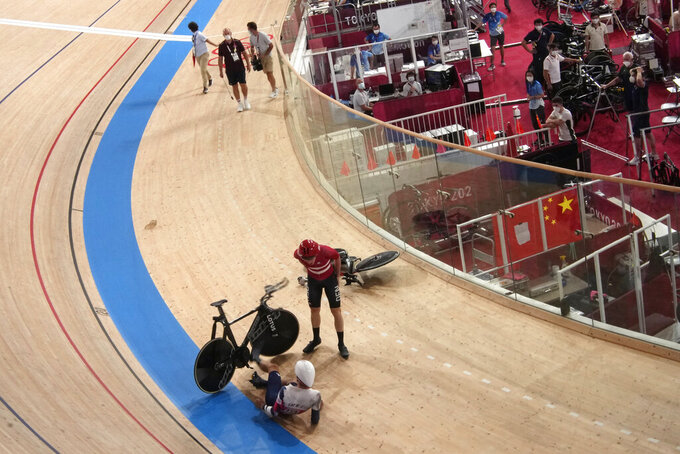 First, the world champions were spotted wearing kinesiology tape on their legs and aerodynamic vests under their jerseys in qualifying on Monday, stretching the rules if not breaking them outright as they set the fastest time.

Then in their heat Tuesday, they were so far ahead of the British squad that their lead rider ran right into the trailing rider of their biggest rival.

Both hit the deck, but cycling officials decided to push Denmark into the finals even though it was clear that the Danish rider had caused the wreck — they will face Italy for the gold medal Wednesday.

Asked whether Denmark should have been disqualified for breaking rules, British coach Iain Dyer replied: “Which one?”

“I'm not alleging fair play by Denmark. I'd like to see the UCI uphold the regulations,” Dyer continued, referring to the sport's global governing body. “I feel fairly let down by the UCI at this point that their application has been so inconsistent.”

There's a lot to unpack there, so let's start with the tape.

While many cycling rules are ambiguous at best, they are clear when it comes to this: “Any non-essential element of which the purpose is not exclusively that of clothing or protection, is forbidden,” the rule states. That includes kinesiology tape, which in theory should disrupt the air flow over the shins and give riders wearing it an aerodynamic advantage.

It might seem miniscule, but that advantage can be the difference in races that come down to fractions of a second.

“We use it for injuries in the knees and lower legs. For that reason we asked (Monday), 6 hours before the race (whether it could be used),” Danish coach Morten Bennekou said. “We got permission and we used it.”

Yet the permission was granted in the case of an injury. It wasn't given for all four riders to wear it in the race.

So the British team lodged a complaint. So did several other nations. And the UCI decided that, rather the penalize the Danish team, they would be given a warning and allowed to compete without the tape going forward.

“We didn't try to cheat," Bennekou insisted. “We asked for permission.”

As for the aerodynamic undervests, the rules state anything used in a team's kit must be available for public sale at the start of the year. But the British team claimed the website selling the garments worn by Denmark was updated just in the last 24 hours to make it appear that the undervests were for sale earlier than they were.

“We don't believe they were commercially available at the beginning of January,” Dyer said.

All of this served as a preamble to Tuesday's race, when Denmark and Britain faced each other for a spot in the finals.

The Danes got off to a torrid start in the 4,000-meter race, where the two teams start on opposite sides of the track and ride at the same time. By the time they reached the midway point, the Danes were catching up to the British team, which had dropped one rider and had become so strung out that it was clear their hopes for a gold medal were gone.

As they hit the front stretch, the lead Danish rider, Frederik Madsen, ran right into the trailing British rider, Charlie Tanfield, sending both clattering onto the wooden surface in the first turn. Madsen got up and stood over Tanfield, yelling angrily at the young British rider, then stalked out of the velodrome thinking his Olympics were over.

“There's just so many emotions,” Madsen said. “I'm not saying anything to Charlie. I'm shouting because I'm frustrated.”

The Danes blamed track officials for not alerting their rider that they were approaching lapped traffic. The Brits blamed the Danes for riding with their eyes on the track, rather than watching to see where they were going.

“Our understanding was the Danes caused the crash of their opponent,” said Dyer, pointing out precedent from a recent race in Russia. “It prevented us from setting a time and progressing to the next round yet to come.”

It wasn't until about an hour later that officials announced Denmark would be advancing to Wednesday's finals.

“There's no question as a team GB underperformed,” said Dyer, whose team had won three straight gold medals going back to the 2008 Games in Beijing. “It's not sour grapes but you just like to think you're on a level playing field.”