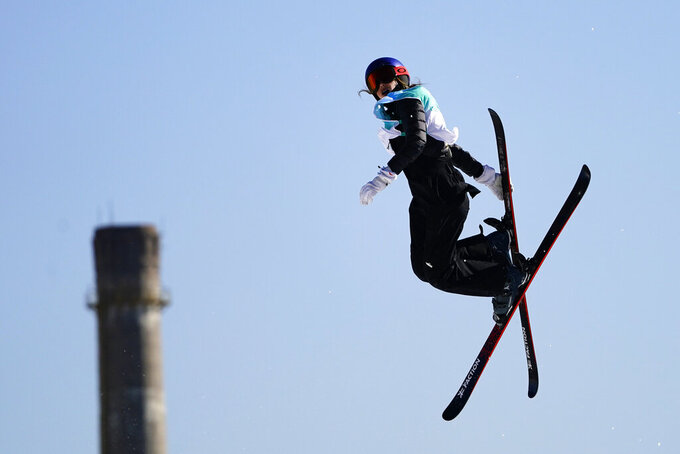 BEIJING (AP) — She is an exceptional athlete who has already won medals in the Beijing Olympics. But the deep fascination with Eileen Gu's origin story has threatened to overshadow anything she does on the slopes.

For her part, the 18-year-old athlete has said she wants to inspire girls in China, where there are few female role models in sports.

The frenzy to “explain” Gu’s choice reflects biases and misunderstandings in the United States about Asian American identity.

She has genuinely strong connections to China, like many others in the Chinese diaspora who are taking advantage of opportunities and resources both in the Western countries where they grew up and in an increasingly wealthy mainland China.

Gu had an upper middle-class upbringing and private school education in the United States, and she says she’s equally comfortable in both countries. “When I’m in China, I’m Chinese," she told the Olympic Channel in 2020. "When I’m in the U.S., I’m American.”

“It’s sort of ironic because in half our cases, people use anti-Chinese rhetoric and are telling us to go back home. They’re telling us, ‘You don’t belong here. We don’t accept you.’ And then this is sort of the opposite: ‘Why aren’t you representing your home?’" says Russell Jeung, an Asian American Studies professor at San Francisco State University. “And so we lose either way."

It turns out that, in a world where elite athletes increasingly cross borders to compete, Gu is not that unusual. No one thinks twice about a Senegalese winger in the English Premier League or a Japanese pitcher in Major League Baseball.

"We’ll see if her stance ... will be fully accepted there over the long run,” says Rui Ma, founder of the San Francisco-based investment consulting firm Tech Buzz, who immigrated from China to the U.S. as a child in 1989. “It certainly doesn’t seem to be accepted by many Americans at the moment.”

Gu also represents how dramatically migration from China to America has changed. While many continue to move to the U.S. for low-wage jobs, they’re increasingly being outpaced by migrants with flexibility and the money to spend summers in China and maintain regular contact with family at home. They are more likely to be bicultural, openly embracing their heritage unlike earlier generations who were told — and believed — that integration was their ticket to acceptance.