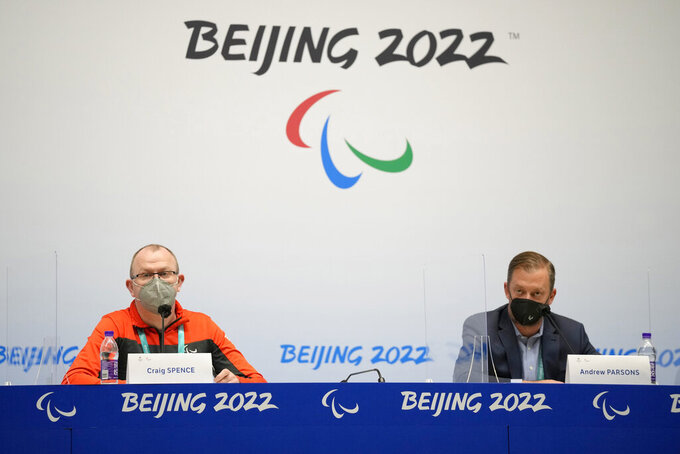 International Paralympic Committee President Andrew Parsons, right, and spokesman Craig Spence listen to a question from a member of the media during a press conference at the 2022 Winter Paralympics, Thursday, March 3, 2022, in Beijing. In a stunning reversal, Russian and Belarusian athletes have been banned from the Winter Paralympic Games for their countries' roles in the war in Ukraine, the International Paralympic Committee said Thursday in Beijing. (AP Photo/Dita Alangkara)

BEIJING (AP) — The Paralympic U-turn on Russian participation in the upcoming Beijing Games isn't likely to be the end of the story.

The Winter Paralympics are scheduled to open on Friday without Russian and Belarusian athletes. The competitors from those countries were expelled from the event on Thursday because of their governments' role in the invasion of Ukraine.

The decision to bar them came a day after the International Paralympic Committee had originally decided to allow them to compete as “neutral athletes” with no colors, flags or anthems.

The sudden reversal followed an uproar in Beijing, where athletes and teams from other countries threatened to pull out if Russians and Belarusians competed.

The Russians and Belarusians can appeal against their expulsion, either to the Court of Arbitration for Sport in Switzerland or to a court in Germany, where the IPC is based.

CAS said Thursday it had not received any appeal. Although it is obliged to handle doping cases from the Paralympics, CAS doesn't need to be involved in other IPC business.

An urgent legal process on the eve of the Paralympics could be a rerun of the Russian team’s efforts to get back into the 2016 Rio de Janeiro Paralympics.

Then, the IPC imposed a blanket ban on the Russian team in fallout from the state-backed doping program that saw many of the country’s athletes excluded at short notice from the Summer Olympics only weeks earlier.

In a flurry of legal hearings, the Russian Paralympic Committee failed to get the rulings it sought at the Court of Arbitration for Sport, the Swiss supreme court and the IPC’s local court in Bonn, Germany. All the courts thought a Russian blanket ban was proportionate.

The Bonn court suggested the “special nature” of the Olympics and Paralympics, where athletes compete representing their nation rather than as individuals, meant they had to “accept restrictions that are not their own fault.”

That judgment could go to the heart of the current case — that Russian and Belarusian Paralympians have been penalized for a war for which they have no responsibility or blame.

More recently, German courts got involved in other IPC business. Before the Beijing Paralympics, local courts in Düsseldorf and Cologne overturned IPC rules and forced them to allow two snowboarders to compete.

If the Russians and Belarusians win an appeal and get reinstated, the Beijing Paralympics could be in jeopardy.

IPC President Andrew Parsons said Thursday the organization underestimated the negative reaction to originally letting Russians and Belarusians compete — even as neutral athletes. The Latvian curling team, for instance, said it would refuse to play against the Russians in a scheduled group game.

More tumult could ensue if they are allowed back in, possibly causing some athletes or teams to follow up on their threats to withdraw.

Although their events coincide, they maintain different rules and different leadership. However, Parsons is an IOC member and was invited to take part in its executive board meeting on Monday. That led to the IOC urging sports bodies around the world to ban Russians and Belarusians from competitions or let them compete as neutral athletes in special circumstances, like short notice.

The first official Paralympics were held in 1960 in Rome, but under a different name at the time. Other events for disabled athletes preceded that.

The IPC was founded in 1989 and signed an agreement with the IOC in 2001 to ensure the Olympic host city would also stage the ensuing Paralympics.