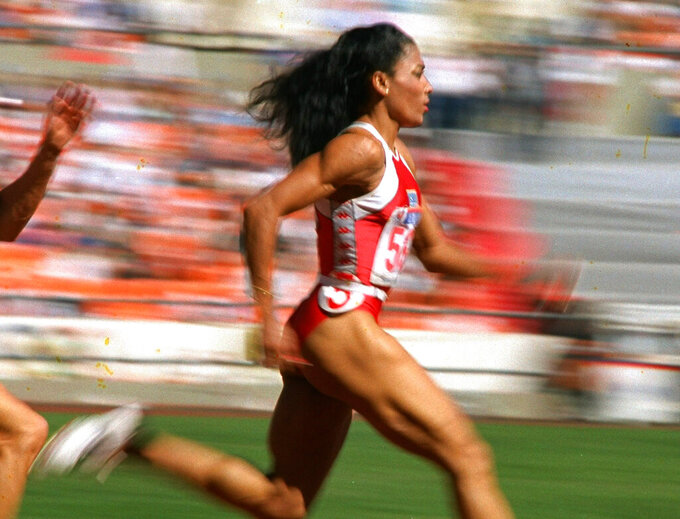 FILE - In this Sept. 29, 1988, file photo, U.S. sprinter Florence Griffith Joyner of Los Angeles strides to a world record in a semifinal heat of the Olympic women's 200-meter dash in Seoul, South Korea. The name Flo-Jo is popping up quite a bit these days with sprinters creeping closer to her record times in the women’s 100 and 200 races. The late Florence Griffith Joyner has held both marks for three decades. (AP Photo/Lennox McLendon, File) 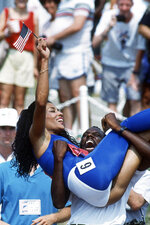 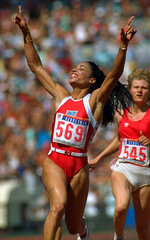 TOKYO (AP) — She had the long and colorful nails. She wore the flashy outfits, including a neon one-legged spandex bodysuit.

Above all, she had the iconic nickname “Flo-Jo," which just sounded fast.

For 33 years, sprinters have been chasing the records cemented next to the name “Florence Griffith Joyner.” The current wave of speedsters — many of whom weren't even born when Flo-Jo commanded the stage — keep creeping closer to the late sprinter's hallowed world-record marks in the 100 (10.49 seconds) and the 200 (21.34).

So much so that Al Joyner, her husband, wouldn't be surprised if the records soon fall — maybe over the next two weeks at the Tokyo Games. And if not here, then perhaps by the next time everyone gathers for the Olympics, in Paris in 2024.

All of which, Joyner firmly believes, wouldn't bother Flo-Jo in the least.

“I remember she once told me, ’I never want anybody to be like me. I want them to make bigger footsteps than me,'” Joyner said in a recent interview with The Associated Press. “That was always her dream.”

Of course, there have been those who question the legitimacy of the records.

The times were mind-boggling when she set them, and the fact nobody has come within .14 seconds of either mark in three decades-plus often leads to not-so-subtle commentary on social media and elsewhere. The 100 record came on a breezy day in Indianapolis, but officials deemed it a legal wind. While Flo-Jo's record has stood, the men's record has been lowered about a dozen times since 1988 to where it stands today — 9.58 by Usain Bolt in 2009.

And, of course, there is the specter of doping during that era in track. With fast times run in the U.S. and Jamaica putting Flo-Jo's old marks back in the limelight this year, the predictable cycle of allegations resurfaced. Family friend and actor Holly Robinson Peete tried to shut it down.

“Her funeral was one of the saddest most crushing days I’ve ever experienced,” Peete posted on her Twitter account. “Sooo — what you are NOT going to do is make up (poop emoji) about her disrespecting her family and her legacy.”

Those assertions and accusations always rankle Al Joyner, who tries to stay above the fray with that part of the legacy. The only individual women's running records that have been on the books longer are the 400 meters (Marita Koch of East Germany, 1985) and the 800 (Jarmila Kratochvilova of Czechoslovakia, 1983) — both during a time when Eastern Bloc countries were committed to widespread doping.

“I try to rise above it and do what (Florence) would do — she always tried to rise above it,” said Joyner, whose sister is heptathlon great Jackie Joyner-Kersee. “She was always classy."

And so, Joyner prefers to remember the good times — and the memorable stories. Such as when he was preparing for the triple jump at the 1988 Olympic trials and paused for a brief moment as his wife lined up for the 100 meters.

Flo-Jo, with her iconic long nails painted bright and wearing a flashy purple one-legged bodysuit, was a blur of neon blazing down the track on that July 16 day. She stunned the crowd and shocked the announcers when her time came up: 10.49.

Al leaped high into the air after seeing his wife make history — a jump for joy he wasn't able to replicate in the triple jump. He wouldn't qualify for the U.S. team and wouldn't defend his Olympic title.

“I got caught up in the moment,” Joyner said.

What he witnessed, though, was a performance many believed would never be duplicated. Griffith Joyner captured five Olympic medals, including three gold. In 1998, at the age of 38, Griffith Joyner died in her sleep as the result of an epileptic seizure.

“Once you met her, you fell in love with her,” said Joyner, who has a daughter, Mary, with Flo-Jo. “They (sprinters of today) know her by name. But they don’t know the impact she really had.”

She did it her way, too, with style. In an interview soon after breaking the 100 mark, she said: “Conventional is not for me. I like things that are uniquely Flo. I like being different. The outfits they give us are so standard.”

Today's sprinters are quickly getting up to speed on her legacy and even emulating that unique style — right down to her long nails. American sprinter Sha'Carri Richardson has a similar burst from the blocks as Flo-Jo. Same sense of fashion, too. Richardson wore her hair in a vibrant orange — to represent flames — at the trials. But she won't be at the Tokyo Games because of a marijuana suspension soon after winning the trials.

Someday, some people think, Richardson might be the one to eclipse the mark.

In Tokyo, it could be Shelly-Ann Fraser-Pryce of Jamaica. The sprinter known as the “Mommy Rocket" became the second-fastest woman in history when she recorded a 10.63 in June. Her teammate, Elaine Thompson-Herah, went 10.71 in July, with Richardson turning in a 10.72 in April.

“When I see Richardson and Elaine Thompson, they remind me of my late wife,” Al Joyner said. “They’re going to get close to (the record) because they’re seeing it is attainable.”

The 200 record could be in jeopardy as well.

At the Olympic trials in June, Gabby Thomas, the epidemiologist/sprinter from Harvard, finished in 21.61, becoming the second-fastest woman in the history of the event. Al Joyner happened to be in the stands watching Thomas race.

“She’s preparing to go fast and that’s the mindset you have to have,” said Joyner, who's remarried and serves as a coach.

Can Thomas one day break that world mark?

“I don’t want to put a limit on myself,” she said. "I’m not going to say it’s unattainable.”

Joyner vividly remembers the first time he met Florence — the 1980 Olympic trials, just walking through a corridor. He instantly knew. But it wasn’t a fast courtship. It took about six years for them to go out on a first date. They were married in 1987.

Not long after that, Al Joyner went from a track star in his own right to the biggest supporter on Team Flo-Jo. The turning point came when they lined up against each other to race.

"I ran right off the track and into coaching,” he said with a laugh. “She wasn’t happy with beating me — she wanted to see how far she could leave me behind.”