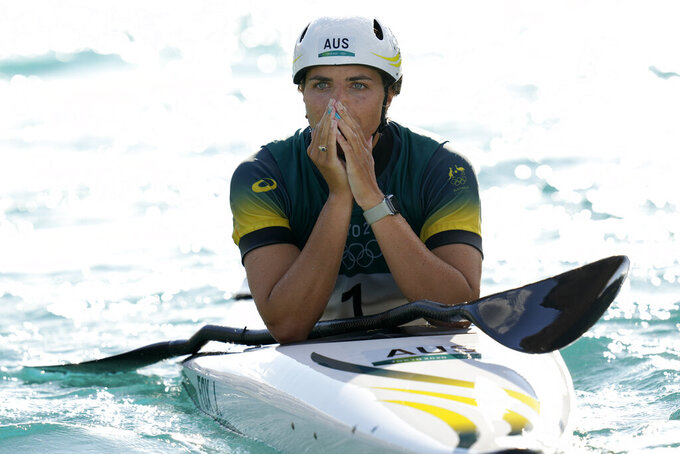 Jessica Fox of Australia reacts after crossing the finish line to win bronze in the Women's K1 of the Canoe Slalom at the 2020 Summer Olympics, Tuesday, July 27, 2021, in Tokyo, Japan. (AP Photo/Kirsty Wigglesworth)

TOKYO (AP) — With a scream and a finish-line fist pump, Germany's Ricarda Funk knew she had posted a medal-worthy time after she battled the rushing waters at the Kasai Canoe Slalom Center.

That it was gold medal good in her first Olympics was the surprise result still to come.

Waiting back up at the start of the women's kayak slalom was Australia's Jessica Fox, the world's No. 1-ranked paddler and the heavy favorite to win a pair of gold medals in Tokyo.

“I wasn't thinking anything. I was already over the moon that I had won a medal," Funk said. “I don’t know how to celebrate an Olympic medal. It is my first time.”

But Fox's mistakes early and late in the final run of the day left Funk the surprise winner as the Australian dropped to third and clutched her face in her hands in disbelief.

Funk's clean run of 105.50 seconds had snatched the lead from Spain's defending gold medal champion Maialen Chourraut. Fox then waited for Slovakia's Eliska Mintalova to finish her run while eyeing Funk's time to beat. It was good, but certainly beatable.

Yet Fox, who has dominated women's slalom in the run-up to the Olympics, struggled from the start. She touched gate No. 4 for an early 2-second time penalty. She shrugged that off well enough that her time splits were still well ahead of Funk late in the course.

Fox's critical mistake came late when she touched the second-to-last gate. She clutched her hands in her face after crossing the finish line, knowing she had lost the gold medal. With the four seconds in penalties, Fox had finished 1.23 seconds off the lead.

“Hitting gate four wasn’t the perfect start, but I wasn't too fazed by that,” Fox said. “With that last penalty down at the bottom, it was one too many.”

Fox has now won consecutive bronze medals to go with a silver she won in 2012.

“I wasn't sure if I was third or fourth,” Fox said. “Now to have this bronze medal, a third Olympic medal, is a great feeling."