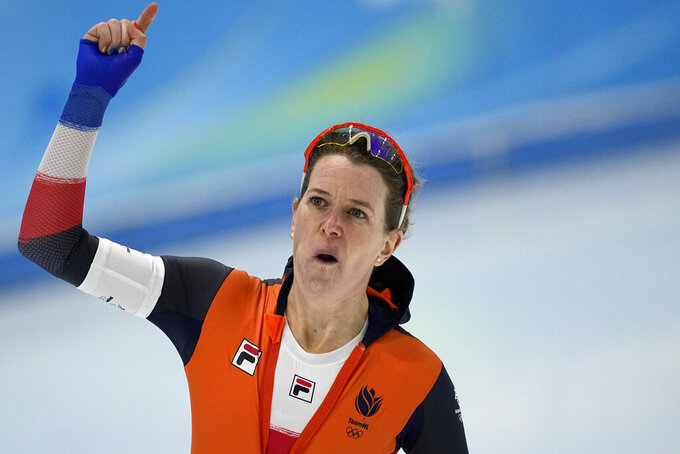 Ireen Wust of the Netherlands reacts after winning her heat and breaking an Olympic record in the women's speedskating 1,500-meter race at the 2022 Winter Olympics, Monday, Feb. 7, 2022, in Beijing. Her time stood for the gold medal. (AP Photo/Ashley Landis)

The 35-year-old Wüst already was the most decorated speedskater in Winter Olympic history when she added to her haul with a victory in the 1,500 meters.

That gave the Dutch star a dozen medals overall, a collection she started gathering in her debut at the 2006 Turin Games.

But what made this one really stand out was the color.

She's got six of them now — five in individual events that are evenly distributed over each of the Olympics she has competed in during her remarkable career.

On the biggest stage, Wüst always seems to shine.

“I don't know what it is," she said. “I just see the rings and something magical happens.”

Wüst had been part of an elite group of winter and summer athletes to win individual golds at four Olympics, joined by icons such as Michael Phelps, Carl Lewis and Al Oerter. British rower Steve Redgrave won gold medals over five Olympics, but each of those victories came as part of two- or four-man teams.

Wüst did it all on her own.

The enormity of her accomplishment has yet to sink in.

“Of course it means a lot, but I don't realize it yet," said Wüst, who plans to retire after the Olympics. “Ask me this question again in 10 days. I'm an emotional mess in my head."

Wüst defended her title in the 1,500, setting an Olympic record with a time of 1 minute, 53.28 seconds at the Ice Ribbon oval.

Miho Takagi of Japan claimed the silver in 1:53.72, while the bronze went to Antoinette de Jong of the Netherlands in 1:54.82.

Wüst ripped off her hood, threw up her arms and tilted back her head in delight when she saw her time on the scoreboard.

“She had the perfect race at the best moment,” de Jong said.

The mighty Dutch team won its second gold in three speedskating events, setting itself up for another big performance after dominating the last two Winter Games at the oval.

“An Olympic record on this track is amazing,” Wüst said. “I was really fast. I was really proud of myself that I gave my best 1,500 in the biggest moment.”

It was another Olympic disappointment for Brittany Bowe. The 33-year-old American again came up short in the quest for her first individual medal, fading badly at the end to finish 10th in 1:55.81.

Wüst just keeps getting stronger. Amazingly, she has medaled in the 1,500 — a race that requires the speed of a sprinter and the staying power of an endurance skater — at all five of her Olympics.

She’s won the gold three times, to go along with a silver and a bronze. Her other individual golds are in the 3,000 at the Turin and Sochi Games.

“Words can't describe her class,” Bowe said. “She is the greatest of all time, as her performance shows. Another Olympic gold medal in Olympic record fashion. I’m honored to have competed against her for so many years, and even more so to call her a friend.”

Wüst broke the previous Olympic mark of 1:53.51 set by Jorien ter Mors of the Netherlands at the 2014 Sochi Games.

Bowe, a former college basketball player and inline champion who is one of three American skaters from Ocala, Florida, has long been a stalwart of the U.S. program.

But the last two Olympics have been a disappointment for the four-time world champion, whose only medal came four years ago when she was part of the bronze-winning squad in the team pursuit.

The 2018 Games were especially painful for Bowe, who had a fourth and two fifths in her individual events, missing out on three medals by a total of less than a second.

After carrying the American flag in the opening ceremony, she wasn't even close in her first event at the Beijing Games. Bowe finished 2 1/2 seconds behind the winner and nearly a second off the podium.

“Coming from the sprint side of things, I have to get it going,” she said. “I have to try to use my speed to my advantage. I just didn’t have the legs there at the end.”

Bowe still has two more individual events to redeem herself. She also qualified in the 500 and 1,000.

“I gave it everything I had and I’m excited for the next opportunity,” she said. "I’m really excited for the 1,000. I’ll definitely be going for the gold there at the end of the competition.”

Winning another gold will not dissuade Wüst from her plans to retire after the Beijing Games.