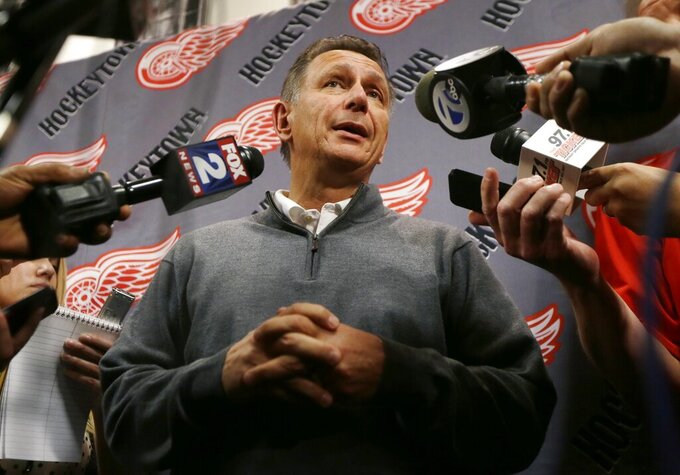 FILE - In this Wednesday, May 20, 2015, file photo, Detroit Red Wings general manager Ken Holland addresses the media, in Detroit, to discuss the head coaching vacancy as coach Mike Babcock will now be the new head hockey coach with the Toronto Maple Leafs. Holland has been elected to the Hockey Hall of Fame's class of 2020. (AP Photo/Carlos Osorio, File)

Like most kids growing up in Edmonton, Jarome Iginla admired Oilers legends Wayne Gretzky and Mark Messier. As a young Black hockey player, he paid particular attention when he saw someone in the NHL who looked like him in Grant Fuhr.

Iginla idolized Fuhr, cherishing their pictures taken together over the years, and soon will join him in the Hockey Hall of Fame. The longtime Calgary Flames captain headlined the hall's six-person 2020 class Wednesday, making it in his first year of eligibility.

Iginla will be the fourth Black player inducted after Fuhr, women’s hockey pioneer Angela James and Willie O’Ree. Iginla and Fuhr are the only Black NHL players enshrined for their on-ice accomplishments, while O’Ree was chosen in the builder category in 2018 for breaking the league’s color barrier 60 years earlier.

“I didn’t view myself in minor hockey as a Black hockey player but I was also aware that I was,” Iginla said. "It really was special to me to see the Black players that were in the NHL — to see Grant Fuhr starring, to be able to say to other people: ‘Look at Grant Fuhr. He’s an All-Star.’ And to see Claude Vilgrain and Tony McKegney and to have answers for the other kids. It was very, very important for me following my dreams."

Iginla was the first Black player to lead the NHL in goals and points and was the first Black male athlete in any sport to win a gold medal in the Winter Olympics. A first-generation Canadian whose father is Nigerian and mother is American, Iginla owns one of the biggest assists in Canada's history of international hockey. He passed the puck to Sidney Crosby for the “golden goal” at the 2010 Olympics in Vancouver.

“The pressure in those games, in the do-or-die games especially, it’s pretty awesome," Iginla said. “You’re playing for your teammates. It’s for your country. You feel like so many people are watching. You’re trying to carry on the tradition."

In addition to two Olympic gold medals in three appearances, Iginla won the Maurice “Rocket" Richard Trophy twice as the NHL's top goal-scorer and in 2002 won the Art Ross Trophy for the most points and Ted Lindsay Award as MVP voted by fellow players. He also won the Canadian junior Memorial Cup twice and world juniors, world championship and World Cup of Hockey once each.

A power forward on the wing with a prolific scoring touch, Iginla had 625 goals and 675 assists for 1,300 points in 1,554 regular-season NHL games for the Flames, Avalanche, Penguins, Bruins and Kings. He had 68 points in 81 playoff games and most notably led Calgary to Game 7 of the Stanley Cup Final in 2004.

Hossa was also elected in his first year of eligibility and joins 2015 inductee Chris Pronger as the only players to go into the hall while still under contract. Like Pronger, Hossa qualified because he hasn't played in three years; he retired in 2018 because of a skin disorder.

“Going through the failures make you stronger,” said Hossa, who joins Slovak countrymen Stan Mikita and Peter Stastny as Hall of Famers. “Maybe for me, the third time’s the charm. Not just in the final winning the Stanley Cup but also being the third Slovak.”

Lowe and Wilson had to wait more than 20 years to be inducted. Wilson, who won the Norris Trophy as the league’s top defenseman in 1982 and retired in 1993 said: “Timing never meant a thing to me. That’s an understatement: Worth the wait.”

Lowe won the Cup six times — five with the Oilers and once with the New York Rangers in 1994. Hall chairman Lanny McDonald joked to Lowe, “You only won six Stanley Cups, you selfish rascal you.”

“It was always my dream to win a Stanley Cup,” said Lowe, the eighth member of Edmonton’s dynasty to reach the hall. “I never dreamt of the Hall of Fame. I guess I should’ve expanded my dreams.”

Holland is trying to bring the Cup back to Edmonton as GM of the Oilers, so his building work isn't done. He qualified for the hall with his four championship: three as Detroit's GM and one as an assistant.

“I'm really cherishing this opportunity,” Holland said. “There’s a few things that you’d like to accomplish in the game, and today was one of those."

St. Pierre will be the eighth woman in the hall and the first goaltender. After wanting to be like Montreal Canadiens Hall of Fame goaltender Patrick Roy, she traded in her figure skates for goalie equipment and backstopped Canada to three Olympic gold medals and five world championship titles.

“Being the only girl, it was never easy,” said St. Pierre, who played in boys leagues until she was 18. “I had to really fight every day not to become the best but just to play amongst all the boys. But I think it made me the person I am today to never give up and just to always be ready every time I had a chance to step on the ice.”

The 18-member selection committee voted remotely for the first time because of travel difficulties posed by the coronavirus pandemic. It's unclear if the hall will hold its traditional in-person induction ceremony in November. It's tentatively scheduled for Nov. 16.

“I look forward to whenever that is,” Iginla said. "It’s a huge thrill.”