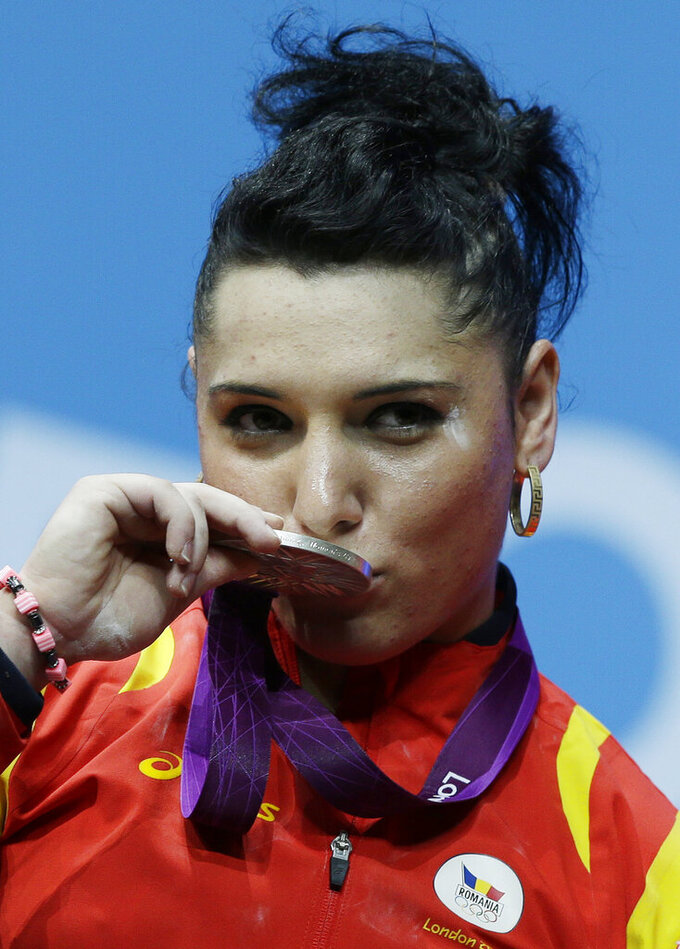 FILE - In this file photo dated Wednesday, Aug. 1, 2012, Silver medalist Roxana Cocos of Romania kisses her medal during a medals ceremony after the women's 69-kg, weightlifting competition at the 2012 Summer Olympics, in London. A culture of alleged corruption among international weightlifting officials has been detailed in a 50-page investigative report released Thursday June 24, 2021, of covered-up doping cases, with Cocos stripped of her medal years later when re-tests revealed her steroid use. (AP Photo/Hassan Ammar, FILE)

GENEVA (AP) — A culture of alleged corruption among international weightlifting officials was detailed Thursday in an investigative report of covered-up doping cases for athletes who won Olympic and world championship medals.

Alleged misconduct for a decade up to 2019, including 146 unresolved doping cases, was laid out in a 50-page document. The investigation was run by the International Testing Agency, which manages anti-doping programs for Olympic sports.

Reasons for the failures to prosecute some doping cases ranged from “chaotic organizational processes” and errors to “outright negligence, complicity, or — at worst — blatant and intentional cover-ups,” ITA investigators wrote. A total of 29 cases cannot be prosecuted due to destroyed evidence or expiring statute of limitations.

Aján and Vlad were implicated in allowing a woman from Vlad’s home country, Romania, whom they knew was implicated in doping offenses, to compete and win a silver medal at the 2012 London Olympics. The lifter, Roxana Cocoș, was stripped of her medal years later when retests revealed her steroid use.

The ITA has proposed lifetime bans for Aján and Vlad, while Akkus has been offered a four-year ban. If they don't accept the bans, the ITA will prosecute the charges at the Court of Arbitration for Sport’s anti-doping tribunal.

Vlad was a gold medalist at the 1984 Los Angeles Olympics and longtime ally of Aján at the IWF.

Aján was ousted after 20 years as IWF president in the fallout of the allegations first aired by German broadcaster ARD in January 2020.

The ITA report gave “significant credit” to the German program for its “robust investigative journalism.”

The documentary “The Lord of the Lifters” alleged financial and anti-doping misconduct and led to an initial IWF-appointed investigation last year by Richard McLaren, the Canadian law professor who uncovered much of the Russian state doping scandal.

Now 82, Aján also resigned his honorary membership of the International Olympic Committee last year. He had been a full member for 10 years until 2010 and took part in choosing Olympic host cities, including Beijing, Sochi and Rio de Janeiro.

Weightlifting’s place at the 2024 Paris Olympics is at risk with the IOC warning it wants to see reforms and the sport cleaned up.

IWF interim president Michael Irani said in a statement that the investigation showed “just how dark the dark days of our sport were.”

“To all those athletes who were cheated of the opportunity to compete fairly, I would like to offer the IWF’s unreserved apology,” said Irani, who previously served on Aján's executive board.

Under Aján, the IWF decided it “could simply ignore WADA’s repeated requests to be provided with doping sanction information in a timely and accurate manner.”

WADA said Thursday it had in the past “limited powers to act against international federations that engaged in the sort of behavior that is alleged.”