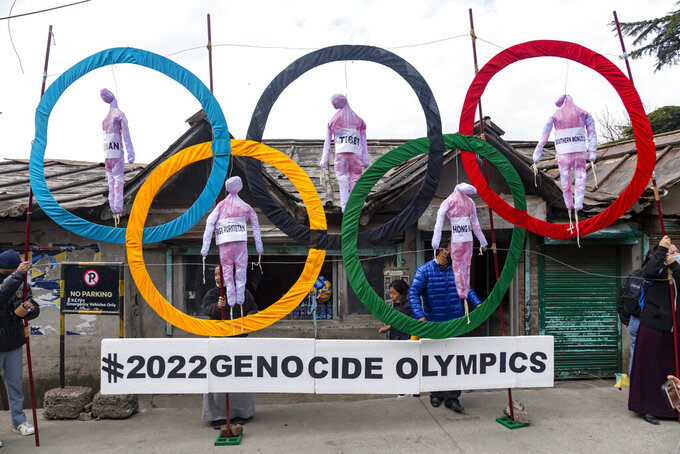 FILE - In this Feb. 3, 2021, file photo, exile Tibetans use the Olympic rings as a prop as they hold a protest against the holding of the 2022 Beijing Winter Olympics, in Dharmsala, India. Facing the boycott-threatened Beijing Winter Olympics in just over six months, the International Olympic Committee said on Wednesday, July 28, that its only responsibility was to “deliver the Games" and not to monitor human rights. (AP Photo/Ashwini Bhatia, File)

TOKYO (AP) — Faced with criticism over human rights issues tied to next year's Beijing Winter Olympics, the IOC said Wednesday that its only responsibility was to “deliver the Games."

International Olympic Committee spokesman Mark Adams was asked at the Tokyo Games about the moral responsibility in seeing to it that athletes and sponsors did not become complicit in supporting alleged human rights abuses in China.

“Our responsibility is to deliver the Games, which are an amazing thing for the world,” Adams said. “That is our responsibility. It is the responsibility of others — the United Nations, who have been very supportive of the Olympic Games, and governments to deal with this — and not for us.

“Given the diverse participation in the Olympic Games, the IOC has to remain neutral. That’s clear,” Adams added.

Four of the five executives in the hearing failed to directly answer a question from Republican Sen. Tom Cotton, who asked if China was “committing genocide against the Uyghur people.”

A U.S. State Department report has drawn this conclusion under both the Trump and Biden Administrations.

Cotton thanked him for a “straight answer.”

Other executives begged off the question, saying they needed to follow Chinese law, or that they had no role in the IOC's choice of Beijing, or these were decisions for governments.

“We do not have a say in the selection of the host city, nor on whether an Olympics is postponed or relocated,” said Paul Lalli, Coca-Cola’s global vice president for human rights. “We do not make decisions on these host locations. We support and follow the athletes wherever they compete.”

China's foreign ministry, responding to comments in the hearing, called the “genocide” in Xinjiang “the lie of the century" put together by “anti-China forces.” It has repeated similar statements previously when boycotts have been threatened.

“This is a serious violation of the spirit of the Olympic Charter and is detrimental to the interests of athletes from all countries and the international Olympic cause. China firmly rejects it," the statement said.

The TOP 15 sponsors paid the the IOC about $1 billion in income in the last four-year Olympic cycle (2013-2016). The IOC says it expects that figure to triple for the next full cycle (2017-2020), which will be completed when the the postponed Tokyo Olympics end on Aug. 8.

Sponsors are responsible for about 18% of the IOC's total income.

Activists groups supporting Uyghurs, Tibetans and other minorities in China are lobbying for an Olympic boycott and pressuring sponsors and American network NBC in the runup to the opening of the Beijing Olympics on Feb. 4.

The IOC derives 73% of its income from selling broadcast rights. NBC alone is the source of about 40% of all IOC income.

Cotton wrapped up his questioning with a scathing comment calling the hearing “pathetic and disgraceful."

Democratic Rep. Tom Malinowski was even more forceful in criticizing Lalli of Coca-Cola. Malinowski said Coca-Cola would not speak up on human rights abuses in China because “that would undermine your ability to make a profit in that country.”

“You are afraid of them (Chinese government) in a way that you are not afraid of critics in the United States," Malinowski said. "And I think that's shameful.”