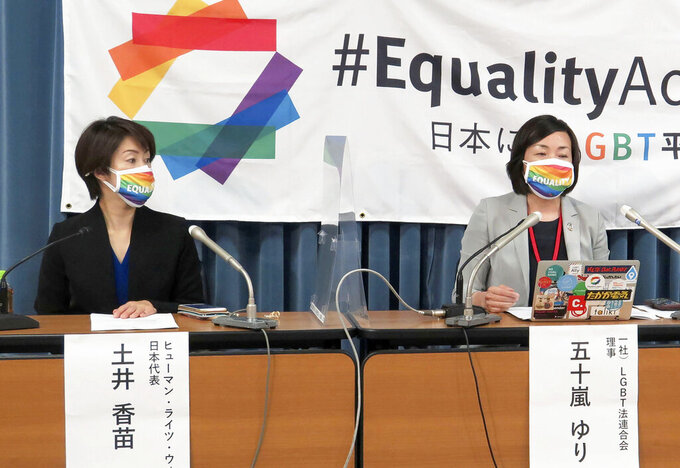 Yuri Igarashi, right, a co-chair of the Japan Alliance for LGBT Legislation speaks at a press conference in Tokyo Friday, June 4, 2021. Sexual minority groups and supporters, in their last ditch effort to get their long sought equality law before the Olympics, petitioned at offices of the ruling Liberal Democratic Party whose conservative members are resisting and stalling the legislation. (Kyodo News via AP)

TOKYO (AP) — Japanese sexual minority groups and their supporters, in a last-ditch effort to get long-sought equality legislation passed before the Tokyo Olympics, submitted requests on Friday to the governing Liberal Democratic Party, whose conservative members have stalled the bill.

The groups also have widened their campaign to gain corporate support for their cause in hopes of pressuring Prime Minister Yoshihide Suga’s pro-business party to support the legislation.

“In order to protect the lives and livelihood of sexual minorities, enacting a LGBT law that states discrimination is not tolerated is an indispensable first step,” said Kane Doi, Japan director for the New York-based group Human Rights Watch.

“An enactment of such a law in Japan ahead of the Olympics is also necessary for the international community,” Doi said, adding that Japan needs to demonstrate its commitment to ensuring equality for LGBTQ athletes, journalists and other participants in the Olympics, set to begin July 23.

Support and awareness of sexual diversity has slowly grown in Japan, but there is still a lack of legal protections for lesbian, gay, bisexual and transgender people. Japan does not legally recognize same-sex partnerships, and LGBTQ people often suffer discrimination at school, work and even at home, causing many to hide their sexual identities.

“Japan is far behind the international standard,” said Yuri Igarashi, co-chair of the Japan Alliance for LGBT Legislation. She noted growing support from the business community, including Panasonic, which on Friday became the 23rd company pledging support for the cause.

Rights groups are pushing for the passage of the equality act as international attention falls on Tokyo as it hosts the Olympics. The International Olympic Committee also issued a statement stressing the importance of inclusivity in sports.

Prospects for passage of the legislation before the current parliamentary session ends on June 16 are uncertain because of strong resistance from conservatives in Suga's party.

On Friday, members of LGBTQ groups and supporters submitted requests at the governing party’s regional headquarters in Tokyo, Osaka, Aichi and other areas.

Remarks by some party members during discussions of the bill last month sparked outrage from rights groups.

Lawmaker Kazuo Yana was quoted as saying in an closed-door session that same-sex relationships “defy the preservation of the species, go against the biological basis.”

Eriko Yamatani, known for her support of traditional gender roles and paternalistic values, called it “ridiculous” that transgender people with male bodies say they have female hearts and want to use women’s restrooms or participate in women’s sports.

This story has been corrected to show the current parliamentary session ends on June 16.