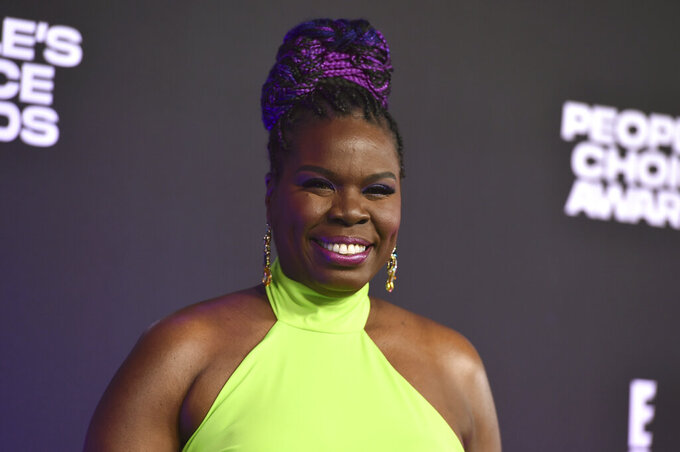 FILE - Leslie Jones arrives at the People's Choice Awards on Tuesday, Dec. 7, 2021, at the Barker Hangar in Santa Monica, Calif. Jones is free to take to social media to give her commentary about the Olympics after a misunderstanding with some of her posts. NBC spokesman Greg Hughes said Monday night, Feb. 7, 2022, that some of Jones’ videos that were blocked were the result of a “third-party error” and not NBC. (Photo by Jordan Strauss/Invision/AP, File)

Leslie Jones is free to take to social media to give her commentary about the Olympics after a misunderstanding with some of her posts.

NBC spokesman Greg Hughes said Monday night that some of Jones’ videos that were blocked were the result of a “third-party error” and not NBC.

“We have resolved the situation. She is free to do her social media posts as she has done in the past,” Hughes told The Associated Press. “She is a super fan of the Olympics and we are super fans of her.”

Jones took to social media Monday morning saying that she might give up live tweeting the Beijing Games.

“I love the athletes and they love me doing it. And I know y’all love it. But now it’s just gotten too hard. And no one is fighting for or with me. Soooo I guess I’ll leave it to the professionals,” Jones wrote on Twitter and Instagram.

Some of Jones’ posts were blocked because of increased policing of taped video displayed by social media companies. In 2014, NBC agreed to a $7.75 billion deal with the International Olympic Committee for rights through 2032.

NBC’s highlights rights are the most stringent. Non-NBC affiliates are not allowed to run highlights until after NBC signs off for the night, which is usually 2:30 a.m. in New York. There are also limits as to how many minutes can be shown.

Some of Jones’ posts, showing NBC’s coverage while she is commenting, are nearly 1 minute long.

Jones, who was on NBC’s “Saturday Night Live” for five years, has live-tweeted about the Olympics since the 2016 Rio de Janeiro Games. She was a guest of NBC in Rio and the 2018 Pyeongchang Winter Games.

Jones said on Twitter Sunday night that she enjoys watching and tweeting about the Olympics because people were telling her during the Rio Games that no one watches the Olympics.

“I have watched Olympics since I could walk lol,” Jones said. “Me and my dad. So this is from my heart. … These are athletes, this is like everybody coming together no matter like what’s going on and competing in the games.”