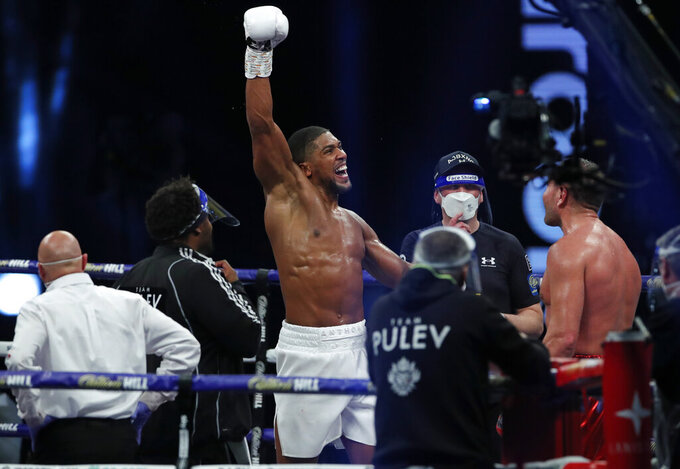 The fight pits two 2012 London Olympic gold medallists against each other: Joshua topped the podium in the super-heavyweight division and Usyk reigned supreme in the heavyweight bracket.

"We are two Olympic gold medallists who have fought our way to the top and never avoided challenges,” Joshua said in a statement on Tuesday. "The stadium is exceptional, the atmosphere will be electric, I’m honored to be the first person to fight in such an awe inspiring venue. I am ready to handle business.”

The mandatory WBO title fight fills a vacancy after Joshua's all-British blockbuster against Tyson Fury in Saudi Arabia in August was scuppered when a United States arbitrator ordered the WBC champion to take on Deontay Wilder again. That contest is in October.

Renowned for his nimble footwork, exemplary hand speed and head movement, Usyk collected all four major world belts at cruiserweight and has won all 18 of his professional contests, 13 of them inside the distance.

Having had just two fights in boxing’s blue riband division since stepping up, there remains lingering questions about the Ukrainian's punch resistance and his ability to trouble the top heavyweights with his power. Usyk is also 34, three years older than Joshua.

Joshua (24-1, 22 KO) was scheduled to fight Kubrat Pulev at Spurs’ home stadium in June last year but the coronavirus pandemic led to the contest being switched to Wembley Arena in December, when the Briton retained his titles with a ninth-round knockout victory.

There were 1,000 fans granted access to that fight, the last time Joshua was in action, but his Matchroom promoter is gearing up to welcome 60,000 spectators at the 62,850-capacity outdoor stadium.