Kane, Matthews and Jones first 3 picks for US Olympic team 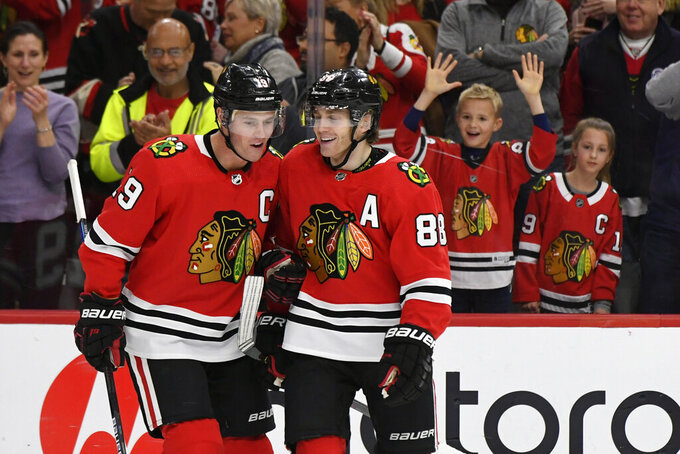 FILE - In this Dec. 15, 2019, file photo, Chicago Blackhawks' Patrick Kane (88) celebrates with teammate Jonathan Toews (19) after scoring his third goal of the game in the third period of an NHL hockey game against the Minnesota Wild in Chicago. (AP Photo/Paul Beaty, File)

“It’s no secret we’re excited about the prospects of our team for the 2022 Games,” said USA Hockey general manager Stan Bowman, who also runs the Blackhawks. “Patrick, Auston and Seth reflect the high level of talent that will make up our final roster as we strive to bring gold back home to the U.S.”

The U.S. has not won Olympic gold since 1980. NHL players began participating in the Olympics in 1998 and went five times before the league skipped the South Korea Games in 2018.

The league, Players’ Association and International Ice Hockey Federation asked each country to pick three players before the start of the NHL season. Each country’s list of 55 players is due in mid-October with final rosters — 3 goalies and 22 skaters — unveiled in January.

“We’ve got it pretty well nailed down,” Canada GM Doug Armstrong told The Associated Press by phone this week. “There’s a couple of tweaks that we’re going to have to make here before it has to go in, but I would say we’re one of the countries that you wish it didn’t exist because your remaining guys are going to have a great October, November, Decembers, but so be it. That’s just the way it has to be. Just because of the depth of the Canadian hockey program, you want to try and make that list as accurate as possible.”

The NHL and NHL Players’ Association have until January to pull out of the Olympics if the pandemic situation worsens. The tournament begins Feb. 9 in Beijing.