The Latest: Andreescu stays unbeaten at US Open with victory 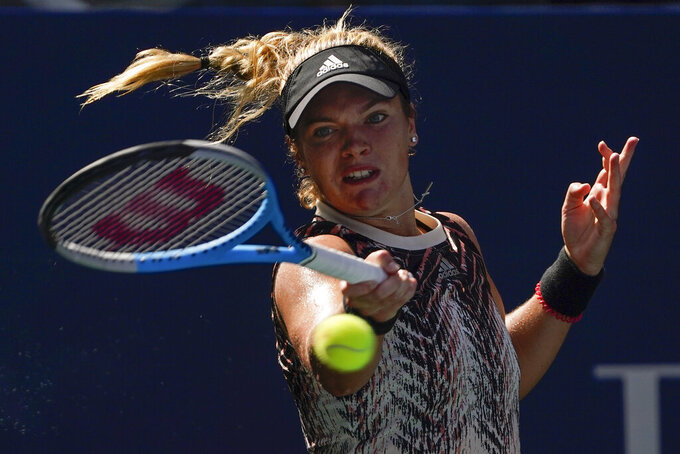 Catherine McNally, of the United States, returns a shot to Karolina Pliskova, of the Czech Republic, during the first round of the US Open tennis championships, Tuesday, Aug. 31, 2021, in New York. (AP Photo/John Minchillo)

Bianca Andreescu is still unbeaten at the U.S. Open.

She won the tournament in her debut in 2019, missed it last year because she was injured and now has closed out the first round with a three-set victory in which she needed a visit from the trainer for an upset stomach.

The injury-prone 21-year-old from Canada came back from a break down in the final set to defeat 45th-ranked Viktorija Golubic of Switzerland 7-5, 4-6, 7-5.

Andreescu broke Golubic to end it, then leaned over and shouted “Come on!”

Now Andreescu will put her 8-0 U.S. Open record on the line against American Lauren Davis next.

Golubic fell to 0-5 at Flushing Meadows.

Andreescu has been plagued by injuries since beating Serena Williams to win her U.S. Open debut as a 19-year-old and they popped up again as she played the last women’s match of the first round.

American Taylor Fritz has eliminated 14th-seeded Alex de Minaur in four sets at the U.S. Open to give the host country 13 men in the second round.

That’s the most players from the U.S. to win at least one match in the men's singles draw at Flushing Meadows since 15 did it in 1994.

Both players won the same number of points, 127.

Fritz had lost all four previous matches he had played against Australia’s de Minaur, who was a quarterfinalist at Flushing Meadows a year ago.

The 23-year-old Fritz will now face a fellow Californian in the second round when he meets 20-year-old Jenson Brooksby. Fritz is ranked 42nd; Brooksby is 99th.

The tournament said 13 of the 15 American men remaining are younger than 25 and a half-dozen went to college.

Bianca Andreescu will have to pull out a third set to keep her perfect U.S. Open record.

Andreescu has been plagued by injuries since beating Serena Williams to win her U.S. Open debut as a 19-year-old and they popped up again as she played the last women's match of the first round.

Brooksby was given a wild card into the tournament, though with his strong play this summer has surged into the top 100 and would qualify automatically as of now.

He reached the finals in Newport and the semifinals in Washington during the leadup to the U.S. Open.

Novak Djokovic has started his bid to make history at the U.S. Open with a four-set victory over Danish teenager Holger Vitus Nodskov Rune.

The top-seeded Djokovic is trying to complete the first calendar-year Grand Slam in men’s tennis since 1969 and collect a record-breaking 21st major singles championship.

Rune is an 18-year-old who is ranked 145th and qualified at Flushing Meadows.

Rune started having problems with cramps in the third set.

Novak Djokovic is tied at 1-1 after losing a second-set tiebreaker in his opening match.

Djokovic started fast against Danish qualifier Holder Rune, winning the first set 6-1 in 26 minutes. But Rune broke the No. 1 seed's serve en route to a 3-0 lead in the second.

Djokovic fought back to force the tiebreaker but Rune won it 7-5.

Djokovic is trying to become the first man to win all four Grand Slam tournaments in one year since 1969.

Cressy saved four match points in the fifth-set tiebreaker to knock off the two-time U.S. Open semifinalist. He had fans chanting “Cressy! Cressy!” as they rallied behind the Open qualifier.

The French-born Cressy was a collegiate star at UCLA and used a big serve to slam 46 aces and advance into the second round. Down 5-2 in the deciding tiebreaker, the 24-year-old pulled off the biggest win of his pro career.

The reigning Wimbledon champion, Barty skipped last year’s open because of the pandemic. Barty’s Grand Slam titles at Wimbledon and at the 2019 French Open came on grass and clay. She’s trying to make a major breakthrough on hard courts.

The 25-year-old Barty shook off a lull in the second set and won in a sensational tiebreak. She finished with 31 winners, including 11 aces.

Alexander Zverev opened his bid for a second straight U.S. Open final appearance with a win in his opening match.

Zverev won the first two sets last year in the final against Dominic Thiem before losing the match. It was Zverev’s first Slam final.

Zverev won the gold medal at the Tokyo Olympics and is one of three players with four titles this season.

The German knocked off top-ranked Novak Djokovic in the semifinals of the Tokyo Games. Djokovic is trying to become the first man since 1969 to win a calendar-year Grand Slam. He plays Tuesday night.

Karolina Pliskova and Reilly Opelka were among the early winners on the second day of the U.S. Open.

Pliskova, a 2016 finalist, beat Caty McNally 6-3, 6-4 in her first-round match as the former world No. 1 tries continues her rebound from several lean years on the tour. Pliskova lost the Wimbledon final this year and fell to 0-2 in major finals.

Mackenzie McDonald, another American, beat David Goffin 6-2, 7-5, 6-3. McDonald needed surgery for a torn hamstring tendon a little more than two years ago and couldn’t walk for weeks. He lost the Citi Open final in August in Washington.

The second day of the U.S. Open is underway and the No. 1 seeds in both draws are set to compete.

Novak Djokovic opens his bid to become the first man since 1969 to win a calendar-year Grand Slam when he plays 18-year-old qualifier Holger Vitus Nodskov Rune of Denmark in the first match of the night session in Arthur Ashe Stadium. Djokovic would break a tie with Roger Federer and Rafael Nadal for most major titles among men if he wins the tournament. They all have 20.

Djokovic is 15-0 in the first round at the U.S. Open and has won eight of the last 12 Grand Slam tournaments.

Andy Murray was still hot a day after he lost to Stefanos Tsitsipas in the opening round. Murray said after the match that he “lost respect” for Tsitsipas for pushing the boundaries when it comes to taking breaks during a match. Murray tweeted on Tuesday that it takes Tsitsipas “twice as long to go the bathroom as it takes Jeff (Bezos) to fly into space.”