The Latest: NWSL moves to allow training in small groups 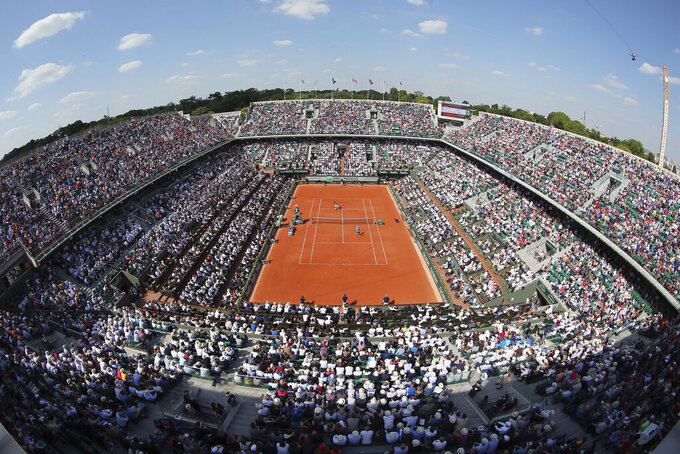 The National Women’s Soccer League says players may start training in small groups, provided it is done under league protocols and meets the requirements of local authorities.

Teams will be able to progress to full team training on May 30 once they complete five days of small group training.

“Following the advice and counsel of our medical advisers, the NWSL is pleased to be taking the next steps to safely return to competition,” Commissioner Lisa Baird said Monday in a statement.

The small groups cannot exceed eight players during Phase 2 of the nine-team league’s return to play protocol. Players must complete a pre-training assessment and undergo daily symptom and temperature screenings as well as other tests.

Players will have to arrive in their training gear and wear masks when arriving and leaving the facility. They will be allowed to use weight rooms, training rooms and meeting rooms.

The NWSL season was originally scheduled to start April 18. The league allowed voluntary individual outdoor workouts on May 6.

The German soccer federation says it faces heavy losses this year due to the coronavirus pandemic.

Treasurer Stephan Osnabrügge has presented figures to a general meeting showing a possible loss of nearly 77 million euros ($83 million) in the worst-case scenario. The deficit would be smaller if national-team games can resume in the second half of 2020.

Osnabrügge says that means the “deepest economic crisis” in the DFB’s history but that it is not facing insolvency.

In a meeting held over video conferencing the DFB ended the season for all junior competitions and for the women’s second division.

The DFB confirmed the men’s third division will resume Saturday despite objections from some clubs and state federations. The first and second divisions restarted earlier this month.

Barcelona has launched a line of protective masks for its fans during the coronavirus pandemic.

The club says the masks are available in three different models with exclusive designs using Barcelona’s colors. They can be found online or in physical stores as they gradually reopen to the public beginning on Monday.

The masks are made in Catalonia using 100% ecological cotton. Barcelona says they comply with all “health requirements and regulations.”

The masks are reusable and guaranteed to up to 40 washes.

Spain was one of the hardest hit countries by the coronavirus pandemic with nearly 30,000 deaths. Masks are now obligatory for the entire population in most situations.

Barcelona and most Spanish clubs sustained heavy financial losses and reduced the salaries of its players during the pandemic.

The top women’s soccer league in England has been canceled because of the coronavirus outbreak.

The Football Association says a decision was taken to end the Women’s Super League with immediate effect following “overwhelming feedback from the clubs” and to give them the chance to “prepare and focus on next season.”

Manchester City was leading the league by a point from Chelsea, which had a game in hand.

Arsenal was a further three points behind and also had a game in hand on City.

Recommendations for sporting outcomes such as which team should represent England in the Women’s Champions League next season will be sent to the FA board.

The second-tier Women’s Championship has also been canceled.

Japan Prime Minister Shinzo Abe says the swift development of vaccines and effective treatments for COVID-19 are priorities towards achieving the Tokyo Olympics next year.

Abe says recovery from the coronavirus pandemic only in Japan would not be enough to hold the Games because it involves spectators and athletes from around the world.

He reiterates that the government hopes to hold the Tokyo Games “in a complete form” with spectators as a proof of human victory against the coronavirus.

Japan and the International Olympic Committee have agreed to postpone the Games by one year to July 2021.

Experts say developing an effective and safe vaccine by the Games next year will be difficult.

The French tennis federation will set aside nine million euros ($9.8 million) for its players who financially struggle as a result of the coronavirus pandemic.

The money will come from a larger 35-million euro ($38.1 million) support plan for French tennis as a whole. It will go to the players ranked outside the Top 100 who won’t receive any compensation from tennis’ international governing bodies.

Bernard Giudicelli, the president of the French tennis federation, told a conference call Monday that 66 male players and 39 female professionals will benefit from the allocation. Beach tennis and paddle tennis players, as well as wheelchair professionals and players with disabilities, can also sign up to the scheme.

The support plan will be operational from June 3 and will last until Aug. 31, 2021. It will also help clubs, coaches, instructors, umpires, other officials and tournament organizers affected by the health crisis.

The men’s and women’s professional tours are suspended until at least July 13.

The Euroleague basketball season has been canceled because of the coronavirus pandemic and no championship will be awarded.

The league says it considered and rejected various plans for continuing the season, including proposals from many cities to hold remaining games. It instead opted to focus on the 2020-21 season.

The league adds that “for reasons of sporting integrity, all competition system modifications including a reduced number of teams were discarded.”

The Euroleague has 18 teams across 10 European nations. The different lockdown and border restrictions in those countries made it difficult to continue games.

The foundation will dispatch them to organizations and charities in need of equipment to help fight the spread of the coronavirus.

The shipment was delivered last week and is being stored at PSG’s Parc des Princes. The stadium has been operating as a logistics support base in the Greater Paris region.

Sabrina Delannoy, the deputy director of the Paris Saint-Germain Foundation, said on Monday that the donation “will enable our many partner charities to continue working in safe conditions and to pass on this equipment in turn to the people who need it most.”

PSG and Tencent sealed a partnership during the French club’s Tour in China last year.

The chief executive of West Indies’ cricket team says a plan is in place to fly a 25-man squad to England around June 8 ahead of a three-test series starting a month later in bio-secure stadiums with no spectators.

Johnny Grave says he has been in discussions with the England and Wales Cricket Board for the past six weeks and that Cricket West Indies is expecting a formal offer to go ahead with the tour in the coming days.

Grave says in an interview with espncricinfo.com the players would take privately sourced tests for COVID-19 three or four days before the departure date. They would then convene at a base in Antigua and fly out in one aircraft on the same day, before being transported to their quarantine and training venue where they would spend about three weeks.

He adds that the current plan is for the test matches to start July 8, July 16 and July 24. The tour was due to start on June 4 but no professional cricket can be played in England before July 1 because of the coronavirus outbreak.

Grave says there is still some apprehension among players and support staff about leaving their families for seven weeks, travelling to Britain and playing in bio-secure venues, but that no player has said formally he does not want to tour.

The Italian Winter Sports Federation (FISI) would like to postpone next year’s Alpine skiing world championships in Cortina d’Ampezzo until March 2022.

Malagò says “this is the best solution” in order to avoid the championships being canceled or shortened after the fallout in Italy from the coronavirus pandemic.

Malagò says FISI would officially send the request to the International Ski Federation’s (FIS) board on Monday.

Cortina was already forced to cancel the World Cup finals in March this year due to the advancing virus.

Moving the worlds to March 2022 would put the event one month after the 2022 Beijing Olympics and likely force FIS to cancel that season’s finals in Méribel and Courchevel, France.

Worlds are usually held every other winter, in odd years.