In leaked audio, Piqué asks for help to play at Olympics 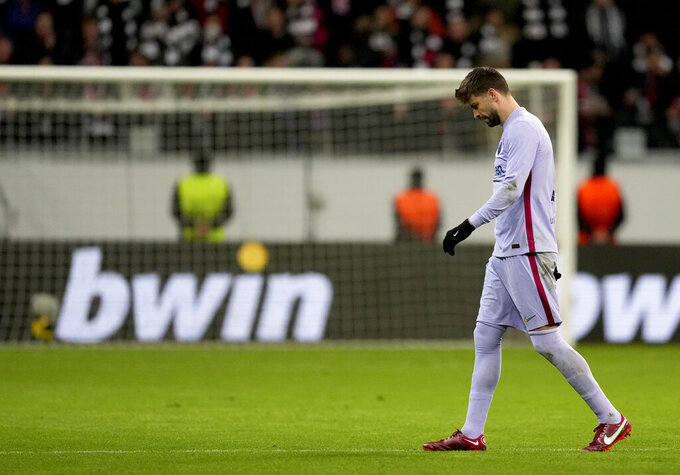 MADRID (AP) — Gerard Piqué asked for help from the president of the Spanish soccer federation to play at the Tokyo Olympics, audio stolen from the federation revealed Wednesday.

The details, published by the El Confidencial newspaper, came after other audio had revealed that the Barcelona defender helped to negotiate a 24 million euro ($26 million) commission to take the federation's Spanish Super Cup to Saudi Arabia.

Piqué can be heard asking federation president Luis Rubiales to talk to Olympic team coach Luis de la Fuente and set up a meeting between them.

“You have to do this for me, Rubi, you have to make it happen,” Piqué said. “We have to keep it a secret and talk to the coach ... I’ll go to Madrid and we sit with him. We have to do it in a way that it’s not out anywhere. The three of us have to keep this very secret until the end, don’t you think?”

Rubiales agreed to talk to the coach but said it would be up to De la Fuente to decide what to do.

“Yes, we have to keep it a secret, and if the coach wants to do it, let’s go ahead with it, I’d be thrilled,” Rubiales said.

Piqué said he didn’t want the information leaked to keep other players from trying to request the same thing. He said he had heard that Sergio Ramos also wanted to play and likely leaked that to the media to try to pressure the coach.

The president eventually talked to De la Fuente and said the coach asked to wait until the national team had secured its qualification for the Olympic tournament.

Rubiales spoke publicly for the first time in a news conference on Wednesday and said that Piqué was not the only player who talked to him about going to the Olympics.

“I talked to De la Fuente about him and about other players as well,” Rubiales said. “I told him that some called and that he had to make his own decision. Piqué wasn't the only player who called.”

Neither Piqué nor Ramos made it to the Olympic squad, which ended with the silver medal after losing to Brazil in the final. The over-23 players called up to the team were Mikel Merico, Marco Asensio and Dani Ceballos.

The release of the audio this week came after the federation said it was targeted by hackers who also stole emails, text messages and documents involving its top officials. The information was then released to El Confidencial.

In some of the audio, Piqué told Rubiales they needed to get the former King Juan Carlos involved to try to help negotiate the Super Cup deal with the Saudi Arabians.

Piqué defended himself on Tuesday after it was revealed he helped take the revamped tournament to Saudi Arabia as part of an agreement worth 40 million euros ($43.4 million) per tournament for the federation.

Piqué’s Kosmos group would be paid 4 million euros ($4.3 million) per tournament by the Saudi organizers for negotiating the six-year agreement at the time. Piqué said the money would be divided between the clubs, and the federation would keep about 6 million euros ($6.5 million). He said he never received anything from the Spanish federation.

The 35-year-old defender said he didn’t have anything to hide and was proud to have achieved the Super Cup deal. He said he knows how “to separate a commercial deal from my job as a player" and that "a conflict of interest will depend on each person’s own values.”

The outspoken Rubiales defended Piqué, saying there was nothing illegal or unethical in what was done.

“I wished there were more players like Piqué, who are capable of doing other things,” Rubiales said. “I’ve always pushed to keep players from being done after they stop playing.”

Rubiales and Piqué also denied wrongdoing in dealings with the club owned by Piqué, Andorra, and dismissed criticism that Real Madrid and Barcelona were being favored by receiving more money than other clubs in the Super Cup deal.

They said they believed there was no conflict of interest — or reason to question refereeing bias — even though the deal was worth a lot more when Madrid and Barcelona qualify for the tournament, and Rubiales’ salary increases when the federation earns more money with them playing in the competition.

Rubiales said he understood criticism by people like Atlético Madrid coach Diego Simeone, who said that it appeared that for the federation it was better to have Madrid and Barcelona finishing first and second in the league so they could play in the Super Cup. Rubiales said he was open to talk to him and explain everything.

Rubiales was upset that few people were talking about the attack by hackers on the federation.

“I'm afraid," Rubiales said, "that these same people who got the documents can also come and put a bag of cocaine in the trunk of my car.”