Lindsey Vonn: I wanted to end my career at Cortina worlds 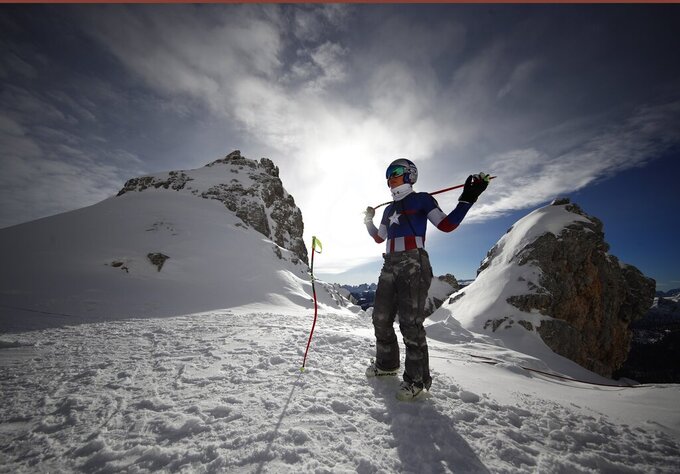 FILE - In this Thursday, Jan.18, 2018 file photo, United States' Lindsey Vonn prepares for an alpine ski, women's World Cup downhill training, in Cortina D'Ampezzo, Italy. Having retired from racing in 2019, Vonn is offering her thoughts on the 2021 world championships in Cortina in a diary with the Associated Press. (AP Photo/Gabriele Facciotti, file)

EDITOR’S NOTE: Lindsey Vonn is the most successful female ski racer of all-time with 82 career World Cup victories. She also holds the record for most victories at Cortina d'Ampezzo with 12 — evenly split between downhill (6) and super-G (6). Cortina was also where Vonn recorded the first podium result of her career, back in 2004, and where in 2015 she broke Annemarie Moser-Pröll’s 35-year-old record of 62 World Cup wins across all disciplines. Having retired from racing in 2019, Vonn is offering her thoughts on the world championships in Cortina in a diary as told to AP Sports Writer Andrew Dampf.

In an ideal world, I would be competing in a ski race for the final time this weekend — in the downhill at the world championships in Cortina d’Ampezzo, Italy.

You really can’t ask for anything better than that.

Unfortunately, injuries got in the way and my career ended prematurely. So I’m watching from afar.

A lot of casual viewers don’t understand why they postpone ski races when it snows or there’s fog or other difficult conditions. There’s a good reason, though, why the start of these worlds was postponed for three full days.

I applauded when they called off the women’s super-G on Tuesday due to fog hanging over the course after numerous delays.

It reminded me of the 2013 worlds in Schladming, Austria, when they made the wrong decision and started the super-G hours late in fading light and I tore up my right knee in a horrendous crash.

We shouldn’t have been racing and that kind of triggered a long series of injuries for me, missing the (2014) Olympics being one of the biggest disappointments. For world championships you always want fair and safe conditions and I’m glad that they delayed it to the point where they could have that.

I was also glad to see Lara Gut-Behrami win her first gold medal. A former overall champion and the winner of 30 World Cup races, it marked a major breakthrough after three silvers and three bronzes at worlds and Olympics.

It’s hard to be second or third all the time and I’m happy at this point in her career she was able to get the win, especially with the season that she’s been having. It’s really difficult to go into the world championships winning four races in a row. The pressure is really intense.

A lot of successful World Cup racers never actually win a world championship gold medal. So to kind of put the cherry on top of her career, it was a great, great result for her.

There are just so many variables in ski racing. Executing on one day for the Olympics or world championships is always one of the more challenging things to do in our sport.

You can get wind or the weather can change or you just unfortunately happen to have the wrong wax on that day. A million things can happen. You could have the wrong bib number.

At the 2018 Olympics in Pyeongchang I drew No. 1 for the super-G and made a mistake in my run because I didn’t have any information on the track. The mistake that I made was easily fixable had I known that that was an issue.

Running No. 1 is incredibly challenging. You saw on the men’s side today when the first three racers didn’t finish. Because you don’t always know the speed you’re coming into certain turns with. You have to make split-second decisions and having not run the track sometimes you make the wrong one.

Ski racing isn’t like tennis, where you have time to recover from a deficit. You only got about a minute and a half and usually it’s very difficult to come back from a mistake. I’ve done it — at my other favorite track in Lake Louise, Alberta. But most of the time, you have to be nearly perfect — like Lara was today.

Which brings me to Mikaela Shiffrin. She ended up with bronze today but could have won if not for one single mistake toward the end of her run.

Mikaela hadn’t raced in a long time in super-G and in super-G it’s a lot to do with timing and it’s just extremely difficult to execute on that little training and that little race experience.

Still, a bronze medal is an amazing accomplishment and should not be underestimated or underrated.

The nice thing about today was that the favorites won both races.

Vincent Kriechmayr of Austria mastered a tricky course for the men’s title. It was a new course for just about all of the men except for the host Italians — and me.

The men’s course is right next to the women’s course and we free skied down that trail every time for warmup. So it was interesting to see a race be held down it. It was always actually one of my favorite parts of Cortina, because I just bombed down that steep section.

Wish I was there.