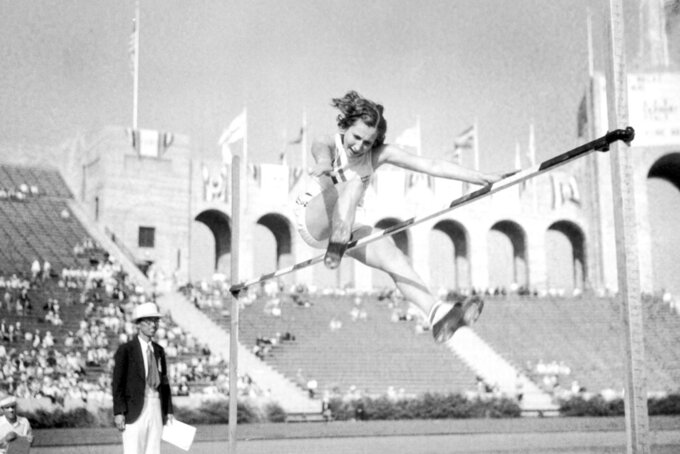 FILE - In this Aug. 7, 1932, file photo, American athlete Jean Shiley, from Philadelphia and captain of the U.S. Women's track and field team, clears the bar at 5 feet, 5 ¼ inches to break the Olympic and world record during at Olympic Stadium in Los Angeles, during the Summer Olympic Games. (AP Photo/File) 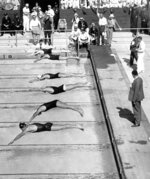 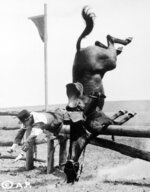 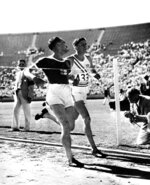 Even though the 1932 Summer Olympics were held during the Great Depression, Los Angeles first chance to host the Games still stand as a model for innovation and profitability.

It was the first time that the medalists stood on a victory platform and watched the raising of the national flag of the winner. Previously the flag of the winning nation was raised after the event, but medals were awarded at Closing Ceremony.

It was also the first Games most of the athletes were housed in an Olympic Village. Men were housed in facilities in south Los Angeles while women stayed in a hotel.

“Here was a great happy family of forty nationalities putting the politicians of the world to shame; and not a single athlete forgot for a moment the country and blood from which he sprang, nor that shortly he would pit his skill and character against his brethren from other lands for the honor of country and sport,” the International Olympic Committee's Official Report said about the village. “Night after night, within the portals of the Village, victor met vanquished in the embrace of true personal friendship and the understanding of man to man.”

The Olympics took place over 16 days (July 30 to Aug. 14) and included three weekends, which is a schedule that has been mostly kept for Summer Games ever since. Many of the previous nine Games had lasted over two months.

Los Angeles was the only city to bid on the Games when they were awarded in 1925. Many venues, including the Memorial Coliseum, Rose Bowl and Olympic Auditorium had already been constructed.

Despite the worldwide depression, the Games finished with a $1 million profit, the fist time the Olympics didn’t lose money. It would take 52 years, when Los Angeles hosted it again, for the next debt-free Olympics.

Babe Didrikson qualified to compete in five events, but women were only allowed to compete in three. She remains the only track & field athlete to medal in a running, throwing and jumping event in the same Games.

Didrikson began her Games by taking gold in the javelin. Her first throw was good enough to stand. She equaled the world record of 11.8 seconds in qualifying heats for 80 meter hurdles and then set the record at 11.7 seconds the final.

In the high jump, Didrikson tied with Jean Shirley for the top spot at 5-5, but she ended up taking silver after officials ruled Didrikson's had dived over the bar, even though she had used the same jump style during the entire competition.

The Associated Press named Didrikson the Greatest Female Athlete of the 20th century.

Eddie Tolan became the first Black American sprinter to win the 100 and 200 meters in the same Games. The Detroit native also set Olympic records in both races.

Tolan and teammate Ralph Metcalfe appeared to finish in a dead heat in the 100, but Tolan got the win after officials reviewed the finish and determined that his entire torso was past the finish line before Metcalfe's. Both were time at 10.3 seconds.

Tolan didn't need a photo to determine his win in the 200 as he beat Metcalfe by 1.2 meters. His time of 21.2 seconds bettered the previous Olympic mark by four-tenths.

Helene Madison was the most successful American athlete with three gold medals. She was part of the world record setting 400 meter freestyle relay team and set Olympic marks in the 100 and 400 freestyles.

Italy's Romeo Neri was the most successful male athlete at the Games, taking gold in three gymnastics events. He won the all-around and parallel bars as well as being part of Italy's victory in the team competition.

American football made its only Olympic appearance as one of two demonstration sports. The West all-stars, featuring seniors from Southern California, Stanford and Cal, faced their East counterparts (Harvard, Yale and Princeton) at the Coliseum during the final week of the Games.

USC's Gus Shaver ran for 145 yards and a touchdown as the West edged the East 7-6.

Sweden’s Ivar Johansson took gold in the middleweight division in freestyle wrestling and then dropped 5 kilograms to compete in Greco-Roman's welterweight class. He is the only wrestler in Olympic history to win in two different weight classes in the same games.

The Games of the 10th Olympiad saw 1,332 athletes (including 126 women) represent 37 nations. Colombia and China participated for the first time. There were 117 events in 14 sports contested. The United States easily won the medals race with 103, including 41 gold. Italy was second with 34 total medals and 12 gold.