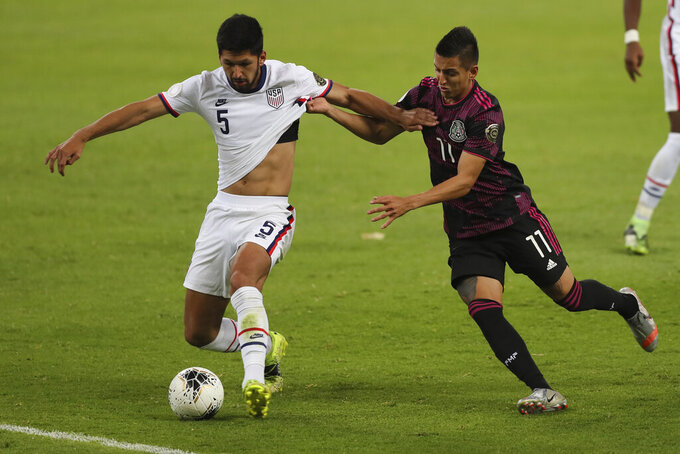 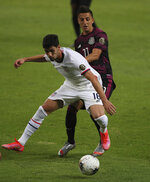 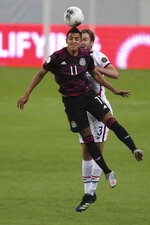 Sebastian Soto's sloppy giveaway cost the United States in a 1-0 loss to Mexico.

Now comes the winner-take-all semifinal Sunday night against Honduras or Canada for a trip to the men’s Olympic soccer tournament.

“Ultimately difficult to lose the game on an individual error,” U.S. coach Jason Kreis said after Soto gifted Uriel Antuna a 45th-minute goal at Guadalajara on Wednesday night. “The most important game is coming, so we need to move forward very quickly and prepare ourselves for that.”

Both the U.S. and Mexico were assured of advancing from Group A to semifinal berths. The U.S. finished Group A in second place at 2-1 and will play Honduras, unless Canada beats the Catrachos in Thursday’s finale of Group B, which also includes El Salvador and Haiti.

Mexico, the 2012 Olympic champion, won its 14th straight Olympic qualifier dating to 2008 and finished first in Group A at 3-0.

Semifinal winners from the North and Central American and Caribbean region get the final two places in the 16-nation field for the Olympics, to be played from July 21 to Aug. 7 in Tokyo, Kashima, Miyagi, Saitama, Sapporo and Yokohama.

“We wanted to win the game to be at the top of our group,” American defender Mauricio Pineda said. “We came short of that, but we're still in the semifinal, and I think we're going to have to flip the page quick.”

Antuna, a 23-year-old Chivas winger who spent 2019 on loan to the LA Galaxy from Manchester City, picked up a loose ball about 35 yards from goal that Soto mis-hit a casual back-pass following a feed upfield from Henry Kessler. Antuna took several touches to keep space from Kessler and Pineda as he cut to the edge of the arc, then beat goalkeeper David Ochoa with a right-footed shot for his second goal of the tournament.

“It's a game of small details and getting all those right, and against the best teams you're going to get punished if you make even the smallest of mistakes," Pineda said. "So today we were punished for that, and I think we have to start punishing teams on the other side of the field, as well."

“Ultimately the goal came from their press: a forward that dropped down and instead of controlling the ball and taking two touches," the coach said. "He had all kinds of time. He tried to play a first-time pass and got intercepted."

Clubs do not have to release players for Olympic qualifying or the Olympics, denying most of the best-known players from tournament teams

Because of the delay caused by the novel coronavirus pandemic, FIFA kept eligibility to players born Jan. 1, 2007, or later. Each Olympic team can use three wild-card players over the age limit.

Kreis made six changes to his starting lineup for the second straight match, giving Kessler at central defense and Soto at forward their first starts and reinserting Ochoa, outside back Andres Herrera, and midfielders Hassani Dotson and Djordje Mihailovic, who started the opening 1-0 win over Costa Rica.

Outside back Julian Araujo, Pineda in central defense, and midfielders Andrés Perea, Johnny Cardoso and Sebastian Saucedo also started the 4-0 victory over the Dominican Republic.

Kreis made a triple substitution in the 61st minute, inserting Jackson Yueill, Jonathan Lewis and Jesús Ferreira, who carried a yellow card from the opener. Taylor Tessman entered in the 76th for Dotson, who appeared to turn his left ankle. Dotson scored twice against the Dominicans.

“We saw really bright spots," Kreis said. "I think we also saw spots where we were like, wow, these guys are still rusty and still making mistakes that you don’t typically see them make in passes and movements.”

Notes: Sebastián Jurado replaced Mexico goalkeeper Luis Malagón in the 39th minute after the starter appeared to injury a wrist in a collision. ... In the first game of the doubleheader, Costa Rica routed the Dominican Republic 5-0 in a matchup of eliminated teams. Randall Leal of Major League Soccer’s Nashville scored twice, and Manfred Ugalde, Bernald Alfaro and Aaron Salazar had one goal each.