Nearly 80% of US Olympians signed up for opening ceremony 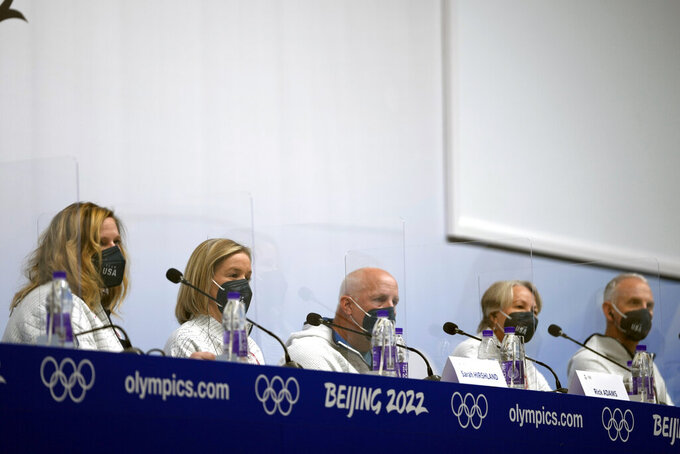 ZHANGJIAKOU, China (AP) — About 80% of the U.S. team’s athletes signed up to go to Friday’s opening ceremony at the Beijing Olympics, dimming any notion that they would skip the celebration in a show of protest.

The U.S. Olympic and Paralympic Committee said 177 of its 223 athletes wanted to go to the ceremony at the Bird's Nest.

Not a single athlete who qualified chose not to come, leaving the political statements to the U.S. government, which will not send dignitaries to the Games in protest of China's human-rights record and other issues.

At a news conference in Beijing, held hours before the opening, CEO Sarah Hirshland said the athletes have been briefed — some of them multiple times — about the laws and customs of China and have been advised to make their own choices when it comes to protesting or demonstrating on Chinese soil.

“We want to make sure that the athletes understand the IOC guidelines and the rules of the games that they’re signing up for in that environment,” Hirshland said.

Chief of sport performance Rick Adams said that having nearly 80% of the delegation at the opening could be close to a record. It's not uncommon for athletes to skip because they have competition the next day, are staying far away, or compete late in the Olympics and haven't even arrived.

Back in the States, House Speaker Nancy Pelosi decried China's human-rights record, but said athletes should focus on their sports instead of speaking out.

"Do not risk incurring the anger of the Chinese government because they are ruthless,” Pelosi said.

Pelosi's comments were not a subject Hirshland was willing to touch.

“The piece of the comments she made that I was grateful for was, she wished Team USA good luck and said they've got the support of their country, and that's what we're looking for,” Hirshland said.