Norwegian beach star Mol keeps Olympics all in the family 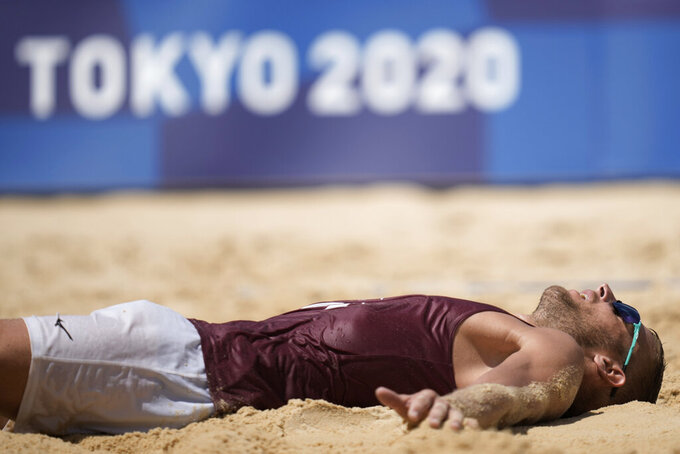 Edgars Tocs, of Latvia, lies in the sand as he celebrates winning a men's beach volleyball quarterfinal match against Brazil at the 2020 Summer Olympics, Wednesday, Aug. 4, 2021, in Tokyo, Japan. (AP Photo/Felipe Dana)

TOKYO (AP) — Even with the pandemic keeping most family at home, Norwegian beach volleyball player Anders Mol has plenty of people in Tokyo to support him.

Mol’s father, Kaare, is his coach, and his uncle is at the Olympics as the team’s assistant coach. Mol’s brother and cousin are here as training partners.

“It’s kind of a family business we are running,” Kaare Mol said after his son and Christian Sorum beat a Russian team in straight sets to advance to the semifinals.

Facing the team it had lost to in the pool stage, the top-seeded pair beat Ilya Leshukov and Konstantin Semenov 21-17, 21-19 on Wednesday. The Norwegians advanced to the semifinals to face Latvia, which eliminated Brazil and 2016 gold medalist Alison in the second match.

Mol and Sorum earned the top seed in the Olympics by finishing atop the FIVB’s qualification standings. But to do so, Kaare Mol said, they spent about 250 days a year on the road over the three-year period that was extended by the COVID-19 pandemic.

The coaches split the travel, which has Kaare Mol on the road with his son for about 150 days. With the pandemic limiting who is able to travel to Japan, Mol is the rare parent able to watch his child compete.

“When you are in the Olympics, I don’t feel like he is my son. He is my athlete,” the elder Mol said. “To have some father and son time ... you give him a hug after. That’s when you feel like a father.”

Alison won the gold medal at home in Rio de Janeiro while partnered with Bruno Oscar Schmidt, continuing a tradition that has made Brazil one of — along with the United States — beach volleyball's most decorated winners.

But the Latvian pair of Martins Plavins and Edgars Tocs knocked Schmidt out in the round of 16 on Monday, and then did the same to his 2016 partner with a 21-16, 21-19 victory on Wednesday.

Only one of the two Brazilian women’s teams has survived the quarterfinals, meaning the longtime power can win at most one medal in Tokyo. That will be its worst performance since the sport was added to the Olympics in 1996.

The United States also has just one team in the semifinals and can at best match the lowest beach volleyball medal haul in its history.

Meanwhile, Latvia is the only country with multiple teams still alive. Tina Graudina and Anastasija Kravcenoka will play in the women's semifinals on Thursday.

“We are a big beach volleyball country,” Tocs said, half-seriously.