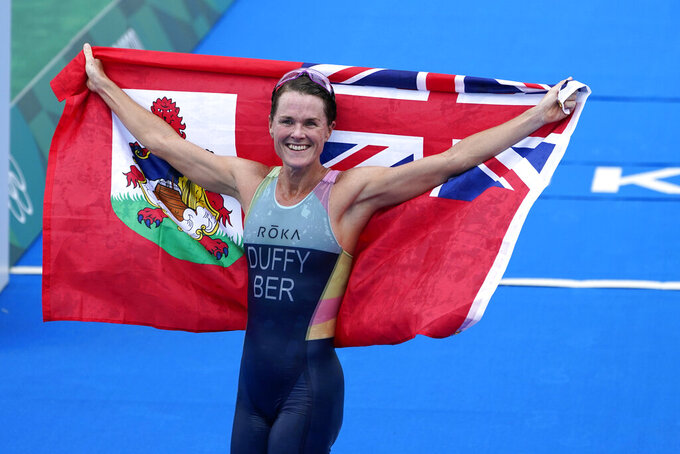 TOKYO (AP) — The Tokyo Olympics have brought some unexpected gold medals for countries and teams which rarely, if ever, see their athletes on the podium. Here's a look at some of the teams which have won events despite having little history of Olympic success.

The Atlantic island of only 65,000 people — they could all fit into the Olympic Stadium in Tokyo — has its first gold medalist after Flora Duffy won the women's triathlon on Tuesday. She is one of only two athletes representing the self-governing British territory at the Tokyo Games. Duffy had to put up with wind and driving rain to win her gold as a storm moved up the Japanese coast. “I was Bermuda’s first medal hope in many years. I wanted to achieve this for myself and my country. I was overwhelmed,” she said.

After 97 years of competing at the Olympics, the Philippines finally has a gold medal to celebrate. Hidilyn Diaz was up against the world record holder in the women's 55-kilogram weightlifting category but still won. Diaz is now looking forward to a long-awaited return home after the coronavirus pandemic left her stranded in Malaysia without seeing family and friends. “To all the young generation in the Philippines, please dream high,” Diaz said.

Hong Kong last won a gold medal 25 years ago, a year before the port city was returned to China from Britain. Windsurfer Lee Lai Shan had a sculpture installed in her honor on the beachfront. Fencer Cheung Ka Long could be in line for a similar honor after he became Hong Kong's second Olympic champion with victory in the men's saber on Monday. “It means a lot to show to the world we can do it,” Cheung said.

Sometimes it pays to specialize. Kosovo has made its name in judo since making its debut at the 2016 Rio de Janeiro Olympics. The Balkan nation has three medals in its history — all of them gold, all won by women and all in judo. Majlinda Kelmendi blazed the trail when she won the 52-kilogram category five years ago. When Distria Krasniqi and Nora Gjakova both won gold in Tokyo, Gjakova paid tribute to Kelmendi's pioneering example, saying “she opened the door for us to dream big.”

The North African country had won four gold medals since it's Olympic debut at the 1960 Rome Games. Make that five after a surprising win from the outside lane by 18-year-old swimmer Ahmed Hafnaoui in the men's 400-meter freestyle. “I was in tears in my eyes because when I see the flag of my country and I hear the anthem in the background, it was great,” Hafnaoui said. He could reach the podium for the second time in the upcoming 800, which has a final Thursday.

The northern European country of 1.3 million marked its first Olympic gold medal since 2008 and first in fencing after it's women’s épée team beat South Korea 36-32 in the final. Katrina Lehis scored the decisive points after the score was level going into the final bout and said team spirit was crucial to the win. The team got a call from President Kersti Kaljulaid shortly after and Lehis has high hopes for the future of fencing back home. “I think we are kind of like the national sport now,” she said.

It wasn't quite a gold medal, but it still meant a lot to Turkmenistan, a sparsely populated, gas-rich nation in Central Asia. Polina Guryeva was the first athlete representing an independent Turkmenistan, rather than the former Soviet Union, to stand on an Olympic podium with silver in weightlifting. Her final lift to secure a medal sparked vocal celebrations among team officials in the audience, who embraced and held up large flags. “I think I've entered the history of Turkmenistan,” Guryeva said.