Olympics latest reminder of down year for South Koreans 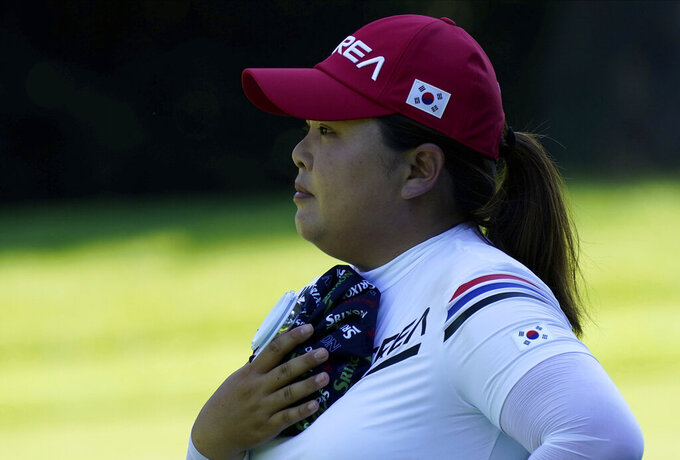 Inbee Park, of South Korea, refreshes with an ice pack on the 14th hole during the second round of the women's golf event at the 2020 Summer Olympics, Thursday, Aug. 5, 2021, at the Kasumigaseki Country Club in Kawagoe, Japan. (AP Photo/Matt York) 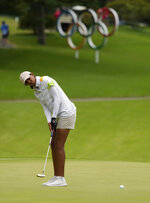 KAWAGOE, Japan (AP) — The LPGA Tour is about two-thirds of the way through its season, and the last of the five majors is next week in Scotland. Missing thus far is the usual dominance of South Korea.

The Olympics was the latest reminder of that.

In the five times a country has had four players in the Olympics, this South Korean squad was the only one that didn't have anyone on the podium. The best finish came from Jin Young Ko and Sei Young Kim, who tied for ninth.

It stands out even more in the majors.

South Korea has produced at least one major champion every year since 2011, a streak that could end if one of them does not win at Carnoustie next week.

As far as LPGA Tour victories, the United States leads the way with six titles. Nelly Korda has won three of them, and that doesn't include her gold medal. Thailand is next with four victories, including a major champion in Patty Tavatanakit. South Korea has three.

End of an era? It's a little early for that.

“It's been a tough year this year for the South Koreans,” Inbee Park said. “I just think the level of competitors is getting stronger and stronger, especially a lot of players from Asia — not just Korean, but powerful players in Thailand and the Philippines. It's getting tough at the top.”

Along with Tavatanakit at the ANA Inspiration, Yuka Saso won the U.S. Women's Open and Minjee Lee of Australia won the Evian Championship.

It's hard not to wonder how much the COVID-19 pandemic took a toll. Park makes her home in Las Vegas. For the most part, the rest of the South Koreans stayed home even after the LPGA Tour resumed in late July of last year.

Hyo-Joo Kim didn't play on the LPGA in 2020. Ko and Jeongeun Lee6 did not compete in America for a full year (Ko returned and won the CME Group Tour Championship).

South Koreans had seven victories in 2020, their fewest since winning eight times in 2012. Now they have only three, though there's still time.

Park sees the pandemic as a reason, but not an excuse.

“It's been a tough time for everyone,” she said. “It's hard to get momentum going when you're taking so much time off. It's happened to us, as well. But it's not just our problem. We need to improve, that's for sure.”

IT'S ALL ABOUT TIMING

Every shot counts, and there's no need explaining that to Harris English. He looked to have the FedEx St. Jude Invitational in the bag until two double bogeys and a bogey on a par 5 led to a 40, one shot out of the three-way playoff.

The difference can be counted in so many ways.

English is No. 8 in the Ryder Cup standings — a victory would have put him sixth in his bid for one of the six automatic spots. He earned $515,000. He would have made $3.3 million more than that by winning — not only the $1,820,00 for the title, but a $2 million bonus for leading the FedEx Cup and being out of reach of anyone playing this week.

But then, English can say the same about the Palmetto Championship in May, where he shot 40 on the back nine and went from a chance to win to a tie for 14th.

It's like that every week, and players could lose their minds looking back. English is all about moving forward. That included a trip Monday to Wisconsin to play Sentryworld. That's the home course of Sentry Insurance that sponsors the Tournament of Champions he won at the start of the year in Kapalua.

“It's like playing a round of golf,” he said of thinking how much various shots could cost a player over the course of a year. “Are you going to be into a 4-footer on No. 3 as much as as the 71st hole in a tournament? Everybody wants to be into their stuff in March. But when your back is up against the wall, it means more.

“You concentrate more. You take it more seriously. You know what's on the line.”

Next up is the PGA Tour postseason, two tournaments until Ryder Cup qualifying ends, three tournaments to make an impression as a captain's pick if he doesn't qualify. Ultimately, it's all about the next week.

“You know this time of the year if you play good golf, you reap more rewards,” he said.

Nelly Korda played the final two rounds with Aditi Ashok, the 23-year-old from India who came within one shot of a chance at Olympic bronze, mainly because of her putting.

As good as it looked at Kasumigaseki, it was even more impressive on paper. Ashok finished the four rounds at 13.019 in strokes gained putting, the most reliable putting statistic that analyzes how a player performs relative to everyone in the field.

According to Mark Broadie, the Columbia Business school professor who pioneered the “strokes gained” statistic, Brice Garnett at the Travelers Championship is the only player to have a better number on the PGA Tour this year.

Ashok's performance at the Olympics would have ranked 10th overall from every PGA Tour event dating to 2004.

A key figure at Augusta National died last week, even if he never so much as played in the Masters.

Golf Digest reports that Edward A. Heimann died on Aug. 1 in Cincinnati at 83. His greatest contribution to the club was its greatest identity. Heimann was the longtime chairman of Hamilton Tailoring Co. in Avondale, Ohio, which makes the green jackets awarded to the Masters champions and worn by club members.

Clifford Roberts, the co-founder of Augusta National, found the right man for the job. Heimann rarely acknowledged his company’s role in making the green jacket or granted interviews. He once told the Cincinnati Enquirer in 2000, “They don’t like us talking too much about this sort of thing. It’s a club of highly disciplined people who like to keep certain things private. It adds to the mystique.”

Xander Schauffele's gold medal also comes with a trip to Kapalua. The PGA Tour board voted to award the Olympic champion a spot in the Sentry Tournament of Champions to start the new year provided he is a PGA Tour member. ... Jensen Castle's victory in the U.S. Women's Amateur earned her a spot on the U.S. Curtis Cup team. She joins Gina Kim, Rachel Kuehn, Brooke Matthews, Emilia Migliaccio, Rose Zhang, Rachel Heck and Allisen Corpuz. The matches are Aug. 26-28 at Conwy Golf Club in Wales. ... The Women's British Open at Carnoustie next week is allowing 8,000 fans a day. ... The senior circuit for women's golf is now called “The Legends of the LPGA." ... Louis Oosthuizen at No. 8 in the FedEx Cup is the only player in the Wyndham Championship who could move to the top of the standings by winning. That would come with a $2 million bonus. ... Peter Uihlein is holding down the 25th spot going into the final event on the Korn Ferry Tour. The top 25 earns PGA Tour cards for next season.

Erik van Rooyen at the Barracuda Championship was the first 54-hole leader to win a PGA Tour-sanctioned event since Phil Mickelson at the PGA Championship in May.

“I don't even know where that is, but I'm so excited.” — U.S. Women's Amateur champion Jensen Castle on going to Wales to play in the Curtis Cup.