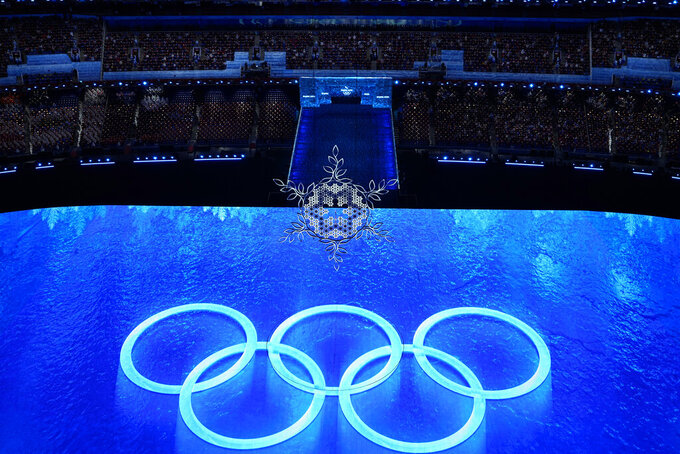 The Olympic Rings are seen during the closing ceremony of the 2022 Winter Olympics, Sunday, Feb. 20, 2022, in Beijing. (AP Photo/Jeff Roberson)

The Olympic flame has been extinguished in Beijing, marking the end of the most locked-down games in history.

It was the second pandemic Olympics in the more than two years since the coronavirus first emerged in China.

The movements of athletes, media and workers were heavily restricted and everyone wore masks and took daily COVID tests. There were only 463 positive COVID tests reported among thousands of people who came to Beijing for the Games.

Internationally, many denounced the IOC for holding the Olympics in concert with a Chinese government accused of human rights violations. Several Western governments boycotted by not sending any official delegations, though they sent athletes. China denied such allegations, as it typically does.

Attention now turns to 2024 in Paris, where officials hope for a COVID-free and scandal-free Summer Games.

Bach praised China and thanked the people of the country for staging the Games in a safe way.

It was the most locked-down Olympics ever, with participants restricted to a COVID-safe bubble where they took daily tests, wore masks and observed strict protocols.

He also thanked the volunteers who helped make sure the Games ran smoothly.

He said it “breaks our hearts” that some athletes could not attend because of the pandemic, but said they still belong to the Olympic community.

The president of the International Olympic Committee and the mayor of Beijing have handed over the Olympic flag to the mayors of Milan and Cortina d’Ampezzo in Italy, which will host the 2026 Winter Games.

This is the first time two cities have officially hosted the Olympics together. Cortina hosted the games in 1956. This will be the third Winter Games in Italy – Turin hosted in 2006.

After three straight Olympics held in Asia – Pyeongchang, Tokyo and now Beijing – the Games head to the West for the foreseeable future, with no chance of returning until at least 2030.

The next Olympics will be the Summer Games in Paris in 2024.

The winners of the men's and women's 30-kilometer mass start cross-country ski races have received their medals at the closing ceremony for the Beijing Olympics.

Alexander Bolshunov of the Russian Olympic Committee earned his third gold medal of the Beijing Olympics on Saturday. The race was supposed to be 50 kilometers, but it was delayed by an hour and shortened to 30 kilometers because of frigid temperatures and strong wind.

In the women's race on Sunday, Norwegian great Therese Johaug won her third gold medal of the Beijing Olympics. Jessie Diggins took silver for the best result by an American in an individual cross-country skiing event since 1976. Kerttu Niskanen of Finland won bronze.

The women also had to battle fierce winds and frigid temperatures.

Athletes who are still in Beijing after competing at the Winter Games are parading into the stadium for the closing ceremony as “Ode to Joy” plays.

The athletes had to undergo strict COVID protocols, including testing to get into the country, daily testing after they arrived and wearing masks except when they were competing. They had to remain within the Olympic bubble the entire time they were in China.

Not many tested positive, but those who did were taken to isolation hotels where they raised concerns about difficult living conditions and a lack of information.

The closing ceremony for the Beijing Games has begun, signaling the end to the second Olympics of the pandemic era.

There's a modest but enthusiastic crowd of invited guests shaking hand clappers and doing the wave at the Bird's Nest stadium.

Despite COVID concerns ahead of the Games, a strict system that basically turned the Olympics into a giant bubble kept coronavirus cases to a minimum. There have only been 463 positive tests among thousands of visitors inside the bubble since Jan. 23.

Internationally, many critiqued them as the “authoritarian Olympics” and denounced the IOC for holding them in concert with a government accused of human rights violations. Several Western governments boycotted by not sending any official delegations, though they sent athletes. China denied such allegations, as it typically does.

South Korean Olympic officials say they still want to include North Korea in helping host the 2024 Winter Youth Olympics and the IOC is also interested in the project.

South Korea is hosting the next winter edition of the Youth Olympics in two years’ time in Gangwon province. It will use some of the same venues as the 2018 Olympics, named for the town of Pyeongchang.

The 2018 Winter Games were held during a thaw in relations between the Korean neighbors, whose athletes entered the opening ceremony together and fielded a combined women’s hockey team.

Gangwon organizers have been in Beijing and Korean Olympic official Lee says: “The IOC has keen interest in this idea” of cooperating on hosting in 2024.

Hannes Bjorninen scored the go-ahead goal 31 seconds into the third period and Finland claimed its first Olympic men’s hockey gold medal with a 2-1 win over the Russian Olympic Committee on the final day of the Beijing Games.

Mikhail Grigorenko scored for the favored Russian team, the defending champions, in the second consecutive tournament without NHL players. The Russians won 4-3 over Germany in overtime in the gold-medal final at the 2018 Pyeongchang Games.

Finland completed the tournament with a 7-0 record.

Taiwan’s premier wants a Taiwanese Olympic speedskater to be punished for wearing what appeared to be a suit from rival China’s team during training.

Symbols of the two sides are especially sensitive at a time when China’s ruling Communist Party, which claims Taiwan as part of its territory, is trying to intimidate the island democracy by flying fighter jets and bombers nearby.

Fighting fierce winds and brutal temperatures, she went out front early in the race and held on, finishing in 1 hour, 24 minutes and 54 seconds. Johaug also won the skiathlon and 10-kilometer classic race.

American Jessie Diggins kept a steady pace behind the Norwegian as gusts whipped across the tracks, battering the skiers. She crossed the finish line 1 minute and 43.3 seconds behind Johaug to win silver. She had already become the first American woman to win an individual cross-country medal when she took bronze in the sprint earlier in the Beijing Games.

Strong wind gusts sent snow squalls across the frozen tracks as the women skied four laps on a 7.5-kilometer (4.6-mile) course with buffs pulled up over their hats, tape across their faces and extra layers under their racing suits.

Francesco Friedrich and Germany have finished off an unforgettable show in sliding at the Beijing Olympics.

Friedrich won his second Olympic gold medal in Beijing and fourth of his career by driving to the win Sunday in the four-man event, the final sliding race of these games.

There were 10 sliding events in Beijing. Germany won gold in nine of them and took 16 medals overall. The rest of the world combined had 14 medals in sliding.

Johannes Lochner won silver for Germany on Sunday and Justin Kripps of Canada got the bronze. Hunter Church was 10th for the U.S. and Frank DelDuca tied for 13th.

Eve Muirhead led Britain to the Olympic women’s curling gold medal — the first for the sport’s homeland since 2002 — with a record-setting 10-3 victory over Japan.

One day after the British men took silver, losing to Sweden in the final, the women picked up two points in the first end and controlled the scoreboard from there. They essentially clinched it in the seventh after Japanese skip Satsuki Fujisawa failed to keep her last stone in the scoring area.

That left just one red Japanese rock and three yellow British ones in the house. Muirhead easily picked off the Japan’s lone stone and scored four to take an 8-2 lead, bringing the biggest cheer yet from the British fans in the crowd.

Japan could only manage one point in the eighth. When Muirhead tallied two in the ninth, Fujisawa slid over to bump fists and concede. Another roar arose from the crowd, which included the men’s silver medalists.

It was the most lopsided women’s final in Olympic history.

It was the second straight medal for the Japanese team of Fujisawa, Chinami Yoshida, Yumi Suzuki and Yurika Yoshida, who took bronze in Pyeongchang. The Swedish women won bronze on Saturday night, beating Switzerland.

Mikaela Shiffrin and the American mixed ski team missed out on a medal by 0.42 seconds, losing in the bronze matchup in the final Alpine ski event of the Beijing Olympics.

The top-ranked Austrians won gold in the Winter Games’ second iteration of the mixed team parallel event, holding off Germany in the final.

The U.S. primarily used Shiffrin on the slower of the parallel courses, and she lost three of her four heats, including in the bronze matchup against Norway. Teammate River Radamus delivered the win the U.S. needed in the last heat to force a 2-2 tie, but he wasn’t fast enough to tilt the tiebreaker — combined times of the fastest man and woman — to the Americans’ favor.

Austria also tied in the final against the Germans, but Stefan Brennsteiner and Katharina Liensberger took their heats in a faster combined time than Lena Duerr and Alexander Schmid. Austra took silver in the event’s debut at Pyeongchang four years ago.

Shiffrin, a two-time gold medalist, went 0 for 5 in her bid for an individual medal in Beijing. She only reached the finish line at two individual events, coming in ninth in the super-G and 18th in the downhill.