In opening of Winter Olympics, chances at politicking abound 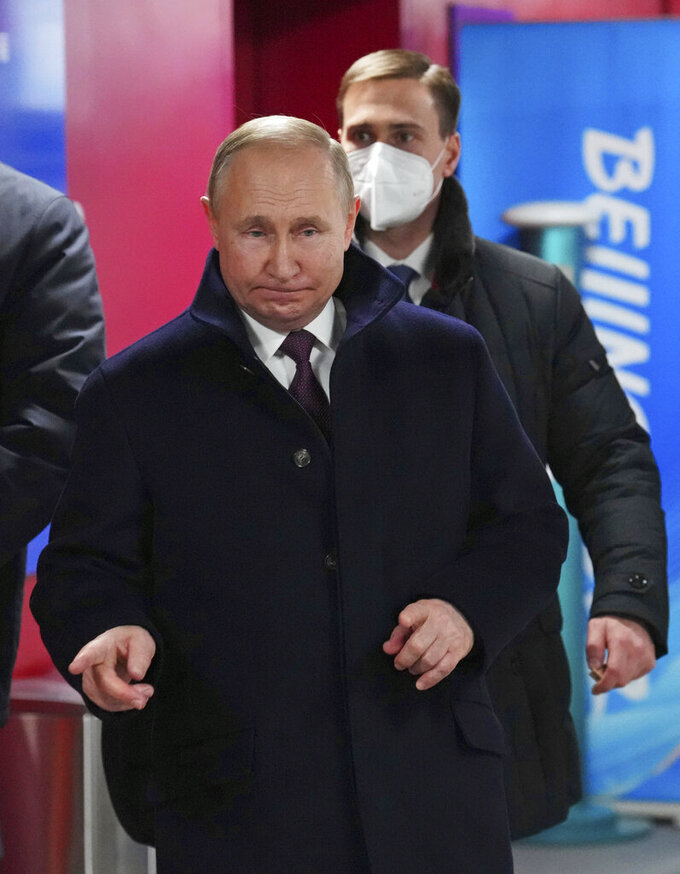 BEIJING (AP) — For all the talk of a diplomatic boycott, Chinese leader Xi Jinping has managed to attract a globe-spanning roster of presidents, royals and other dignitaries to the opening ceremony of the Winter Olympics.

The fact that most of them represent countries that are unlikely to win any medals — if they’re even competing at all — doesn’t seem to matter.

What does, from Beijing’s perspective, is presenting an image that China has emerged as a global power whose authoritarian style of government can go head-to-head with a world dominated by the U.S. and its fellow democracies.

“There is a strong authoritarian tilt among the list of leaders attending,” said Andrew Yeo, a politics professor at The Catholic University of America and senior fellow at the Brookings Institution. “It’s a much different list of global leaders when compared with the attendees of Biden’s Summit for Democracy last December.”

The guest list for Friday includes Russia’s Vladimir Putin, whose tens of thousands of troops are poised for a possible invasion of Ukraine. Also here: the heads of a good chunk of the rest of the former Soviet Union and the unelected rulers of several energy-rich Gulf Arab states. That leaves plenty of room for diplomatic intrigue and backroom deal-making for those making the trip.

One side effect of the pandemic has been to make face time with Xi more valuable than ever — even if it must be done behind a mask. The Chinese leader hasn’t been abroad in more than two years. His country has sharply limited international travel while pursuing a zero-tolerance policy in fighting the virus.

So anyone who wants to meet Xi, China's most powerful leader in decades, or other top officials like Premier Li Keqiang in person has to make the trip — no matter how powerful they are at home. And so they are coming, from Argentina and Egypt, from Kyrgyzstan and Azerbaijan.

Just as notable is who won’t be there. The United States and several other like-minded democracies are not sending political delegations as part of stated or unstated diplomatic boycotts of the games.

India became the latest nation to join the boycott Thursday after it emerged that a Chinese military commander involved in deadly clashes with Indian forces along their shared border in 2020 was reportedly chosen to be a torchbearer ahead of the Games.

While the decisions to keep officials away have dented the “propaganda coup” that Xi might have hoped for, the number of leaders that China has managed to attract is nevertheless testament to the country’s growing economic clout, according to Anthony J. Saich, a China expert at Harvard University’s Kennedy School.

“They do not want to be seen as slighting China,” he said. The mood this year, he added, has a very different feel from the 2008 Beijing Olympics, "when there was international and domestic enthusiasm for the games being held in China.”

That means that the countries most likely to take home medals, aside from Winter Olympics powerhouse Russia, aren’t among those gracing the Bird’s Nest skyboxes.

At least eight of the roughly 20 countries sending high-level officials have no athletes competing. That includes steamy Cambodia, desert-covered Egypt and the United Arab Emirates, which at least boasts an indoor ski slope in Dubai. Several others are fielding only a single competitor, including Saudi Arabia and Pakistan, both of whom have one male skier participating.

No leader aside from Xi himself is being as closely watched as Putin, a winter sports enthusiast who can use his visit to project a visage of business-as-usual statesman even as the U.S. and its allies fear he is preparing for war. His presence is also a reminder that Russia very much is at the Olympic Games even if the country’s athletes can’t compete under their own flag.

An overcoated Putin, standing by himself, waved from the stands as his nation's team — known once again as the Russia Olympic Committee because of doping sanctions — was introduced.

“This is more than a ‘sideline’ meeting,” Yeo said. “It involves the leaders of two great powers who are looking to strengthen diplomatic and economic relations at a time when both countries feel emboldened to challenge the United States.”

The Russian president met with Xi earlier Friday for their first in-person meeting since 2019. In his opening remarks, Putin said relations between the two nations are progressing in “a spirit of friendship and strategic partnership.”

The two countries issued a joint statement reflecting their shared views on global security and planned to ink more than dozen trade, energy and other agreements. Yuri Ushakov, Putin’s foreign affairs adviser, noted ahead of the meeting that China supports Russia’s demands for security guarantees that have underpinned the standoff over Ukraine.

Putin will have plenty of other leaders to talk to should he so choose. They include the heads of former Soviet states in Central Asia that Moscow sees, like Ukraine, as a natural part of its sphere of influence.

The region is also crucial for China’s ambitious Belt and Road trade initiative, and trade has surged in recent years. Friday’s attendees include the president of the region’s largest economy, Kazakhstan President Kassym-Jomart Tokayev, who enjoyed Xi’s support when he faced a spike in political unrest last month.

But some of the guests don't fit into neat geopolitical categories. Take the tiny Gulf state of Qatar, for example.

Its powerful emir, Tamim bin Hamad Al Thani, is fresh off a meeting with U.S. President Joe Biden on Monday in which his country was designated a major non-NATO ally and hailed as a “good friend and reliable partner.”

But as the world’s second-biggest exporter of liquefied natural gas, the 2022 World Cup host is also eager to secure more sales of the fuel to China. And it could prove to be a useful backup option for European gas supplies in the event they are cut or curtailed in a conflict between Russia and Ukraine.

And then there's Poland, the only European Union nation sending an elected leader to the Games. While he’s not the main decision-maker in Polish politics, President Andrzej Duda’s presence is noteworthy given the U.S.-led diplomatic boycott and concerns over a crisis in Ukraine, with which it shares a lengthy border.

Duda is scheduled to meet Xi, U.N. Secretary-General Antonio Guterres and Olympic Committee President Thomas Bach during his visit. His press office said the goal of those talks "is to encourage the interlocutors to play an active role in leading to Russia-Ukraine talks.”

Adam Schreck is director of Asia-Pacific news for The Associated Press, based in Bangkok. James Ellingworth in Beijing and Monika Scislowska in Warsaw contributed reporting.