Patriots plane ferries critical masks from China to US 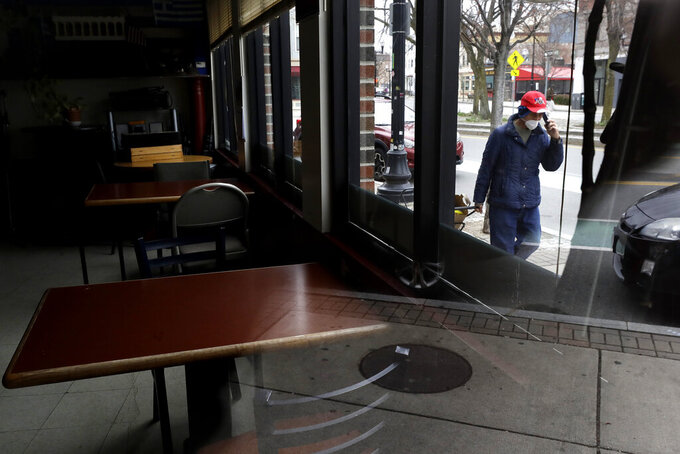 A passer-by walks past a closed social club, left, in Somerville, Mass., Thursday, April 2, 2020. Many people are working from home and many business have indefinitely closed out of concern about the coronavirus. (AP Photo/Steven Senne)

BOSTON (AP) — The New England Patriots private team plane returned to Boston from China on Thursday on a rainy afternoon carrying most of an order of 1 million masks critical to health care providers fighting to control the spread of the coronavirus.

Standing in front of the plane on the tarmac at Logan International Airport, Massachusetts Gov. Charlie Baker thanked Patriots owner Robert Kraft, officials in China who partnered with the state, and medical workers who need the masks.

“This shipment comes at a critical time as we prepare for an anticipated surge in the coming weeks ahead,” Baker said. “What we were able to accomplish with this particular mission will go a long way forward in this fight.”

Baker secured the N95 masks from Chinese manufacturers but had no way of getting them to the U.S. Baker said Thursday an earlier order for 3 million masks had been confiscated at the Port of New York and this time he wanted a direct humanitarian delivery to the state.

In an interview with Patriots.com radio Thursday, Kraft Sports and Entertainment chief operating officer Jim Nolan said the Chinese government didn’t sign off on the trip until March 27. He said the hurdles included legal logistics that were only cleared thanks to cooperation involving multiple state, U.S. and international entities.

Nolan said the Patriots received permission to land in China and got a waiver of a 14-day quarantine because the pilots didn’t get off the plane.

Baker said Thursday that Massachusetts could see between 47,000 and 172,000 COVID-19 cases during the current outbreak. That’s between .7 and 2.5% of the state’s population.

Baker said the numbers are based on models that also estimate the state’s peak of hospitalizations will come between April 10 and April 20.

He said the state is experiencing a mortality rate of 1.5% from the virus. He said that’s lower than locations like Wuhan, the city in China where the pandemic began, because of the state’s lower smoking rate, lower density, and an earlier start at social distancing.

Baker said the state is also expanding the number of intensive care unit beds by 500 and is awaiting the arrival of a machine that can sterilize tens of thousands of N95 respirator masks a day.

CASES ON THE RISE

The number of people in Massachusetts who have died from COVID-19 rose to 154 Thursday, according to state health officials. Nearly 9,000 residents have tested positive and more than 800 have been hospitalized since the outbreak's start. More than 56,600 have been tested.

For most people, the virus causes mild or moderate symptoms, such as fever and cough that clear up in two to three weeks. For some, especially older adults and people with existing health problems, it can cause more severe illness, pneumonia, or death.

Massachusetts lawmakers are working to pass a bill that would ban most residential and commercial evictions and foreclosures until 30 days after the COVID-19 state of emergency ends.

The bill would also bar landlords from charging late fees or sending reports to credit rating agencies if a tenant notifies them within 30 days that a failure to pay rent is due to a financial impact related to the COVID-19 emergency.

Evictions for criminal activity would still be allowed.

The House approved the bill Thursday.

State health officials on Thursday reported another three deaths at the Holyoke Soldiers’ Home, bringing the total number of deaths to 18.

Of those, 12 tested positive for COVID-19, two tested negative, three tests are pending and one is listed as unknown.

Another 23 veterans at the facility have tested positive along with seven staff members.

Coastal parkways providing access to state beaches will also be closed to parking and dropping off passengers. Beaches will remain open to pedestrians for walking, jogging, biking and solitary fishing.

Construction of a new 10,000-seat ballpark for the Boston Red Sox Triple-A affiliate in Worcester has been halted due to a ban on nonessential construction projects during the coronavirus pandemic.