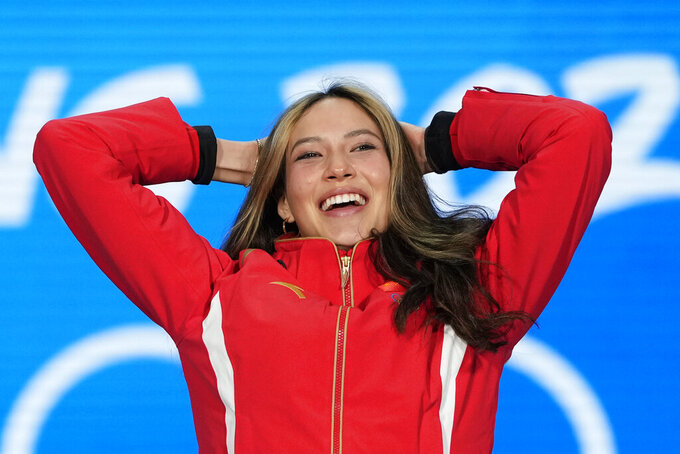 As freestyle skier Eileen Gu won her gold medal in the big air competition on Tuesday, praise for the San Franciscan quite literally overwhelmed the Chinese internet.

Sina Weibo, the massive social network that is similar to Twitter, found its servers temporarily overloaded, according to Chinese media. Of the top 10 trending topics on the platform, five were dedicated to adoration for the 18-year-old champion.

“Gu Ailing is a genius young woman right?” was one trending topic, referencing her Chinese name.

It was a stark contrast to the reception received by another U.S.-born athlete competing for China, figure skater Zhu Yi, who a few days prior came under attack on social media after she crashed into a wall during the team event. Zhu finished last in the short program and China placed fifth in the competition, which was won by the Russian team, with the U.S. taking silver and Japan bronze.

Weibo said it had suspended 93 accounts and deleted 300 abusive posts about the Olympian, who was born in California to Chinese parents and won a U.S. national novice title as Beverly Zhu. Messages mocked her for falling while others criticized her for not being fluent in Chinese.

“There's no next time,” wrote one Weibo user, under a video of Zhu crying at the end of her performance. “How shameful.” That comment was liked more than 45,000 times.

“Go back to America,” read another comment accompanied by a U.S. flag emoji.

The anger toward Zhu was likely fueled by an episode a few weeks earlier, when she qualified to compete at the Olympics.

She beat out two other skaters for the last spot on the Chinese team, which many fans felt should have gone to another young skater, Chen Hongyi, who had more competitive experience. It caused enough of a controversy at the time that the Chinese figure skating Olympic selection committee issued a statement defending the decision.

As online criticism of Zhu crested, Gu came to the defense of her teammate. “Making mistakes and pressure are all part of sports," Gu said at a news conference after her victory.

The two athletes are competing at a politically fraught moment, with a foot in each of two countries that have been clashing on a variety of issues, from economics to the lockup of China's ethnic Uyghur minority population in the western Xinjiang region to the origins of the COVID-19 pandemic.

Although Gu's decision to compete for China has gotten outsized attention, what she and Zhu are doing is fairly common in the international sporting arena. Zhu gave up her U.S. citizenship in order to compete for China in Beijing. It's unclear whether Gu has done the same; she has never commented publicly on the question of her citizenship.

In a sign of today's highly polarized political climate, both Gu and Zhu have faced criticism from conservative political figures and right-wing media in the United States over of their change of sporting allegiance.