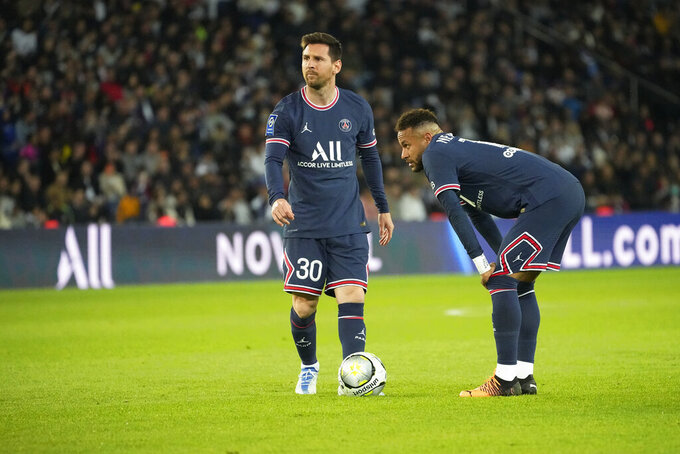 Even as their team was clinching a record-tying 10th French league crown late Saturday, disgruntled supporters preferred to express themselves by leaving before the end of the 1-1 draw with Lens so as to celebrate the title outside the Parc des Princes without the players.

“I don’t understand those things, because you win and you lose in football,” PSG midfielder Marco Verratti said. “We always try, we try with all our heart. We are normal people, we can have failures.”

“It was surreal that part of the crowd left the stands," Neymar told ESPN Argentina. "They’re going to get tired of whistling, because I have another three years left on my contract.”

Since the takeover by Qatar Sports Investments in 2011, PSG has been the most dominant club in France, winning eight of the last 10 titles. Only Monaco in 2017 and Lille in 2021 were able to disrupt PSG’s triumphal march.

Kylian Mbappe didn't have his shooting boots on against Lens, but he has been the driving force behind PSG’s latest title, leading the league with 22 goals and 14 assists. The France striker has arguably been the most valuable player at the club and in the league, outshining teammates Lionel Messi and Neymar.

Messi needed time to adapt in his first season in the French league after two decades in Spain, and still made a significant contribution with four goals and 13 assists.

Neymar faced fitness issues at the start of the season then was sidelined by an ankle injury for more than two months. But the Brazil striker is finishing the campaign strong, racking up 11 goals and five assists.

When Mbappe, Messi or Neymar couldn’t make the difference, their teammates stepped up. For instance, Morocco full back Achraf Hakimi scored twice in a 2-1 win at Metz in September. Marquinhos and Angel Di Maria scored to help PSG rally past Lille 2-1 in October.

This is Mauricio Pochettino’s first league title. The Argentine coach led PSG to a runner-up finish last season after replacing Thomas Tuchel in the winter. Pochettino couldn’t implement the high-energy brand of football he was known for at Tottenham in the English Premier League, especially with attacking players looking like passengers in some games. But his man-management skills contributed to maintaining a certain unity in the dressing room despite cliques and huge egos.

To a certain extent, the French league has become too small for PSG.

With international players in every position, PSG is pretty much running a fishing trawler while the other French clubs are still using fishing rods.

But to supporters, the season has felt like a regression because PSG was knocked out in the last 16 of the Champions League by Real Madrid after reaching the final in 2020 and the semifinals in 2021.

The Qatari owners have made no secret of their European ambitions. Catching Messi among other top signings last summer created considerable expectations of finally winning Europe's biggest club title. But despite all of the money splashed around, the collective expression of the team seemed smaller than the sum of its parts.

Supporters heavily booed PSG during a 3-0 win over Bordeaux in March, just a few days after PSG lost to Real Madrid 3-1 in the second leg of their last 16 tie. PSG won the first leg 1-0 and was leading 1-0 in the second leg when Real Madrid scored three goals in a 17-minute span. It was a collapse similar to the second-leg 6-1 loss to Barcelona in 2017 that rendered the 4-0 win in the first leg meaningless.

“We’ve had a difficult season since the defeat against Real Madrid,” PSG sporting director Leonardo said. “We’ve played in really surrealistic atmospheres. It was very complicated, like today.”

The disconnect with supporters has been ongoing. After the victory over Bordeaux, PSG supporters kept protesting at Parc des Princes by giving their team the silent treatment, refusing to back them with chants.

Even with the French league title in hand on Saturday, the players were booed at halftime for not being convincing enough.

The anger has not only been directed at the players, but also at the owners and Leonardo, questioning their vision and policies.

The club signed Italy goalkeeper Gianluigi Donnarumma even though it already had world-class goalkeeper Keylor Navas and good backups Sergio Rico and Alphonse Areola. Likewise, Georginio Wijnaldum was a regular starter at Liverpool, but proved a poor fit for PSG’s brand of football. Wijnaldum has made only 17 starts in the club's 34 league games.

Sergio Ramos was also signed despite his last season at Real Madrid being marred by injuries. Ramos was recruited to help PSG shine in the Champions League, but the Spanish veteran did not even play in that competition because of a calf injury and has made only nine appearances in the French league.

The club faces a big job to repair the deteriorating relationship with its supporters, some of whom believe that titles are not everything.