Quintet of US post players may be best group ever assembled 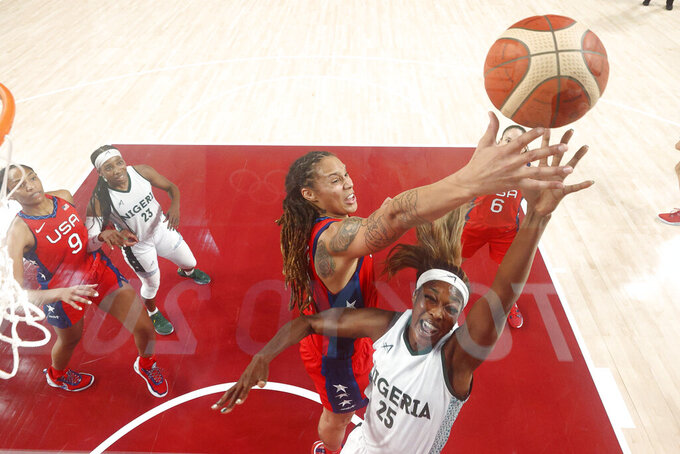 SAITAMA, Japan (AP) — The U.S. has an embarrassment of riches when it comes to talented post players, possibly the best ever assembled.

No team in world has the height, experience or depth to match up with the American bigs — a group of women that includes three of the last four WNBA MVPs.

Brittney Griner, A'ja Wilson and Breanna Stewart are an imposing starting front line at 6-foot-9, 6-5 and 6-4, respectively. Then the U.S. brings in 6-6 Sylvia Fowles and 6-4 Tina Charles off the bench. The quintet combined for 56 of the team's 81 points and 45 rebounds in the nine-point opening win over Nigeria.

“I mean the versatility is something that sets USA Basketball apart from everybody else. Our size and skill," Stewart said. "Being able to be 6-3, 4, 5, 6, keep going and to be able to pass, shoot and dribble is something that is special. I think I keep saying this all the time, but it’s great to be on the same side of the court as them.”

They could be together for at least one more Olympic run: the average is 29.

What makes this group even more dangerous then some of the previous U.S. teams that had stellar post players like Lisa Leslie, Venus Lacy, Yolanda Griffith and Tina Thompson isn't just the group's size, but as Stewart said, their versatility.

Stewart starts at the wing for this team — not her normal position. Charles has developed into a solid 3-point shooter. She’s making 37% from behind the arc this year in the WNBA while averaging a career-best 26.3 points — tops in the league.

Griner and Fowles, who are probably the most traditional of the post players have also developed mid-range shots. Griner, who is playing in her second Olympics, said it's scary how good this group can be.

“We have bigs that shoot 3s, feasting down low. handling the rock. it makes it really tough," she said. “It's tough to guard any of them on a night by themselves, put all of us together and that's a whole group I don't want to go against.”

Wilson, the rookie of the group, led the team in scoring in the opening win with 19 points.

“We are all very different and bring so many different aspects to the game,” the reigning WNBA MVP said. “We can be an inside-out team and have a high low game. To be one of the youngest of the post group I’m being a sponge to it all and taking it all in.”

While Nigeria tried to battle with the U.S. down low, the Americans next opponent has already said they won't even try. Japan's coach Tom Hovasse said that he’s going to have one of his “taller” players guard Griner when the two teams play on Friday.

“I’ll be guarding Brittney Griner with a 6-footer. That’s a challenge,” he said with a smile. “I always look at it as the opposite. We’re always going to be small. Brittney Griner’s going to have to guard a 6-foot player on the perimeter who shoots 3s. They have to go up and down the court. That’s looking at it as the glass is half full.”