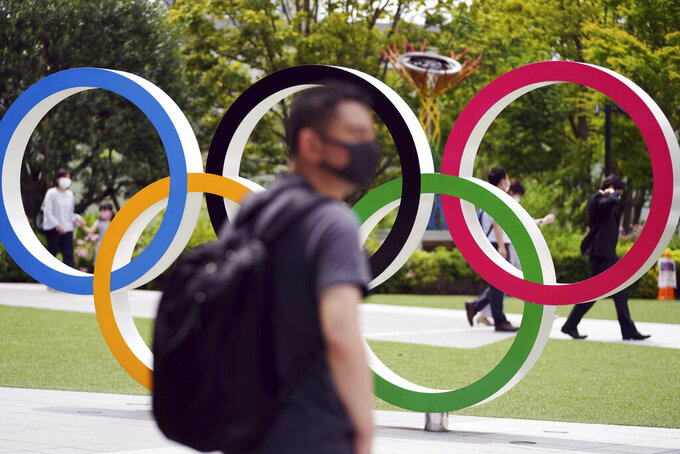 People walk near the Olympic Rings Wednesday, June 2, 2021, in Tokyo. Roads are being closed off around Tokyo Olympic venues including the new $1.4 billion National Stadium where the opening ceremony is set for July 23. (AP Photo/Eugene Hoshiko)

GENEVA (AP) — The refugee team for the Tokyo Olympics will have 29 athletes competing in 12 sports, including a medalist at the 2016 Rio de Janeiro Games who left Iran citing institutional sexism.

The team selected by the International Olympic Committee on Tuesday was drawn from 55 athletes who fled their home countries and got scholarships to train for the games in a new home country.

Kimia Alizadeh is among them five years after she became the first Iranian women to win an Olympic medal. She took bronze in taekwondo at age 18.

Alizadeh is based in Germany after she defected from Iran and criticized wearing the mandatory hijab headscarf.

“I have a great feeling to have made a decision for my life that would definitely change my future,” she told reporters in Germany in January last year.

The 29 athletes — a rise from 10 in the inaugural refugee team at the 2016 Rio de Janeiro Olympics — are also originally from Afghanistan, Cameroon, Congo, Republic of Congo, Eritrea, Iraq, South Sudan, Sudan, Syria, Venezuela. Nine from Syria is the most from any country.

“You are an integral part of our Olympic community, and we welcome you with open arms.” IOC president Thomas Bach told the athletes when announcing their selection, adding they would “send a powerful message of solidarity, resilience and hope to the world.”

Swimmer Yusra Mardini is now set to be a two-time Olympian after also racing in the 100-meter freestyle and butterfly in Rio.

“I feel very, very lucky to be part of the team," Mardini said at an IOC-hosted online news conference, acknowledging a “huge responsibility” to represent 80 million refugees worldwide.

“In an ideal world we would not have to have a refugee team, but this is the situation right now," said the 23-year-old from Syria who now lives in Germany.

The team will be managed in Tokyo by officials from the IOC and the United Nations’ Geneva-based refugee agency, the UNHCR.

"Surviving war, persecution and the anxiety of exile already makes them extraordinary people,” UNHCR High Commissioner Filippo Grandi said in a statement, “but the fact that they now also excel as athletes on the world stage fills me with immense pride.”

The refugee athletes will compete against 205 national teams with identifier EOR, for the French acronym of the team name. The Tokyo Olympics are from July 23-Aug. 8.

One national Olympic team will be missing in Tokyo. North Korea said in April it would not send a team, citing a need to protect its athletes from the “world public health crisis."

The IOC said after an executive board meeting opened Tuesday that it told governing bodies of Olympic sports to now reallocate entries for Tokyo which were due to be taken by North Korea.

In other business, the IOC said two if its 103 members are stepping down for personal reasons — Crown Prince Frederik of Denmark and United States cross-country skier Kikkan Randall, who was elected by athletes.

New members can be appointed at a meeting in Tokyo ahead of the July 23 opening ceremony, and nominations are set to be announced Thursday.

The meeting in Tokyo next month includes a proposal to formally amend the Olympic motto by adding the word “together” in Latin. It will become “Citius, Altius, Fortius — Communis,“ or “Faster, Higher, Stronger — Together.”