Rugby sevens stars on a mission to elevate Fiji, again 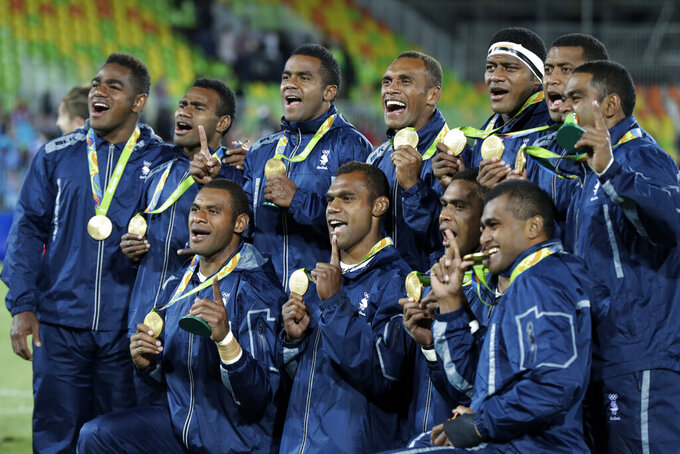 FILE - In this Aug. 11, 2016, file photo, Fiji rugby players show off their gold medal after defeating Britain in the gold medal mens rugby sevens match against Britain at the 2016 Summer Olympics in Rio de Janeiro, Brazil. It was rugby in fast forward and it generated millions of new fans across the world. Rugby sevens made its Olympic debut in Rio de Janeiro in 2016 bringing all the usual hard-hitting tackles, collisions and swerving runs but leaving out the slow-mo elements of the traditional 15-a-side game. (AP Photo/Robert F. Bukaty, File)

TOKYO (AP) — Jerry Tuwai and his Fiji teammates turned up on a Monday in May ready for a five-day training camp to prepare to defend their Olympic rugby sevens title. By Friday of that week, it was clear they weren’t going to be seeing their families up close for several months.

No hugs, no big send off. With coronavirus cases rising in the Pacific island nation, there was no way Fiji's most prized sporting assets could be risked.

They’ve been keeping in touch from bio-secure bubbles in Fiji, then in Australia and in Japan via calls and video conferencing, right down to streaming religious services regularly with extended families.

The aim is to be singing again on Wednesday in Tokyo to celebrate another Olympic gold.

“The calculations are that by the time we get back from the Olympics, it’ll be 18 weeks since they last saw their families,” Fiji coach Gareth Baber said. “I know other teams have done it. I know other people around the world have had similar experiences. We never wrapped it up as something that has caused us any difficulties ... (more) as an opportunity."

Tuwai, the world sevens series player of the decade, holds a special place in Fijian life as captain of the sevens team.

He was part of the squad that won the country's first Olympic medal of any kind with six straight wins in 2016, when rugby sevens made its debut.

A national holiday was declared and a country then reeling in the wake of a devastating cyclone stopped everything for the celebration.

Ben Ryan, the Englishman who coached that team, was rewarded with a grant of land.

Five years later, with parts of Fiji shut down because of the pandemic that also delayed the Olympics by 12 months, there's no question of what Tuwai and the team's Welsh coach need to deliver.

“I know there’s expectation in Fiji and I know where that comes from, that attachment to the ‘People’s Team,’ as we’re known,” Baber told The Associated Press in a telephone interview. “There’s a strong emotional and spiritual connection with the team and the way the team plays.”

The fast-moving rugby sevens format is almost part of the Fijian DNA. Kids grow up playing pick-up games in bare feet on any patch of ground that can serve as a field.

Famous for their one-handed off-loads and attacking flair, Fiji teams have been crowd favorites at sevens tournaments for decades.

“If we’re not your first team, then quite often we’re the second team that you love to support,” Baber said. “I can understand why — the culture of Fiji and the way people are, how the community is. How rugby is so common in every village and ... gives Fijians a sense of pride when they see, as they’ll say, their ‘warriors’ overseas doing battle. We are ambassadors of that.”

England-based Semi Radradra, who has played for Fiji in the 15s format and also in rugby league, has reinforced the squad in Tokyo.

He missed the Oceania tournament in Australia last month where Tuwai led the the Fijians to a title win over New Zealand and Australia in their first international competition in more than a year.

“He’s an exceptional sevens player. The skill levels he has — he’s been honed in Fiji on a sevens field,” Baber said of Radradra. “He’s a huge asset to have in relation to the culture he brings to the group. His sense of professionalism, the way he behaves and how he’s willing to and wanting to make himself part of that group to go and win a gold medal.”

It's Baber's job to be coach, coordinator and to front media interviews. It's the job of Tuwai, Radradra and the players to maintain a long legacy.

“They realize they’re on that mission,” Baber said, noting the people of Fiji needed an emotional boost during the pandemic. “Having us going and doing what we’ve traditionally done and elevating the country. It’s hugely important.”