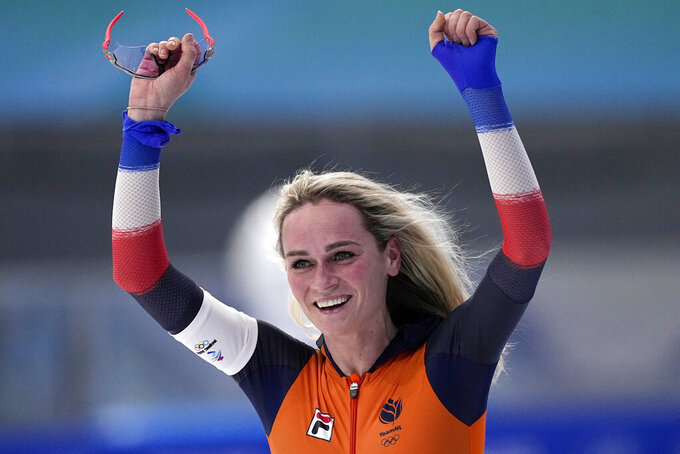 Irene Schouten of the Netherlands reacts after winning the gold medal and setting an Olympic record in the women's speedskating 5,000-meter race at the 2022 Winter Olympics, Thursday, Feb. 10, 2022, in Beijing. (AP Photo/Sue Ogrocki)

BEIJING (AP) — Irene Schouten already had a gold medal at the Beijing Olympics, so she was nice and relaxed for her next race.

No one else had a chance.

The Dutch speedskater completed a sweep of the women’s distance events, setting another Olympic record Thursday with a victory in the 5,000 meters.

Schouten won the 3,000 on Saturday, also setting an Olympic mark on the opening day of speedskating at the Ice Ribbon oval.

She was even more dominant in the longest women’s race with a winning time of 6 minutes, 43.51 seconds. That easily took down the 20-year-old Olympic mark held by Germany’s Claudia Pechstein (6:46.91).

“There was not so much pressure,” Schouten said. “In the 3K, there was a lot of pressure. In the 5K, it was more like, ‘I have the Olympic gold. Now I can just skate fast.'”

That she sure did, blowing away the 12-woman field.

Schouten finished 4.67 seconds ahead of silver medalist Isabelle Weidemann of Canada, while the bronze went to Martina Sáblíková of the Czech Republic in 6:50.09.

“Schouten is incredible,” Weidemann said. “Just watching her skate, she takes the level up so much. I hope in the future I can push her time and push the event even more. The faster more women can go, the better.”

Schouten skated at a comfortable pace early in the 12 1/2-lap race, essentially matching Weidemann's pace from the previous pairing.

But the 29-year-old Dutchwoman really turned it on at the end, eclipsing 32 seconds on her last five trips around the oval. Amazingly, the final lap of the grueling event was her fastest (31.18).

“When I saw the time of Isabelle, I was like ‘Oh (expletive), that’s really fast,'" Schouten said. “But then I skated and I felt really good. I could go every lap faster and faster.”

It was the seventh career medal for Sáblíková, making her the most decorated Czech Olympic athlete. She had been tied with cross-country skier Katerina Neumannova.

Despite her achievement, Sáblíková shrugged off any comparison to the greatest athletes from her central European country.

She pointed to dual-sport star Ester Ledecka, who won gold in snowboarding's parallel giant slalom to successfully defend her Olympic title from four years ago. She will try to defend her title in Alpine skiing's super-G on Friday.

“She is very great," Sáblíková said. “I don't think of myself like that.”

Sáblíková was the most recent skater to pull off the 3,000-5,000 double at the 2010 Vancouver Olympics. Schouten is now the sixth skater to win both events.

The same skaters finished in the top four of the 3,000, but the order was juggled a bit.

Weidemann moved up one place from bronze medalist in the previous distance race, while Sáblíková improved from fourth to third to claim a place on the podium.

“I really emptied the tank today. I gave all my energy,” Weidemann said. “I felt powerful going to the line. The 5K is something that’s very special to me. It’s the event that I love the most.”

Sáblíková posted her time with two pairings still to go, just as she did in the 3,000.

She worried that she'd get nudged off the podium again.

This time, it was good enough for bronze.

There was no change at the top.

Schouten gave the Netherlands its fourth gold medal in five speedskating events at the Beijing Games.

It looks like another rout for the Big Orange Machine, which also dominated at the oval in the last two Olympics.