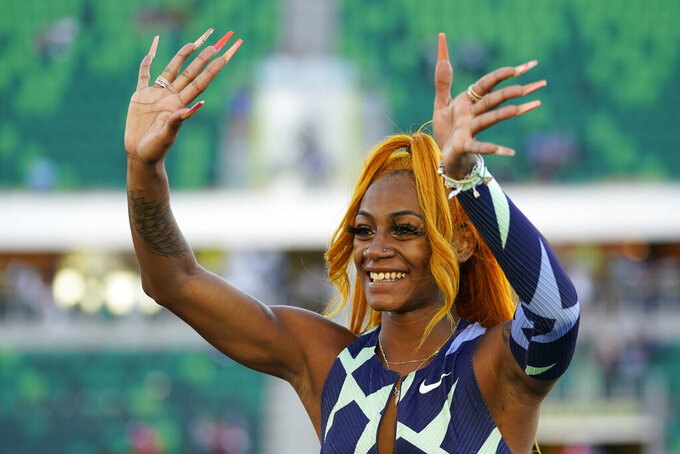 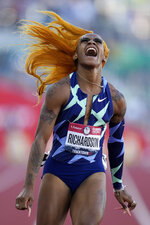 EUGENE, Ore. (AP) — Whether watching from Jamaica, Japan or the U.S. it was hard to miss that shock of flowing, orange hair that came streaking across the finish line first in Eugene on Saturday night.

It belongs to Sha’Carri Richardson. And after the eye-opening show she put on at Olympic trials — blowing away the field in the 100-meter semis in a wind-aided 10.64 seconds, then again in the final in 10.86 — she figures to grab her fair share of attention next month in Tokyo.

With her performance, the 21-year-old out of LSU picked up a spot in the Olympics and a national title while also setting up a possible showdown with the Jamaican world champion, Shelly-Ann Fraser-Pryce, who is well-known for her colorful hairstyles, too.

“It’s loud and encouraging and, honestly, dangerous,” Richardson said when asked why she chose the color orange for her big night. “Knowing I’m coming to one of the biggest meets there is, if you’re going to out there and be the best, you need to look the best.”

Richardson said crossing the finish line first was only the second-best feeling of the night. The best came afterward, when she climbed halfway up the stands at Hayward Field and shared a long hug with her grandmother, Betty Harp, who's also known in the family as “Big Momma.”

“To be able to have her here at the biggest meet in my life, and to cross the finish line and run up the steps to hug her knowing I'm an Olympian, actually that's probably better than winning the race,” Richardson said.

But that performance — it was pretty special, too.

An over-the-limit tailwind in the semis prevented the 10.64 from becoming official and leaving Richardson only 0.01 behind Fraser-Pryce's top time of 2021. The world record of 10.49 was set by Florence Griffith Joyner in 1988.

In the final, Richardson overcame a slow start to pass her training partner Javianne Oliver, a 60-meter indoor specialist who started in the lane next to her. Richardson beat Oliver by three body lengths and 0.13 seconds. Teahna Daniels finished third.

“It’s surreal to put together a full race,” Oliver said. “The 60, I had it. The last 40, I didn’t. I’ve been working on putting those two together and it came together today.”

While Richardson's blazing speed made her close to a sure thing in the women's 100, the men's sprint is nowhere near as settled.

The race for the three Olympic spots in their crowded 100 could be the best battle of the meet. They ran their qualifying heat Saturday, and all the “big” names made it through. That now includes Fred Kerley, whose main distance is the 400 but who made the 100 more interesting when, on the heels of a 9.91 earlier this season, he decided to be a short sprinter for this Olympic cycle.

“The bigger plan is still 400 meters for the next coming years,” Kerley said. "Right now, I’m focusing on getting everything correct and getting up my speed up so I can make history.”

He made it through his heat, and now Gatlin (the former Olympic and world champion) and Trayvon Bromell (this year's world leader at 9.77), and star-in-the-making Noah Lyles, whose chances are more secure in the 200, have something to worry about as they approach Sunday's finals.

“Everything is in preparation for the 200 as far as I'm concerned,” said Lyles, the world champion at 200 meters, in his strongest indicator yet of where his mind really rests for this meet.

In Saturday's only other final, Valarie Allman won the discus throw to make her first Olympic team, while in the women's 400 semis, Allyson Felix stayed on track to make her fifth by qualifying for Sunday's final.

Richardson will be a first-timer, poised to square off with Fraser-Pryce, who has six Olympic medals, including the gold in the 100 in both 2008 and 2012. Jamaica's Olympic qualifying is next weekend, though nobody's doubting Fraser-Pryce — aka “The Pocket Rocket” — will skate through.

So, it could be a showdown between a 34-year-old mom and a 21-year-old up-and-comer.

Asked about being so good, so young, Richardson sounded ready to take on the world.

“If you've been doing this for a long time and I step on the scene, I respect you for what you've done for the sport,” Richardson said. “But at the end of the day, when we get on the line, you have to do it against me.”