On the slopes, a struggle for Black skiers’ Olympic dreams 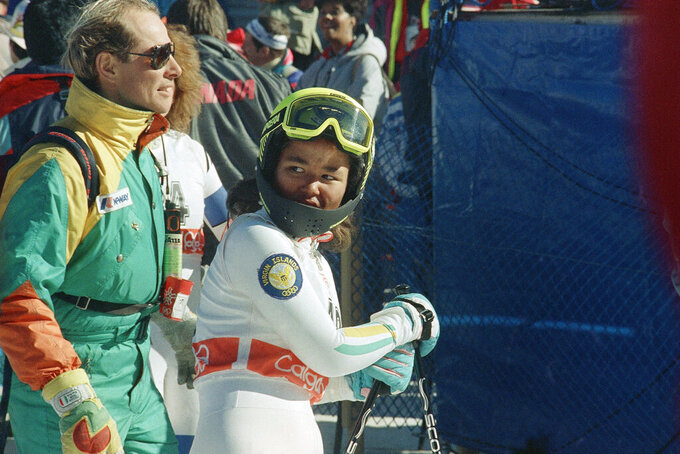 File- Skier Seba Johnson from the Virgin Islands looks back to see her racing time at the Olympic ladies Super-6 event at Mt. Allan in Nakiska, Alberta on Monday, Feb. 22, 1988. Johnson first saw skiing on a tiny black and white TV in the housing project where she lived in Fredericksted, on the island of St Croix. Nine years later, Johnson broke barriers during the 1988 Calgary Games, becoming the first Black woman to ski in a Winter Games, and at 14, the youngest. She relied on support from ski equipment companies, celebrities and other donors, and even then was able to spend far less time training than her competitors, due to socioeconomic barriers. (AP Photo/Rudi Blaha, File)

BEIJING (AP) — Take an informal survey of elite American Alpine skiers and snowboarders, and most can name an organization that exposes Black and Hispanic children from urban areas to winter sports.

Whether it’s on indoor halfpipes in New Jersey, or the Rocky Mountain slopes of Colorado and Wyoming, there seem to be plenty of programs aimed at developing a diverse new generation of skiers and snowboarders.

So where are the Black and Hispanic American athletes at the Winter Olympics?

The U.S. Alpine skiing team in Beijing is entirely white. The U.S. snowboarders and freestyle skiers include Asian American riders, but none who are Black or Hispanic.

“It’s incredibly unfortunate,” said Ryan Cochran-Siegle, an American silver medalist in super-G at Beijing. “We all want to figure out ways to close those gaps between different minorities and their access to skiing.”

The past and present of the alpine sports are both working against that goal. White and elitist, they were born in the mountains of Europe, and are flourishing for the most part in mountain communities without a lot of racial or ethnic diversity.

Then there is the cost: A single day of skiing can cost $100 or more, not including travel and equipment rental; owning your own gear costs even more. Wealth and easy access to resorts make a significant difference in one’s ability to progress from recreation-level participation to an Olympic path.

It’s one reason why few who make it to the Olympics are first-generation skiers, said Bode Miller, whose six Olympic Alpine medals are the most for any American skier.

“If your family didn’t ski, or you weren’t exposed to it through your upbringing, it’s just very unusual,” Miller said. “Your friends have to kind of push you into it.”

The solution to the lack of diversity in skiing and snowboarding, according to Miller and others, is creating access to the slopes for underserved communities.

Advocates say the kind of two-day-a-week programs that create space on the snow for Black and Hispanic children are making a difference. But not enough so yet to be seen at the Olympics.

A young athlete's chances of making an Olympic team increase significantly with intensive training at elite boarding schools or academies that can cost of tens of thousands of dollars.

But Schone Malliet, a Black CEO and founder of Winter4Kids, a nonprofit that makes winter sports accessible to New York-area schoolkids, says programs like his are about much more than training elite athletes.

“When you see these kids out here, and they’re in awe of what they see on a mountain and when they fall and get up and they keep going? That’s the deal,” Malliet said. “They change their whole perspective on their lives. Forget about skiing, snowboarding or cross-country, but just building the idea that, ’I can fall down and get up.'"

Racial diversity is still a novelty across most winter sports, not just skiing and snowboarding.

In Beijing, there is only one Black figure skater competing for any nation. On Sunday, American Erin Jackson became the first Black woman to win a gold medal in speedskating. In other events, a small number of Black and Hispanic athletes compete with longshot chances at medals.

There are, in fact, some people of color competing in ski events at the Beijing Olympics. They are from African and Caribbean nations -- Ghana, Nigeria, Eritrea, Jamaica. Haiti sent skier Richardson Viano to China as its first winter Olympian ever.

Jean-Pierre Roy, president of the Haiti Ski Federation, who was on hand Sunday to watch Viano ski in the giant slalom, skied in world championship races but said Haitians’ interest in the sport has taken off with Viano’s pioneering participation.

“There have to be dreams,” he said. “Without dreams there is no progress.”

Like Viano, who learned to ski in France after he was adopted by a French family, most of the African and Caribbean participants in the Games either trained or lived in countries with ski slopes and training facilities.

Sophie Goldschmidt, head of U.S. Skiing, said inclusion is a core value for her organization, but acknowledges the barriers to progress on skier diversity.

“Whether it’s sort of being cost prohibitive or just exclusive for other reasons, it’s something that I’m keen to change,” she said.

A 2021 audit of diversity, equity and inclusion of U.S. Skiing revealed the organization is almost entirely white. Just 1% of the organization’s staff identified as people of color, while all of its coaches and board members were white.

Seba Johnson first saw skiing on a tiny black and white TV in the housing project where she lived in Fredericksted, on the island of St Croix. She was awed. Seeing it in person at the age of 5 convinced her she wanted to be a ski racer.

Nine years later, Johnson broke barriers during the 1988 Calgary Games, becoming the first Black woman to ski in a Winter Games, and at 14, the youngest. She relied on support from ski equipment companies, celebrities and other donors, and even then was able to spend far less time training than her competitors.

“No one should have to beg for an opportunity to do what their heart desires,” Johnson, 48, said in an interview.

Although she competed at subsequent Olympics, representing the U.S. Virgin Islands, there wasn’t another Black woman in an Olympic Alpine ski event until 30 years later, when Kenya's Sabrina Simader skied in the 2018 Games at Pyeongchang.

She called it “heartbreaking” that Black representation in skiing hasn’t improved.

Alaska-born Andre Horton became the first Black man on the U.S. ski team in 2001, although he never competed at an Olympics.

Another Black skier introduced Horton to the National Brotherhood of Skiers, a Black-led organization advocating for greater representation in winter sports. The group’s convention in Aspen, Colorado, was the first time Horton saw large numbers of other skiers who looked like him. He said other attendees were awed by the sight of him in his national ski team uniform.

Horton recalls sharing a chairlift ride that day with a 70-year-old Black woman, who drove home how important Black representation is for the sport.

That’s exactly why the National Brotherhood of Skiers exists, says its president, Henri Rivers. It aims to clear racial and social barriers for Black athletes so they can focus on excelling in winter sports.

Even then, the Black and Hispanic skiers coming through the pipeline aren't ready to compete for spots on an Olympic team. They’d do better if the greater ski community embraced them and saw them as the future of the sport, Rivers said.

“They don’t even realize how many different obstacles are being put in their way to slow their progress."

Associated Press writers Howard Fendrich, Pat Graham and John Leicester contributed. New York-based journalist Aaron Morrison is a member of the AP’s Race and Ethnicity team on assignment at the Beijing Olympics. Follow him on Twitter at https://www.twitter.com/aaronlmorrison.