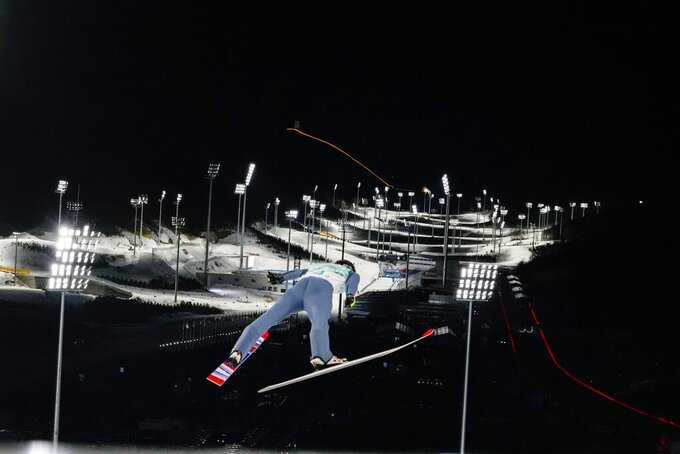 Evgeniy Klimov, of the Russian Olympic Committee, soars through the air during the mixed team first round at the 2022 Winter Olympics, Monday, Feb. 7, 2022, in Zhangjiakou, China. (AP Photo/Andrew Medichini)

“The second jump, I’m a little bit nervous about all of these disqualifications," Nika Kriznar said.

The team of Kriznar, Ursa Bogataj, Peter Prevc and Timi Zajc finished with 1,000.5 points, dominating the competition by more than 100 points.

“Even if you count all the distances and judge points from the unlucky ones on today’s competition, we should still be first so it’s still great," Prevc said.

The Russians won silver and Canada earned bronze, both of which were stunning results.

“This is a huge, huge achievement for the entire federation," said Evgeniy Klimov, who teamed with Irina Avvakumova, Irma Makhinia and Danil Sadreev.

The Canadian team of Alex Loutitt, Abigail Strate, Mackenzie Boyd-Clowes and Matthew Soukup left Calgary, Alberta, to train in Europe because the hills used for the Calgary Olympics in 1988 were shuttered.

“It gives us a chance to save our sport," the 18-year-old Loutitt said. “We’re four out of six of the national team members, and we have less than 30 kids at the club level.

“This gives us a chance to encourage people to try it, and fall in love with the sport."

Soukup acknowledged being surprised at the result.

Germany, one of the favorites to win, was disqualified after the first round because of a jumpsuit violation by Althaus, who won silver in the women's event Saturday.

Japan, with Olympic champion Ryoyu Kobayashi and Takanashi, finished fourth in the 10-nation field after Takanashi also had a jump disqualified. Kobayashi won on the normal hill on Sunday, becoming the first Japanese jumper to finish first in the event since Yukio Kasaya in 1972.

The Slovenians had a 49-point lead over Norway entering the final round, and floated to a lopsided victory.

Slovenian women and men, including Bogataj and Prevc, teamed up to win a mixed team World Cup event last month and showed that was not a fluke. Bogataj won Olympic gold in women’s ski jumping on Saturday night, four years after having the fewest points in the same event at the Pyeongchang Games.

“All the medals are really good for the development of the sport," Prevc said. “Right now in Slovenia, there’s a lot of kids jumping."

Men have been ski jumping at the Winter Olympics since the first one in 1924. Women did not have access to the sport at the Olympics until 2014.

The International Ski Federation hosted the first mixed team event in 2012, when Takanashi was part of the winning team, and it has been at the World Cup four times over the last decade.

While the women are finished jumping in China, the men have two more opportunities with the large hill event Saturday and team competition next Monday.