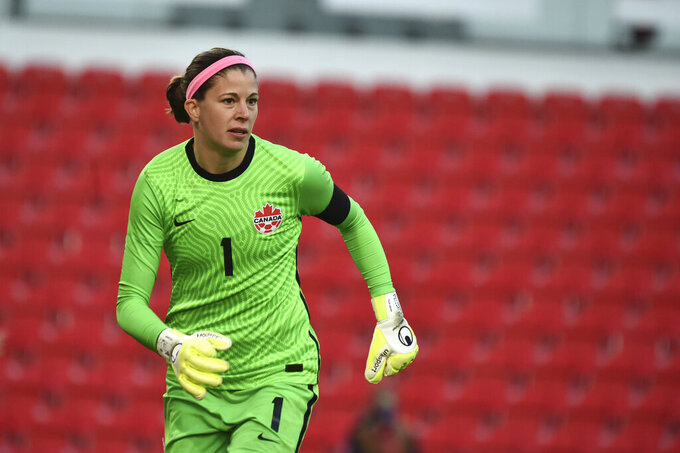 Stephanie Labbe, the goalkeeper for the Canadian women's national team that won the gold medal at the Tokyo Olympics, has announced her retirement.

Labbe released an emotional video on Wednesday explaining her decision. She'll step away from the national team in April. The 35-year-old recently left her club team, Paris Saint-Germain, playing her final match in December.

“In recent months, I felt both the weight and the lightness of what soccer has given me and what I was given back. I’ve poured my heart and soul into the sport. I’ve packed up my life and moved around with soccer for years. I’ve made hard decisions and left family and friends behind, all in search of being my best. I’ve pushed my physical and mental self to places I didn’t know were possible. I mastered the ability to be completely present and joyful in the highest pressure situations," she said. “And now I found clarity and peacefulness in knowing that I’ve left everything on the field.”

Canada clinched the gold medal by winning a penalty shootout 3-2 against Sweden after a 1-1 draw in the Olympic final last summer. It was the first major tournament title for the Canadians, who were the two-time defending bronze medalists.

“I can’t think of a better way to go out after such dedication to the program than with the world class performances we consistently saw from her on the biggest stage possible to win this country a gold medal," Canada coach Bev Priestman said in a statement. "I know Steph is ready to move on to the next phase of her life and on behalf of the team and Canada Soccer would like to thank Steph for her tireless commitment and what she has done for this country, she will be greatly missed.”

Labbe has long been open about her battles with anxiety and has become a staunch advocate of mental health care and access to services.

At the Tokyo Games, where Simone Biles was frank about her struggle, Labbe stressed the importance of bringing mental health issues to light.

"If someone like me can feel brave and courageous to talk about it, then maybe more people will be able to feel that strength and connect with that story," she told The Associated Press. “I think it makes you feel less alone -- and that’s what we all want, we all want that community, that support. So I think it’s really important that people are sharing their struggles.”

Labbe was one of three finalists for a FIFA Best award for women's goalkeeper of the year. Christiane Endler was named the winner at Monday's award ceremony.